Everything is bigger in Texas, and so is the case when it comes to investing in the oil and natural gas sector, according to a poll of top industry executives.

The results come from the Fraser Institute, a top Canadian think tank, which just published it’s 2021 Canada-US Energy Sector Competitiveness Survey and ranked 22 jurisdictions in North America – 17 within the United States and five Canadian provinces and territories. A total of 71 upstream senior executives answered a questionnaire based on 16 policy factors, including taxes, regulatory obligations, environmental uncertainty, political stability, and security.

Texas is the largest domestic energy producer in the United States, producing more than 1.4 billion barrels of oil and approximately 10.2 trillion cubic feet of natural gas between September 2020 and August 2021. With these production numbers surpassing that of every other state in the nation, it is no surprise that the Lone Star State is also the most attractive jurisdiction for oil and gas investment, according to Fraser Institute.

An overwhelming number of respondents indicated that barriers to investment were much less prevalent in the United States, with the Saskatchewan the top Canadian region at number 11.

Survey results suggest that Texas is the best place for oil and gas business, with Oklahoma and Wyoming close behind. The top 10 was rounded out by North Dakota, Kansas, Mississippi, Utah, Montana, Pennsylvania, and Louisiana.

The policy factors were compiled into a “Policy Perception Index” as shown in the chart below from the Fraser Institute. 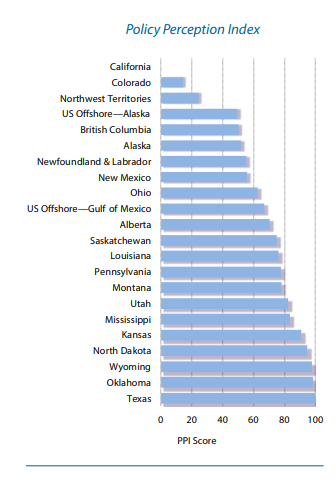 The report’s co-authors, Jairo Yunis and Elmira Aliakbari, discussed the findings and highlighted the favorable regulatory environment in the United States:

“This year’s respondents pointed to the uncertainty concerning environmental regulations, regulatory duplication and inconsistencies, and the cost of regulatory compliance as key areas of concern in Canada compared to the United States.”

Regulatory compliance, duplication and inconsistencies in Texas were only investment concerns for approximately 10 percent of survey respondents. EID has previously reported that Texas regulatory agencies work together to eliminate any, if not all, duplication. For example, the Texas Railroad Commission (RRC) and the Texas Commission on Environmental Quality strictly regulate the intrastate pipeline system through close communication and state-of-the-art technologies.

From an economic perspective, Texas offers a business-friendly climate and frequently ranks the best state for business thanks, in part, to the lack of corporate or personal income taxes. Houston alone houses the corporate headquarters for 44 out of 128 publicly traded oil and natural gas firms and employs almost 300,000 energy workers.

But these pro-growth conditions aren’t stopping oil and natural gas companies in the United States from making progress on environmental goals, as many have been committed to reducing or eliminating routine flaring. In fact, this ambitious target was led by the state of Texas which, according to the RRC, “has one of the lowest flaring rates of large oil and gas producing states in the country.”

Texas is home to the Energy Capital of the World, a large portion of the Permian Basin, offshore development from the Gulf of Mexico, and has now been ranked the most attractive jurisdiction for oil and natural gas investment.

What’s next for the Lone Star State?