The common “Keep It In the Ground” movement claim that “peak oil” demand is imminent was thoroughly debunked by a pair of International Energy Agency (IEA) reports released this week. IEA announced in one report that global oil demand and production crossed the 100 million barrel a day thresholds for the first time ever in the third quarter. And not only does the agency note in the report that, “There is no peak in sight for demand,” IEA forecasts in another report that global oil demand will grow another 9.6 million barrels per day from current record levels by 2030.

Much of this expected increase will be driven by the often-overlooked petrochemicals sector, which is also experiencing significant growth thanks to an abundance of shale oil and gas feedstock that has become accessible in the last decade, coupled with increasing demand in developing countries. From the IEA report:

“Petrochemical feedstock accounts for 12% of global oil demand, a share that is expected to increase driven by increasing demand for plastics, fertilisers and other products.

“Petrochemicals are set to account for more than a third of the growth in world oil demand to 2030, and nearly half the growth to 2050, adding nearly 7 million barrels of oil a day by then. They are also poised to consume an additional 56 billion cubic metres (bcm) of natural gas by 2030, and 83 bcm by 2050.” 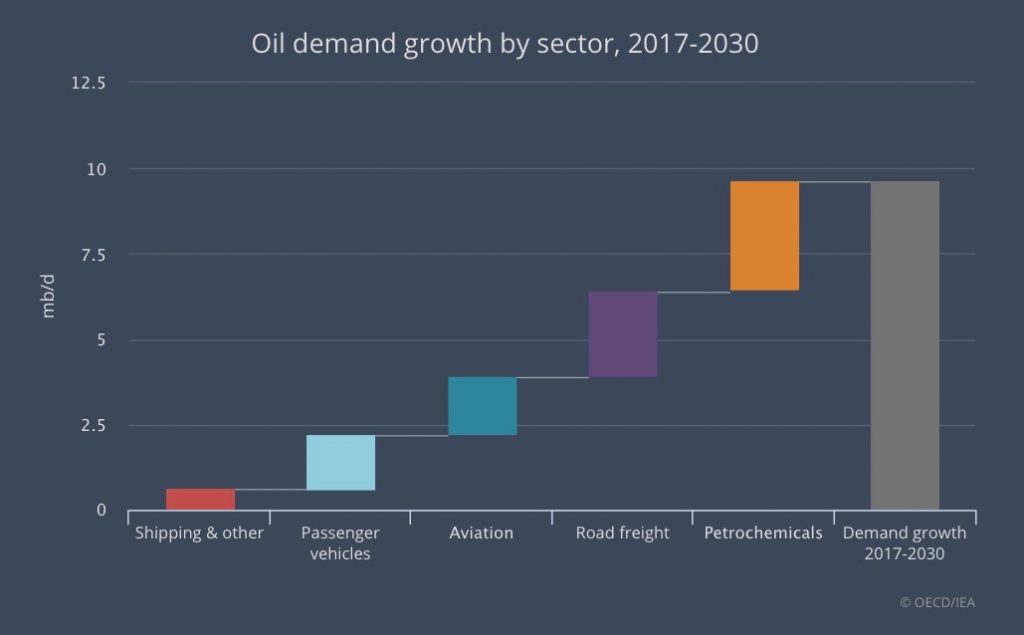 The IEA notes that it is tough to imagine a modern world without petrochemicals, which are ubiquitous in products everyone relies on to meet basic human needs. The fundamental role that petrochemicals play in meeting these needs will ensure increased demand as people live longer and the population increases:

“Underlying the demand for chemical products is the demand for services they provide, such as sustenance, mobility and thermal comfort. These services encompass human needs and the desire of the global population for improved living standards.”

The IEA petrochemical report also shows that the oil and gas industry will play an important role in a world that increasingly uses renewable energy and seeks to make products more sustainable. The report highlights how specific products that are often associated with lower oil and gas demand rely on the use of petrochemicals as part of the manufacturing process, such as renewables:

“Petrochemicals are particularly important given how prevalent they are in everyday products. They are also required to manufacture many parts of the modern energy system, including solar panels, wind turbines, batteries, thermal insulation and electric vehicles.”

In addition, IEA points out that the use of chemical products will also make the next generation of renewable energy products less costly:

Further, the growth in petrochemical products will also help reduce emissions in other sectors, according to the IEA. For instance, chemical products can be used to improve the thermal performance in buildings, improve efficiency in construction, and lightweight vehicles – all of which will lead to greater energy efficiency.

“After decades of stagnation and decline, the United States has re-emerged as a low-cost location for chemicals production thanks to the shale gas revolution, and is now home to around 40% of the global ethane-based petrochemical production capacity.”

Like every industry, there will be environmental challenges as use of petrochemical products increases. However, as the IEA highlights in its Clean Technology Scenario, there are ways that environmental impacts can be minimized in order to fully realize the immense benefits petrochemicals provide:

“The scenario provides an ambitious but achievable pathway to reduce the environmental impacts of petrochemicals: air pollutants from primary chemicals production decline by almost 90% by 2050; direct CO2 emissions reduce by nearly 60%; and water demand is nearly 30% lower than in the base scenario. It also emphasises waste management improvements to rapidly increase recycling, thereby laying the groundwork to more than halve cumulative, ocean-bound, plastic waste by 2050.”

Although the oil and gas and renewable energy industries are often portrayed as opposing forces, that is a false narrative that has been manufactured by extreme anti-fossil fuel “Keep It In the Ground” activists. In the real world, as renewables play a larger role in power generation and electric vehicles make up a larger portion of the vehicle fleet, demand for oil will continue to rise as the petrochemical industry meets demand for these new products. As the IEA notes: