Over the past year, we’ve been hearing a lot about how oil prices have led to a more difficult environment for U.S. producers, with headlines heralding “busts” and massive job losses.  But over the past few months, analysts have been noticing that despite price setbacks, not only have producers stayed remarkably resilient, but increased domestic oil and gas production has had the effect of tilting the balance of power to our favor. These days, it’s actually OPEC, and not the United States, that’s running scared in this new price environment.

Conventional wisdom is that late last year, as OPEC was losing its market share to the United States, the group decided not to cut production in the hopes that an oversaturated market would crush the commodity price, and force “high-cost” American producers out of business. Of course, this is hardly the first time in history that crude prices have fluctuated, but there’s an important difference about this particular downturn: OPEC made its decision not to decrease production from a position of weakness rather than power.  As economist Ambrose Evans-Pritchard stated in the Telegraph,

Maintaining relevance is something OPEC has been worried about over the past few years as U.S. shale production has ramped up.  In 2013, Saudi Prince Alwaleed bin Talal warned that rising U.S. shale production is “an inevitable threat” to Saudi Arabia and OPEC because “The world is increasingly less dependent on oil from OPEC countries including the kingdom.” And that prediction has certainly come true.  In a recent article, aptly titled “New Balance of Power,” the New York Times reports,

“For the better part of the last century, crude oil prices have swung like a pendulum, pushing and pulling the fortunes of nations. More often than not, global supplies of the volatile commodity were controlled by the rulers of desert domains who would otherwise have been powerless had it not been for the oil that bubbled beneath their thrones.

That pendulum is on the move again, sending the price of oil cascading to less than $45 this winter from more than $100 a barrel last June, and it may fall further in the months ahead. On the surface, this latest oil boom gone bust may feel like history repeating itself, but there is a vital difference this time: The center of the oil world has spun from the sands of Saudi Arabia to the shale oil fields of Texas and North Dakota, a giant new oil patch some wildcatters have begun to call “Cowboyistan.”

Put another way, the United States is overtaking the Organization of the Petroleum Exporting Countries as the vital global swing producer that determines prices. That remarkable change has been building since 2008, as American shale fields accounted for roughly half of the world’s oil production growth while American petroleum output nearly doubled. And shale production methods have proven highly adaptable to market conditions.” (emphasis added)

Thanks to the abundance of resources unlocked by the shale revolution, OPEC’s ability to impact the price of oil – both in a global context, and as it relates to what Americans pay for refined product at the pump – has significantly weakened. Last year around this time, as unrest ensued in major oil producing countries causing supply disruptions there, American families were shielded from the high gas prices that typically accompany these events.  As the New York Times reported just before Labor Day 2014, even though tensions were high in the Middle East and Africa, many Americans found themselves well able to afford to hit the road for the holiday. The Times explains the reason for this:

“The new source of American energy means more supply has been added to global markets — almost the exact amount that has been taken off the market at times because of unrest in the Middle East and Africa over the last five years.”

“With a dustup in the Middle East, you used to see a spike,” said the Dallas economist, who also listed production in the Canadian oil sands as a factor. “OPEC has kind of become irrelevant.”

As energy historian Daniel Yergin said in an op ed last year, several million barrels of oil had been missing from the oil market due to sanctions on Iranian oil and unrest in Libya, South Sudan, Nigeria and Yemen, but American energy development had been “crucial in compensating for the missing barrels.”  He continues,

“Without it, the world would be looking at higher oil prices, there would be talk of a possible new oil crisis, and no doubt Americans would once again start seeing images of those gas lines and angry motorists from 1973.”

Now, of course, U.S. producers are tackling an over-supplied market that has driven down prices and made it tougher to drill new wells.  While this has certainly led to setbacks, the industry has still remained robust, in large part due to efficiency measures – being able to get so much more with far fewer wells.  As Evans-Pritchard also points out,

Advanced pad drilling techniques allow frackers to launch five or ten wells in different directions from the same site. Smart drill-bits with computer chips can seek out cracks in the rock. New dissolvable plugs promise to save $300,000 a well. “We’ve driven down drilling costs by 50pc, and we can see another 30pc ahead,” said John Hess, head of the Hess Corporation.

It was the same story from Scott Sheffield, head of Pioneer Natural Resources. “We have just drilled an 18,000 ft well in 16 days in the Permian Basin. Last year it took 30 days,” he said.

The North American rig-count has dropped to 664 from 1,608 in October but output still rose to a 43-year high of 9.6m b/d June. It has only just begun to roll over. “The freight train of North American tight oil has kept on coming,” said Rex Tillerson, head of Exxon Mobil.

This sentiment was echoed by William Shughart in the Star-Telegram, who stated that

“The shale revolution, though not the boom it was a year ago, remains robust…More important, the oil and gas market has been transformed forever.

Since oil prices began falling, most shale producers have responded by embracing hard times, working to make their operations more efficient, renegotiating contracts with service companies (such as Halliburton) and, most significant, cutting production costs and spending on new wells.

Instead of slowing in the face of low oil prices, the rate of innovation seems to be accelerating.”

Bloomberg reported this week that producers in the Bakken region could still be profitable if even prices fall as low as $30 a barrel because they are operating under the highest efficiencies:

“The lowest crude prices in six years might not be enough to put the brakes on the U.S. energy renaissance.

Some parts of North Dakota’s Bakken shale play are profitable at less than $30 a barrel as companies tap bigger wells and benefit from lower drilling costs, according to a Bloomberg Intelligence analysis. That’s less than half the level of some estimates when the oil rout began last year.

The lower bar for profitability is one reason why U.S. oil production has remained near a 40-year high even as crude prices fell more than 50 percent over the past year to the lowest level since March 2009.”

UPI just reported that in North Dakota production is going strong due to the fact that companies are “able to produce more with fewer rigs because of the improved efficiencies. Others have started adding more rigs.” UPI also looked at production in the Denver-Julesburg shale where producers are reporting rising numbers.  As the article states, “Bill Barrett Corp. credited drilling efficiency and targeted spending for the boost in production from the Denver-Julesburg shale basin.”  On that same note, Canton Rep reported that “More natural gas is flowing from the Utica Shale, even as companies drill fewer wells.” In Pennsylvania, NPR quoted Penn State Marcellus Center for Outreach and Researcher Director Tom Murphy who stated that there’s been “decrease in the number of wells being drilled in Pennsylvania compared to last year but he noted the volume of gas being produced is increasing year-over-year.” The Energy Information Administration (EIA) Drilling Productivity Reports show this trend clearly through a number of charts illustrating production skyrocketing even as the rig counts significantly decline in top producing shales across the nation: 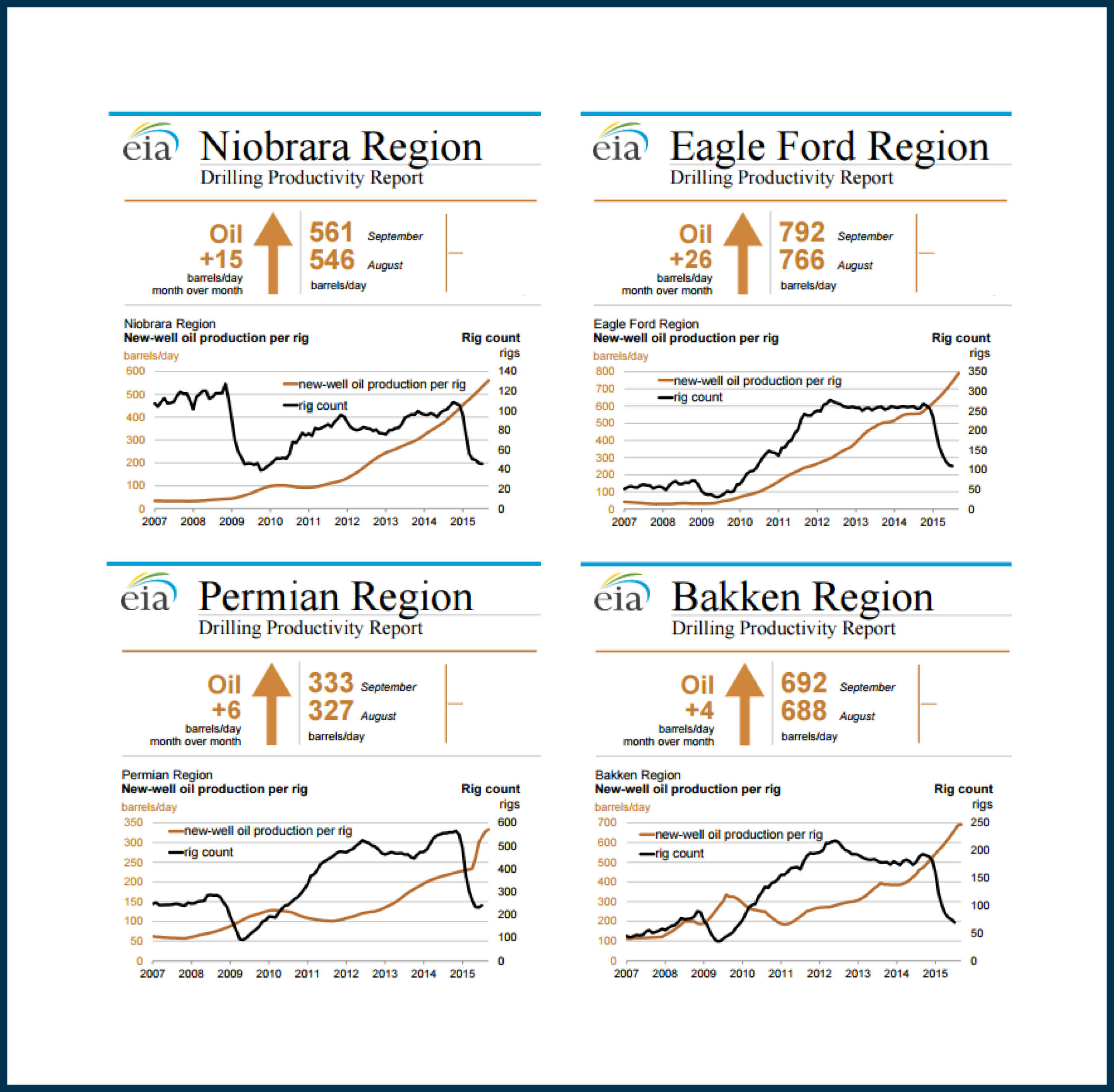 EIA has also found that U.S. production will continue to rise throughout the rest of the year with a possible decline in 2016.  The Wall Street Journal called EIA’s data a “blow to the Organization of the Petroleum Exporting Countries’ strategy to defend its market share.” The article went on to note,

“But if OPEC and Saudi Arabia aimed to wipe out U.S. shale oil companies by not lowering production back in November, they have not succeeded. If anything this ‘game’ has made the U.S. shale sector leaner, faster. Shale companies are simply no longer ‘high-cost.’ Lower break-even prices gives the U.S. shale industry the edge in the game of chicken it’s playing with Saudi Arabia.”

Even the Saudi central bank is essentially admitting defeat, explaining it its latest stability report,

“Concerning the second problem of excess supply of oil, it is becoming apparent that non-OPEC producers are not as responsive to low oil prices as had been thought, at least in the short-run. The main impact of the current lower prices has been to cut back on developmental drilling of new oil wells, rather than slowing the flow of oil from existing wells.”

This is not to say that the new price environment hasn’t been difficult for U.S. producers – but it is a very different downturn, which places the United States squarely in the position of power. And that’s a much better place to be in than the alternative.