Just when we thought the University of Missouri researchers couldn’t come up with an argument sillier than fracking causes low sperm counts, the same team is back with yet another study, this time claiming exposure to endocrine disrupting chemicals (EDCs) in fracking fluid causes problems with ovarian follicles in mice.

Of course, as EID has noted many times, one of the researchers of the study, Susan Nagel, actually appealed to anti-fracking activists Josh Fox, Mark Ruffalo and Yoko Ono to help her team fundraise for their research after their work was rejected by the National Institutes of Health for not being “good enough to be funded.” She also publicly endorsed Gasland in a talk entitled “What the Frack?” in which she called Josh Fox’s completely debunked films “educational” because they contain “a lot of good information.”

Against that backdrop of activism, the researchers exposed mice “to a mixture of 23 commonly used unconventional oil and gas chemicals at approximately 3, 30, 300, and 3000_g/kg_d, flutamide at 50 mg/kg_d, or a 0.2% ethanol control vehicle via their drinking water from gestational day 11through birth.”

Let’s just say if you give pregnant mice only contaminated water to drink – and at extremely high concentrations – is it any surprise that they might have abnormalities as a result? In other words, the researchers concocted the most unlikely scenario – continuous exposure to chemicals at high concentrations – and then tried to pass it off as plausible.

In their previous sperm study, the researchers used exactly the same dosages as this study – and at the time, they explained that these levels were nowhere near plausible in real life. In fact, the lead researcher, Christopher Kassotis admitted, it’s “unlikely people would ever be exposed to doses quite as high.”  This time, the researchers explain their high doses this way:

The two studies the researchers cite to back up that claim? Two studies done by themselves of course. One was their previous study on mice sperm, which suffers from the same flaws as this newest ovarian follicle study, and the other was a study the research team conducted that was essentially just a book report of studies – many written by activist groups like Earthworks and the Bucket Brigade – that have long been discredited. See EID’s blog post, which explains in detail the flaws in all the studies the Nagel team cited here.

But front and center of that “book report” study was the Nagel team’s first hormone study in which they claimed to have located EDCs from fracking in the water at a number of sites. EID has the full rundown on that study here, but since then, the researchers have been forced to admit that they had no scientific evidence to make any link between fracking and contamination at those sites. As Nagel stated last year in an NPR interview,

Meanwhile just about every study conducted by credible organizations has found that fracking does not provide a credible threat to drinking water. The one that most stands out is EPA’s five year study of fracking and groundwater – the most thorough study to date on fracking, which found,

EPA also looked as spills specifically and found the number of cases of water being impacted by development activities to be “small”:

EPA’s study is right in line with a “landmark study” by the U.S. Department of Energy in which the researchers injected tracers into hydraulic fracturing fluid and found no groundwater contamination after twelve months of monitoring. As Secretary of Energy Ernest Moniz recently said, “we continue to not see examples of the fracking itself, the hydrologic fracturing, compromising freshwater.”

Researchers at the University of Cincinnati recently completed a study in which they took samples before, during and after shale development, and found no groundwater contamination from fracking. Studies by the U.S. Geological Survey, the Government Accountability Office, the Groundwater Protection Council, California Council on Science and Technology, as well as studies by numerous universities, such as MIT, University of Texas at Austin and Yale have come to that same conclusion.

We also found it very interesting that in their previous sperm study, the researchers included a chart delineating the exact chemicals that they used, and also noted what other products contain those same chemicals. But in this new study the chart – or indeed the information on what exact chemicals were used – was not included in the study.

In the researchers’ previous sperm study, however, their own data showed the EDCs they used are located in dyes, perfumes, plastics, personal care products, detergents, cleaning agents, and the list goes on. Here’s that chart again: 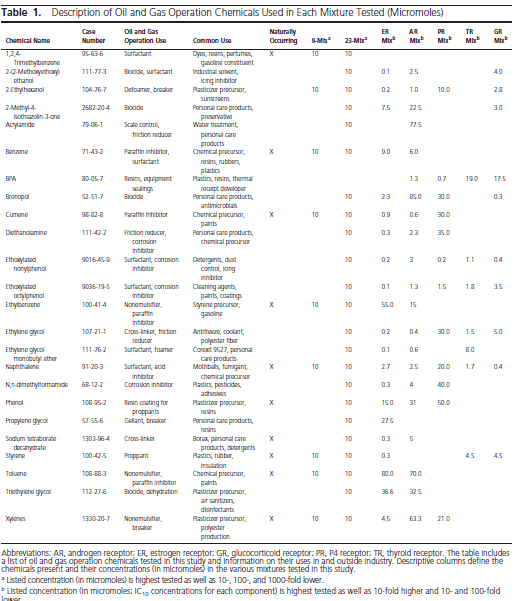 Six of these chemicals are also surfactants – chemicals what were recently found to be “no more toxic than common household substances” by a University of Colorado-Boulder report.

In order for a chemical to be of concern for toxicity there needs to be a concentration high enough to cause harm and a pathway for contamination. With chemicals making up less than one percent of the fracking fluid, and even EPA stating that there’s no credible threat to drinking water from fracking, it’s more likely that exposure to these chemicals is greater in your kitchen or garage.

This is likely not the last attempt will see from these researchers in their ongoing efforts to link fracking to hormonal problems – but all these attempts have one thing in common: they fail to do so.