Researcher: Anti-Fracking Studies ‘Cannot Tell Us That Oil and Gas Caused Any of These Health Outcomes’

Her team’s latest study that claims adverse health impacts associated with oil and natural gas development “cannot tell us that oil and gas caused any of these health outcomes,” admitted Lisa McKenzie, a researcher whose work is routinely cited by anti-fossil fuel activists, on a conference call hosted by an anti-fracking group last week. The call came after the study was debunked and disavowed by state health officials, and after her team already conceded that its latest findings “do not provide enough evidence to say that living near oil and gas wells causes leukemia or does not cause non-Hodgkin lymphoma.”

A team led by McKenzie, an assistant research professor at the University of Colorado, released a new study earlier this year that attempted to link oil and natural gas development to childhood leukemia. The study immediately became a talking point for “ban fracking” activists, even though it was quickly discredited by state health officials.

“What these studies cannot tell us is they cannot tell us that oil and gas caused any of these health outcomes. They’re not sufficient to make that temporal connection.”

“None of these studies show that living near O&G [oil & gas] wells caused the health outcome,” McKenzie noted in her presentation: 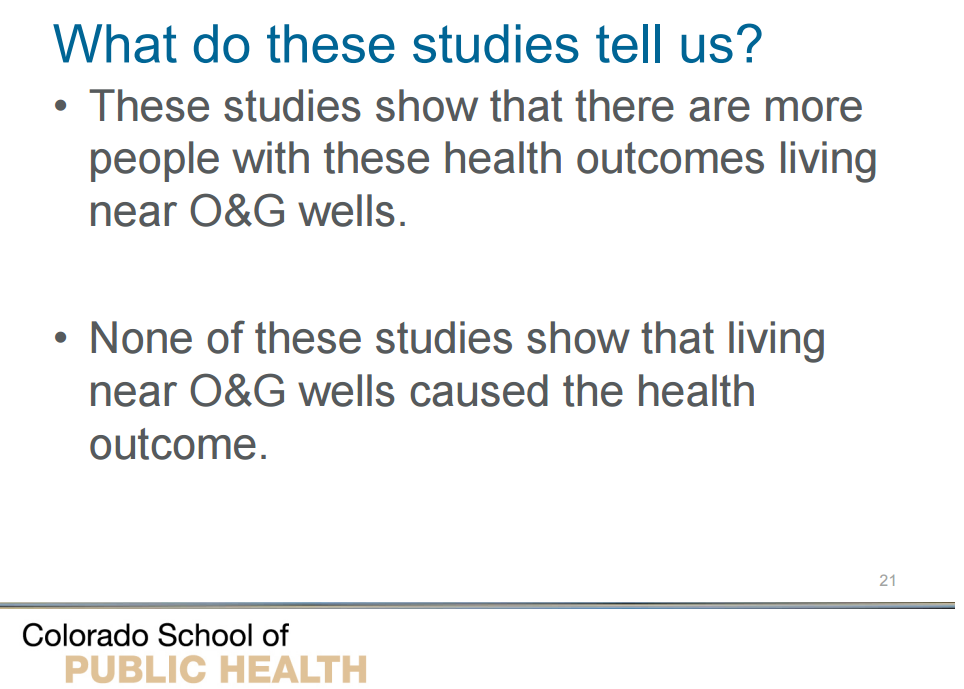 During the call, McKenzie also listed gaps in research about the health impacts of oil and natural gas development, such as baseline data, data on “actual exposures,” and confounding factors, that one would expect to be critical to establishing cause and effect for health outcomes:

“First of all, we don’t have studies out there that tell us what the baseline exposures were, so what were the levels of air contaminants and water contaminants before oil and gas development came into the area. We also are lacking data on what the actual exposures to people are. So we have concentrations in ambient air, we have some information on water, but we have very little information on what people living in oil and gas development areas are actually being exposed to. … We also need to get a better understanding, is it the oil and gas development in the area that is the source of exposures or is it something else in these areas that could be associated with these health outcomes.” 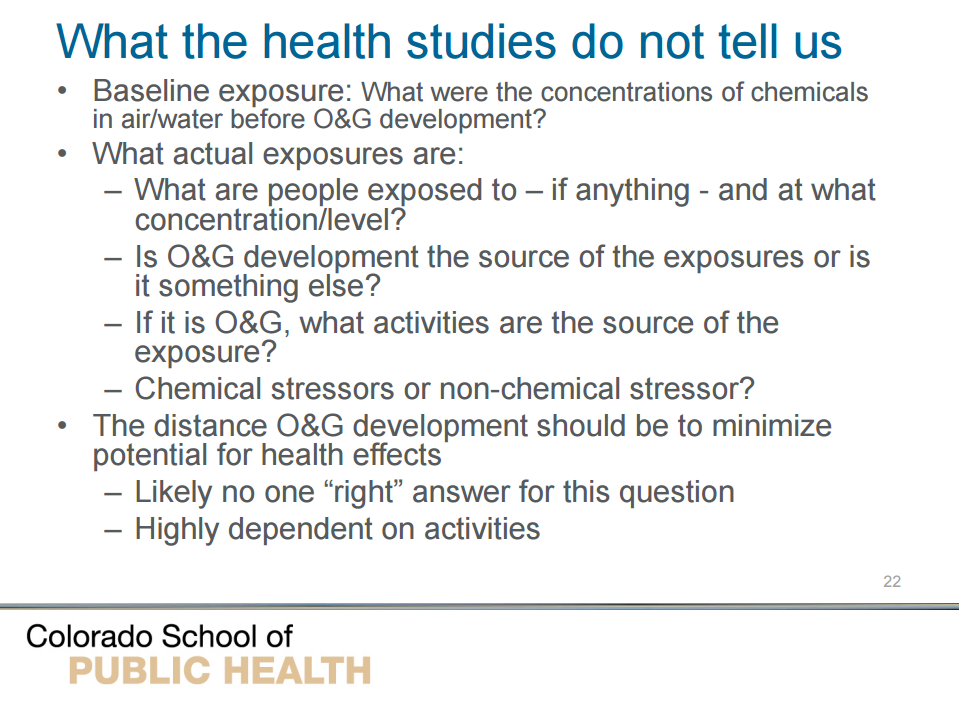 Quick reproof from state health officials followed by sheepish concessions from the researchers appears to be the chain of events we can expect of studies produced by McKenzie’s team. Her team’s 2014 paper that attempted to link oil and natural gas development to birth defects was promptly disavowed by the Colorado Department of Public Health and Environment, and its 2012 paper that attempted to connect proximity to natural gas wells to increased cancer risks forced concessions and qualifications from McKenzie on the findings.

Given McKenzie’s ties to activists determined to stop oil and natural gas development, the anti-fracking bent of her research is altogether unsurprising. Last week’s conference call was hosted by The Endocrine Disruption Exchange, which has claimed that the oil and natural gas industry is “steamrolling over vast land segments in the West” and has called oil and gas operations “cancer-like.”

McKenzie is also slated to speak at an upcoming event organized by “ban fracking” activists alongside Anthony Ingraffea, a “self-admitted advocate” whose research against oil and natural gas development has been repeatedly debunked; Dan Leftwich, an attorney who supports extreme activists and anti-fracking campaigns in Colorado; and Josh Joswick, an Earthworks organizer who has called the campaign against the oil and natural gas industry a “street fight,” “bar fight,” and a “back-alley fight.”

The “ban fracking” speaking circuit may be all that McKenzie can resort to these days. After all, she was originally scheduled to speak at a Broomfield town hall meeting in February but was removed from the agenda after her latest study was discredited by state officials.