A new study by researchers at Harvard University uses satellite readings to claim that U.S. methane emissions have increased 30 percent since 2002. This study comes while several reputable estimates – including the U.S. Environmental Protection Agency’s (EPA) latest Greenhouse Gas Inventory – show the exact opposite has occurred. Further, the researchers’ own data also do not support their narrative.

Predictably, headlines from anti-fracking echo chamber media outlets have trumpeted the study as evidence that fracking is to blame for the alleged rise in methane emissions. But the researchers actually admit they found no evidence that ties their findings of increased methane emissions to shale production:

“… The US has seen a 20% increase in oil and gas production [US IEA, 2015] and a 9-fold increase in shale gas production from 2002 to 2014 (bottom panel of Figure 1) but the spatial pattern of the methane increase seen by GOSAT (Greenhouse Gas Observing Satellite) does not clearly point to these sources. More work is needed to attribute the observed increase to specific sources.”

Indeed, as the following graphic from the report illustrates, there is no correlation between existing U.S. shale plays and areas the researchers found increased methane emissions. In fact, the graphic shows methane emissions are actually greater in many areas with no shale development and/or little to no oil and gas production. 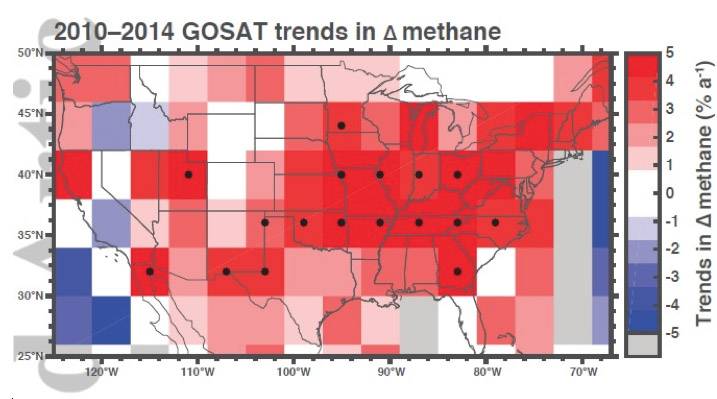 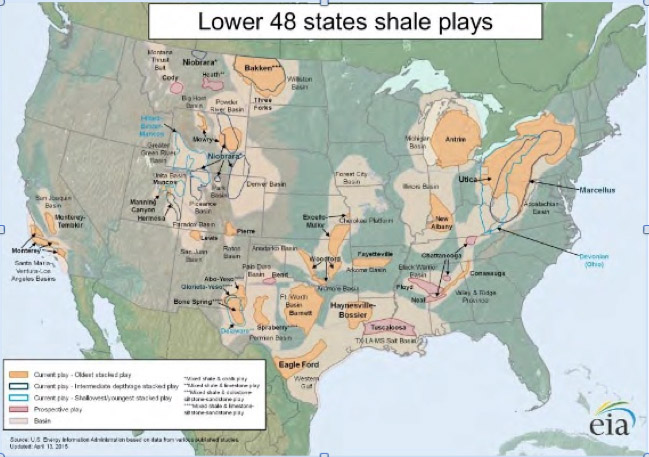 Many of the areas highlighted in red to illustrate increased methane emissions in the first graphic – including Illinois, south-central Pennsylvania, far northern and far southern California, New York state, North Carolina and Nebraska – have no shale development. Other states highlighted in red such as Iowa, Minnesota, Wisconsin, Missouri and Georgia have no oil and gas production at all, yet have seen huge spikes in methane emissions, according to the study.

The researchers admit that their method of using satellite retrievals (along with a single surface observation in Oklahoma) to compile their data inhibited them from determining specific sources of methane emissions.

“The trend is largest in the central part of the country but we cannot readily attribute it to any specific source type.”

Fortunately, there is a reasonable explanation as to why the central part of the country is the area the study found had the biggest increase in methane emissions between 2010 and 2014. 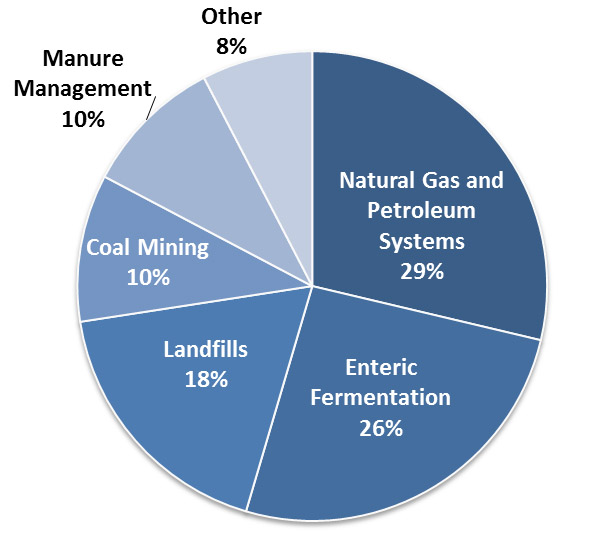 The researchers’ findings clearly (if unintentionally) demonstrate this trend.

Coal mining is also a major source of methane emissions. That could explain why top coal producing states such as Kentucky, Illinois and Virginia all have seen major methane emission spikes, according to the study. Again, none of these states has any significant shale production. 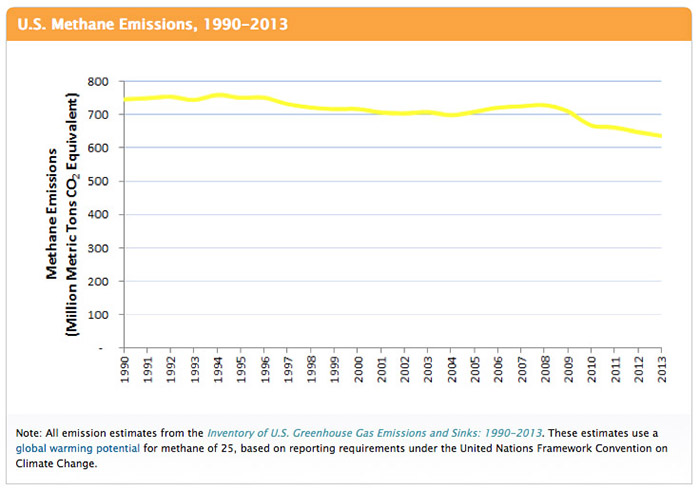 EPA also acknowledges that methane emissions from oil and natural gas fell 11 percent from 2005-2012 and that trend continued in 2013, as below EID graphic illustrates, and in 2014 as well, as methane emissions from the petroleum and natural gas systems sector dropped from 77.2 million metric tons CO2 equivalent in 2013 to 73 million metric tons CO2 equivalent in 2014.

The EPA credits voluntary implementation of new technologies by the oil and natural gas production industry as major reasons for the recent decline in emissions, among other operational improvements:

This could explain why the study found areas with significant shale and conventional oil and gas production such as Wyoming and Colorado have seen no significant upward trend in methane emissions, according to the study. The Barnett and Eagle Ford shale regions in Texas have also seen much lower increases when compared to states with no oil and gas production such as Iowa and Georgia. Kern County, California’s only significant shale production area, has actually seen a downward trend in methane emissions from 2010-2014, according to the study.

These facts haven’t stopped anti-fracking activists such as Robert Howarth from telling groups like Climate Central that shale development is to blame:

“I believe the U.S. probably is responsible for this much of an increase in global methane emissions. And, the increase almost certainly must be coming from the fracking and from the increase in use of natural gas.”

This study and EPA data does not support Howarth’s assessment, however, and it illustrates how shale production opponents such as Howarth continue to ignore evidence that methane emissions are not only falling, but can be attributed to several other sources other than oil and gas production.

The Intergovernmental Panel on Climate Change’s (IPCC) latest assessment made it clear, it’s largely because of hydraulic fracturing and natural gas that the United States has been able to reduce its GHG emissions dramatically:

And a recent report from University of California-Berkley physics professor Richard Muller highlights the fact that methane’s actual 20-year global warming potential is 11 rather than 86 due to the fact that methane is much lighter than CO2. Muller also points out that methane essentially evaporates in the atmosphere are 20 years, with just .003 percent remaining after 100 years, compared to 36 percent for CO2.

These are just a couple reasons University of Oxford atmospheric physicist Raymond Pierrehumbert has been a vocal critic of scientists/anti-fracking activists such as Howarth and Anthony Ingraffea, who continue to focus on methane emissions. Pierrehumbert offered the following assessment of the Harvard report to Climate Central:

“It is always useful to know what the emissions of various greenhouse gases are, but methane is still just a sideshow, and relative to what the U.S. needs to do to fulfill its Paris commitments with regard to keeping the warming under 2°C, even a substantial upward revision of methane leakage is almost completely irrelevant. The warming due to steady methane emissions essentially stops increasing after just two decades, and is largely reversible once the leakage stops.”

This report is the latest in a barrage of misinformation on methane emissions being pushed by fracking opponents. Fortunately, its data actually paint a positive picture, showing methane emissions from oil and gas development are low, and that natural gas, thanks to fracking, is providing significant climate benefits.