A recent report by Reuters alleges that tax rates on Oklahoma oil and natural gas producers created a budget shortfall that forced the state to cut education spending. But a closer review shows that the Reuters report is without merit. The report oversimplified a statewide problem, while simply using the oil and natural gas industry as a scapegoat.

Reuters wasted no time in attacking the oil and natural gas industry, with its first line reading, “After intense lobbying, Oklahoma’s oilmen scored a victory two years ago.” The introduction goes on to claim that lawmakers “voted to keep in place some of the lowest taxes on oil and gas production in the United States,” which cost the state $470 million last year, according to Reuters.

The state of Oklahoma is facing a projected $1.3 billion budget shortfall next year, and as a result, the state has cut a variety of public services, including education. But blaming this on the oil and natural gas industry requires the use of dubious assumptions, including a denial of basic economics.

Key problems with the Reuters report:

Before describing the failures of the Reuters “investigation” in detail, it’s worth explaining the tax structure in Oklahoma as it relates to oil and natural gas development.

Since the mid-1990s, horizontally drilled wells in Oklahoma have been taxed at a rate of one percent of production. As recently as 2011, the overwhelming majority of wells drilled in the Sooner State were vertical wells, which were taxed at a rate of seven percent.

There were several reasons for the discrepancy. Horizontal and directional drilling dates back nearly a century, but innovations in the latter years of the 20th century suggested that horizontally drilled wells could become a game changer in terms of domestic production. By accessing more of the oil- or natural gas-bearing formation, a horizontal well can produce more than a traditional vertical well. Moreover, production from a horizontal well can replace several vertical wells, which means less land disturbance.

The state of Oklahoma wanted to incentivize this, so it established a tax system where horizontal wells would be taxed at a rate of one percent for the first four years, when production is highest, and then seven percent thereafter.

In the early to mid-2000s, the use of horizontal drilling – paired with hydraulic fracturing, or fracking – began to expand significantly across the country, helping to launch the so-called “shale boom” that would ultimately propel the United States into the largest combined oil and natural gas producer in the world.

In 2014, however, the legislature overhauled the tax structure, doubling the initial rate on horizontal wells (from one to two percent) and cutting the rate on vertical wells (from seven to two percent). After three years of production, both types will be taxed at seven percent.

In 2012, the number of horizontal well completions surpassed the number of non-horizontals in Oklahoma for the first time. In 2015, only 341 vertical wells were completed, compared with 1,309 horizontals.

The Reuters report glossed over or omitted entirely the facts described above. In fact, Reuters leads the reader to believe that horizontal well completions have long exceeded the number of verticals, noting that “over the years” since the tax structure was put in place, horizontal wells “became common and far more productive.”

Reuters even laments that “Oklahoma’s lawmakers repeatedly extended the tax breaks on horizontal wells,” failing to mention that every year the tax system was renewed, the number of vertical well completions far exceeded the number of horizontals in Oklahoma, as the chart below illustrates: 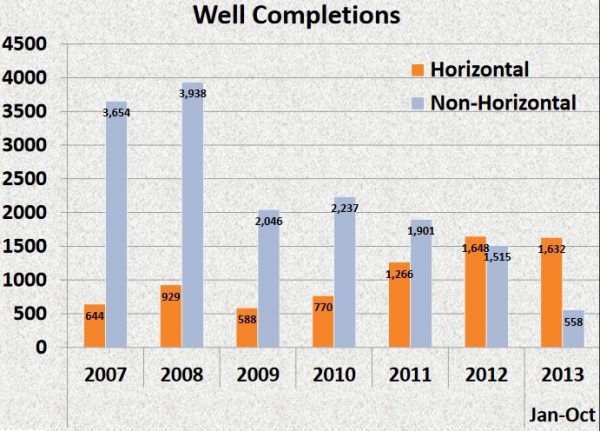 Reuters would have had to tell an entirely different story had it accurately reported that the lower tax for horizontal wells was enacted when they constituted a minority of completions in the state, and the legislature doubled the tax on horizontals only after they became the dominant well type. In its most recent tax overhaul, the legislature actually shortened the period when horizontal wells would receive a lower tax rate period by 25 percent.

Reuters also failed to describe the broad support that this change enjoyed. While the report did note that the legislature approved the new system by a two-to-one margin, it omitted that farmers, mineral owners, and the State Chamber of Commerce supported the change. Tom Buchanan, president of the Oklahoma Farm Bureau, said that failing to pass the reform would have been tantamount to “raising taxes on landowners.”

The Oklahoma Farm Report noted that had the legislature not approved the new system in 2014, the higher tax rates “could have led to drilling operations being moved to more cost-competitive states, taking jobs, capital investment and royalty payments with them.”

The National Association of Royalty Owners (NARO), which represents millions of mineral owners across the country, also supported the tax change. The average Oklahoma royalty owner makes less than $500 a month in royalty income and is 60 years old, so an increase in the severance tax is essentially a tax increase on a large number of senior citizens.

A poll released in the spring of 2014 showed that nearly 70 percent of Oklahomans opposed increasing the horizontal well tax.

Reuters ignored all of that support, and wrote only that “drillers cheered the outcome,” and “oil companies found a sympathetic audience at the capitol.”

The state’s decision to cut education funding, however, forms a core element of the report. Had oil and natural gas companies been taxed at a higher rate, Reuters suggests, some of those education cuts could have been prevented.

The title of the report makes it clear who Reuters is blaming: “When the oil boom went bust, Oklahoma protected drillers and squeezed schools.”

But the supposed “lost revenue” that Reuters cites is based not only on a denial of basic economics, but also the omission of hundreds of millions of dollars in taxes paid by energy companies.

Reuters claims, for example, that the new tax rates on horizontal and vertical wells cost the state $470 million in fiscal year 2015. This is only true if one assumes that raising taxes on production by 600 percent will yield the same amount of production. Reuters simply asserts – without any explanation – that a six-fold tax increase will have no impact on the activity being taxed.

As Dr. Greg Mankiw – an economist whose textbooks are used in universities across the country – wrote in the New York Times, “A good rule of thumb is that when you tax something, you get less of it.”

Reuters acknowledges that some of its figures came from the Oklahoma Policy Institute, although Reuters failed to disclose that OPI has lobbied for years to raise taxes on Oklahoma energy companies. Chad Warmington with the Oklahoma Oil and Gas Association (OKOGA), has previously criticized OPI’s methodology, noting that the group “makes the assumption that if Oklahoma raised the gross production tax rate by 600 percent, as they would like to see happen, that it would have no negative effect on the drilling activity in the state.” Warmington added that it’s a “hugely flawed assumption.”

An editorial by The Oklahoman – the state’s largest newspaper – last year called OPI’s calculations “untethered from economic reality,” “too good to be true,” and “highly misleading.” Reuters cited the figures without scrutiny.

Those millions of dollars are paid to suppliers, shippers, service companies, manufacturers and local businesses. Each purchase yields sales taxes that flow to state coffers, and the indirect jobs supported also generate additional income taxes. One analysis has estimated that the direct value of the oil and natural gas industry’s operations in Oklahoma is $23.2 billion, but the total contribution – including indirect and induced economic effects – is more than $39 billion.

Reuters never mentioned the state revenue generated from non-production taxes. By focusing only on production tax rates for horizontal and vertical wells, Reuters left readers with the impression that there are no other taxes to consider when comparing the two well types, or even the industry’s contribution to state coffers.

If Reuters wanted to blame the oil and natural gas industry for the state’s budget woes, it’s easy to see why it would not mention those other taxes. In Fiscal Year 2012, according to data from the Oklahoma Tax Commission, the U.S. Census Bureau, and other agencies, the oil and natural gas industry in Oklahoma paid more than $1.9 billion in total taxes, or roughly $600 million more than the current projected state budget shortfall.

In Oklahoma, the oil and natural gas industry is actually the largest single source of state tax revenue, accounting for more than one out of every five tax dollars generated.

From 2008 to 2014, the net severance tax revenue from oil and natural gas production was more than 12 times larger than what the Oklahoma Policy Institute estimated was “lost” due to the state’s tax system. As the following graphic from the Oklahoma State Chamber of Commerce illustrates, in a 10-year period between 2004 and 2013, the state’s oil and gas producers made total gross severance tax payments of nearly $1 billion annually. 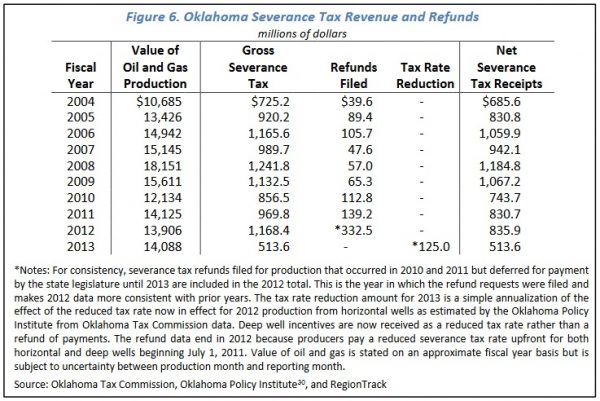 Reuters points out that Texas and North Dakota saw a sharp rise in oil-and-gas production tax revenue during the shale boom when compared to Oklahoma, but fails to mention that the biggest reason for that is the fact that Texas and North Dakota are far bigger producers than the Sooner State. Texas has produced 7.6 times more oil and four times more natural gas than Oklahoma since 2008, while North Dakota has produced 2.35 times as much oil as Oklahoma since 2008, according to the Energy Information Administration. 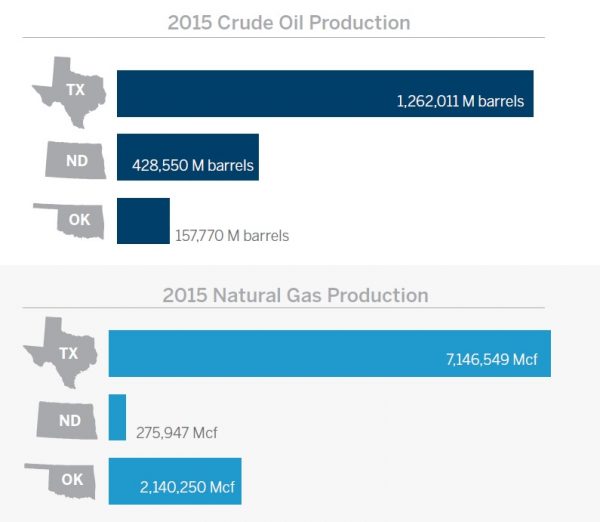 Companies drilling on public lands also generate revenue for the state and local governments, with a large portion of the funds going directly to public schools. There are currently 7,000 active oil and natural gas leases managed by the Oklahoma Commissioners of the Land Office, and since 2007, lease sales have generated more than $314 million in bonus money for the state. Revenue from royalties accounts for an additional $50 million per year.

In 2011, oil and natural gas leases on state lands generated a record amount of revenue for Oklahoma’s schools. Between 2011 and 2014, the Land Office’s trust fund – supported largely by oil and natural gas revenues – grew from $1.6 billion to $2.3 billion. The trust distributed more than $128 million to schools last year alone.

Conclusion: Oklahoma has a spending problem, not a revenue problem

Over the past decade, Oklahoma’s total state government spending has hit all-time highs each year, without fail, even through two recessions. Oklahoma’s total state tax collections have also hit record highs each of the last two years and are on pace to do so again this year. During this time, Oklahoma’s gross production tax rate on horizontal and deep wells remained effectively at 1 percent, and private Oklahoma energy drillers created tens of thousands of high-paying jobs for breadwinners in Oklahoma families across the state.

Blaming the largest source of tax revenue in Oklahoma for a state spending problem, as Reuters manages to do, defies economics and common sense.

**NOTE: This report can be downloaded by clicking here.