Revisiting a Stanford Study on GHG Emissions from Aging Oilfields

Stanford University released a study this week that finds oilfield greenhouse gas emission intensity from “each phase of the oil production process – extraction, refinement and transportation” increase “in some cases over tenfold” over a 25-year timeframe, because more energy is required to extract crude as oilfields age. The study didn’t garner much media coverage, but a write-up in E&E News headlined “Emissions surge as production areas age — study” framed the report’s findings as a “ticking time bomb” that the study’s data simply do not support.

Here are the reasons why.

E&E News reported that the study finds, “As oil fields age, drawing crude from the ground demands more energy and is worse for the climate — often dramatically so,” and that the amount of greenhouse gases emitted from the oil harvested climbs “in some cases over tenfold.” 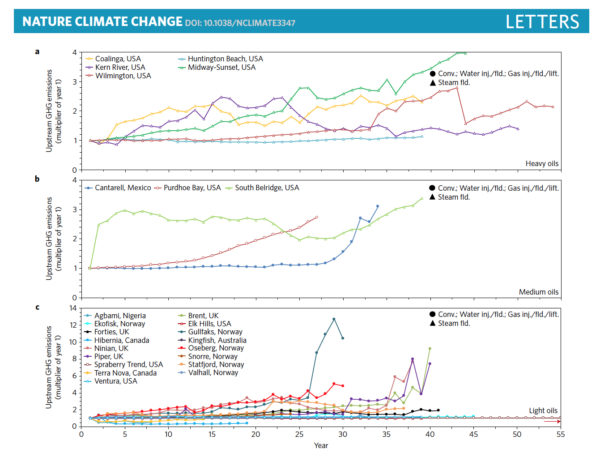 To compound this confusion, the study uses the term “unconventional” to describe the oilfields where these increased GHG intensities are the most dramatic. The term “unconventional,” of course, is widely used to refer to oil and gas extraction using horizontal drilling and hydraulic fracturing.

The study finds the biggest GHG increases occurred at Gullfaks, a Norwegian field that saw emissions jump by about 13 times, followed by three British fields – the Brent, Ninian and Piper oil fields in the North Sea, off the Scottish coast. None are shale oilfields.

Another problem worth highlighting is less about the study itself, and more about the way it was covered.

“Most of the attention paid to greenhouse gases from the oil industry focuses on the carbon emissions connected to the transportation sectors — so-called well-to-wheels emissions.

“The authors argue that while those emissions are important, the gases released due to oil and gas extraction are often significant, too, especially for unconventional projects.”

In fact, the term “wells to wheels” includes production emissions, which of course are included in the U.S. Environmental Protection Agency’s Greenhouse Gas Inventory, and are therefore not a “blind spot” as the reporter claims.

The latest EPA Greenhouse Gas Inventory shows that 80 percent of “wells to wheels” GHG emissions come from the transportation sector.

So although the researchers’ emphasis that GHG emissions from oil and gas production are “often significant,” a vast majority come from the transportation sector, and total GHG emissions certainly do not double over a 25-year timeframe as the E&E story suggests.

The authors of this study believe that their primary conclusion – that GHG intensities can increase significantly as oilfields age – should prompt policymakers to “[a]ccount for these factors so that investors, policymakers, industry, and other stakeholders can adequate compare crudes and assess their climate consequences both before development decisions are made.”

But policymakers should also take into account that GHG intensity does not necessarily translate to increased emissions.

In other words, although older marginal wells may have higher GHG intensities than newer wells, their actual emissions are likely lower. And considering fracking is now responsible for more than half of U.S. oil production, it can’t be stated enough that this study’s findings do not apply to shale oil wells, which have lower GHG intensities than the older oilfields studied, based on one of the lead researchers’ previous papers.