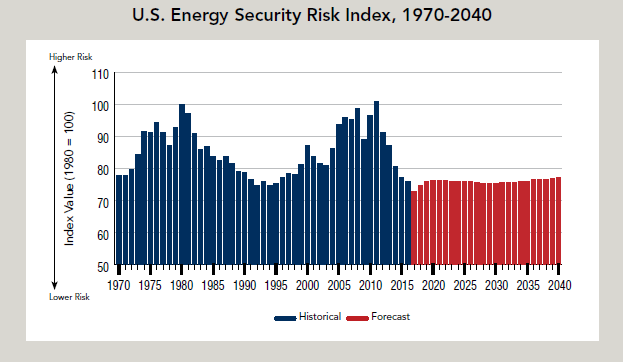 Risk to American energy security declined for a fifth straight year in 2016, a recent report from the U.S. Chamber of Commerce’s Global Energy Institute concludes. By analyzing vulnerabilities in the global energy market, the report finds U.S. energy security risk declined to its lowest level in over 20 years as increasing oil and gas production, declining U.S. imports and significant reductions in power sector carbon dioxide emissions from natural gas and renewables have all bolstered U.S. energy security.

The Global Energy Institute’s report examined 37 metrics to determine possible risk factors to U.S. energy security across four main categories: geopolitical, economic, reliability and environmental. Of these 37 metrics, the United States experienced a decrease in risk of one percent or more in 18 metrics, while experiencing “essentially no change” in 10 of them, and an increase in nine metrics. Unsurprisingly, many of the areas that experienced improvements were as a result of increased oil and natural gas production, as well as increased natural gas use and exports. As the report states:

“Although decreasing risks were seen across about half of the energy security measures, most of the risk decrease in 2016 can be attributed to a half dozen oil and natural gas related measures that declined by very large amounts (±10% or more). Risk measures associated with imports of oil and natural gas and energy expenditures were the biggest drivers of the 1.2-point drop in overall energy security risks in 2016…The oil and natural gas metrics related to greater domestic production from shale resources, and their impacts on other metrics related to imports and expenditures, have been improving over the past several years and suggest a durable trend toward lower risk.”

Further, as shale development has unleashed record levels of natural gas production, the group forecasts the risks associated with natural gas imports plummeting in just a couple years. According to the report:

“Because of domestic natural gas production that continues to roar ahead, risks associated with the Security of U.S. Natural Gas Imports continues to decline and will probably hit “0” by 2018.”

In addition to reducing dependence on foreign energy imports, the growth in domestic oil and natural production also pushed the 2016 risk associated with retail electricity price to its lowest level since 2005. Abundant natural gas resources have been a boon for energy intensive industries, such as manufacturing, and homeowners alike, by lowering fuel costs for power generation. Importantly too, the report also mentions the need for expanded natural gas pipeline infrastructure in the Northeast – an issue that has only increased since 2016, as production from the Appalachian Basin has soared. The report notes:

“Twenty-seven states showed declines in their 2016 average retail electricity prices. Declines in perennial high-cost states such as California, New York, and many in New England occurred despite policies that put upward pressure on prices. Northeast states could further moderate their high prices if they expanded their currently limited pipeline infrastructure to take advantage of the natural gas being produced in Ohio and Pennsylvania.”

The report also finds that greater use of natural gas for power generation also positively impacted U.S. energy security by significantly aiding decarbonization efforts. According to the report:

“As more natural gas and renewables have entered the generation mix, carbon dioxide emissions from the electric power sector have fallen sharply. As of 2016, U.S. power sector emissions have declined 595 million metric tons from 2005 levels, far more than any other sector in the U.S. and any other country in the world.”

The full list of metrics playing a major role in declining U.S. energy security risk is outlined in the table below: