A new report by the Rocky Mountain Institute (RMI) suggests that Illinois can use clean electricity in households while cutting emissions by replacing gas-fired heat pumps with electric ones. Yet, the RMI report takes several “artistic licenses” in its methodology, which results in a flawed and misleading analysis that, unsurprisingly, oversells electric heat pumps as a perfect solution.

RMI’s shortsighted vision on how the energy transition should be accomplished overlooks a more pressing issue: the burden it would place on American families. This is not the first time that the group publishes a tone-deaf report on how electrification would affect low-income communities. In fact, the “electrify everything” narrative has become a staple of the fringe, anti-fossil fuels group.

Here are some of the key misconceptions RMI’s report portrays:

The report’s most glaring omission is the failure to factor in the economic impacts that switching to electric pumps would represent to consumers. For example, a study by the Gas Technology Institute (GTI) concluded that energy costs increased when switching from natural gas appliances to all-electric. The increase was 45 percent in California and a whopping 90 percent in New York.

In the case of Illinois, the RMI report acknowledges that “an electrified home uses 8,333 more kWh annually than a gas (or propane) home”. This is a significant change considering the costs of energy for the residential sector. According to 2020 data from the U.S. Department of Energy, natural gas is $28 cheaper per million British thermal units (Btu) than electricity. Switching to electric heat pumps would clearly have an impact on households, compounding the energy burden experienced by low-income communities.

Eighty-nine percent of low income households in Chicago have reported experiencing energy insecurity during 2019. Adopting an “electrify everything” policy would only add an extra burden to the already stressed energy poverty situation in the state.

Another key issue that RMI fails to mention are the requirements and costs associated with an electrify everything policy. Renewable energy sources have already added significant pressure to the existing distribution systems due to the intermittence of renewable power, which stresses the grid’s capacity to the point of failure.

According to the American Society for Civil Engineers, modernizing the US grid to accommodate additional renewable sources “will lead to funding gaps of $42 billion for transmission and $94 billion for distribution by 2025.” In short, electrifying all households’ appliances would require more electricity, adding extra stress to the grid.

Ultimately, and something the report fails to consider, many of the grid modernization costs will fall onto the consumers’ energy bills. This is unsustainable for low-income families, especially in areas disproportionately affected by high energy burdens, like in Illinois who already pay “13 percent of their monthly incomes for utilities, while upper-income families pay only 2-3 percent.”

The report fails to consider other pathways to reduce households’ emissions

As a diehard “electrify everything” group, RMI’s report also fails to show that there are alternative sources and technologies to reduce emissions for the residential sector. Natural gas energy efficient products and devices have showed promising results both in offering lower costs to consumers while reducing emissions. 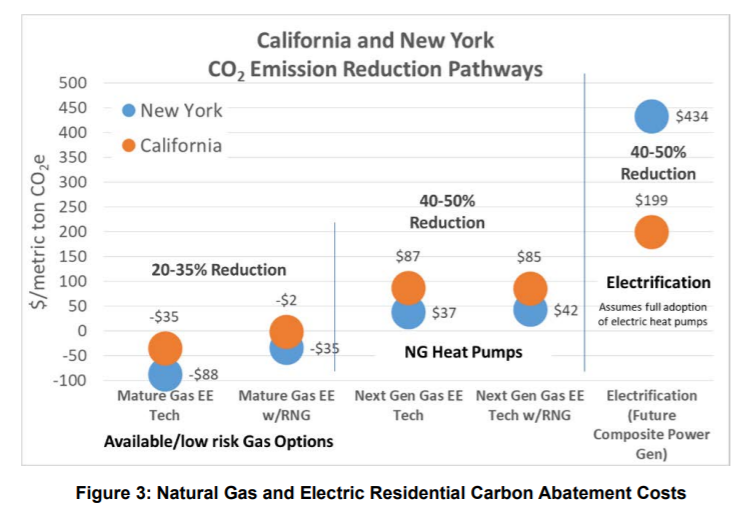 When advocating for a technology or energy source that could help reduce emissions, it is necessary to consider all the variables involved, particularly direct and associated costs for consumers. RMI omits this key argument in its report, failing to factor the existing energy burdens affecting, in particular, low-income and vulnerable communities. Instead of having a short-sighted focus, RMI should work on an approach that integrates as many different clean technologies as possible – while keeping energy affordable – to achieve the shared goal of combatting climate change.