A geophysicist with EnerVest uses U.S. Geological Survey data to show how earthquakes near Azle, Tex., were far deeper than scientists had theorized.

A recent report led by researchers at Southern Methodist University (SMU) examined seismic activity in the Azle region of North Texas, linking small tremors from 2013 to 2014 to nearby wastewater injection activities (not fracking). But new questions about the study, which included co-authors from the U.S. Geological Survey and the University of Texas at Austin, emerged during a technical hearing last week in Austin, most notably from a set of data showing that the earthquakes began much deeper than the research team had thought. The findings suggest that the Azle-area earthquakes could be due to factors other than oil and gas activities.

The hearing was called by Texas Railroad Commissioner Ryan Sitton a few weeks after the SMU-led study was released. Sitton, a mechanical engineer by training, invited the researchers to elaborate on their findings, as well as the Railroad Commission’s chief seismologist (Dr. Craig Pearson) and chief geologist (Leslie Savage). Also invited was Dr. Daniel Hill, who heads the petroleum engineering department at Texas A&M University. Based on the information presented at the hearing, Dr. Hill questioned whether the SMU report had enough evidence to link the Azle earthquakes to nearby disposal wells, according to the Fort Worth Star-Telegram.

But it was a presentation from a geophysicist at EnerVest, a Texas-based energy company, that exposed a potentially major flaw in the Azle study. The new analysis showed that the depth of the first seismic sequence near Azle began at or even deeper than 20,000 feet below the surface. The events identified by SMU’s monitors began in the Ellenburger formation, which is located only about 8,000 feet deep. Energy companies have long used the Ellenburger as a location for wastewater disposal, owing to its depth and high permeability.

The finding that the early, larger earthquakes were extremely deep came from analyzing publicly available data from the U.S. Geological Survey’s WMOK seismic monitoring station in southern Oklahoma. The WMOK station recorded the full earthquake sequence around Azle, which began several weeks before SMU researchers deployed local seismic monitors in mid-December 2013. The largest recorded earthquake in the area was a magnitude 3.6, which occurred on December 8, 2013, or several days before SMU’s local monitoring network was in place. 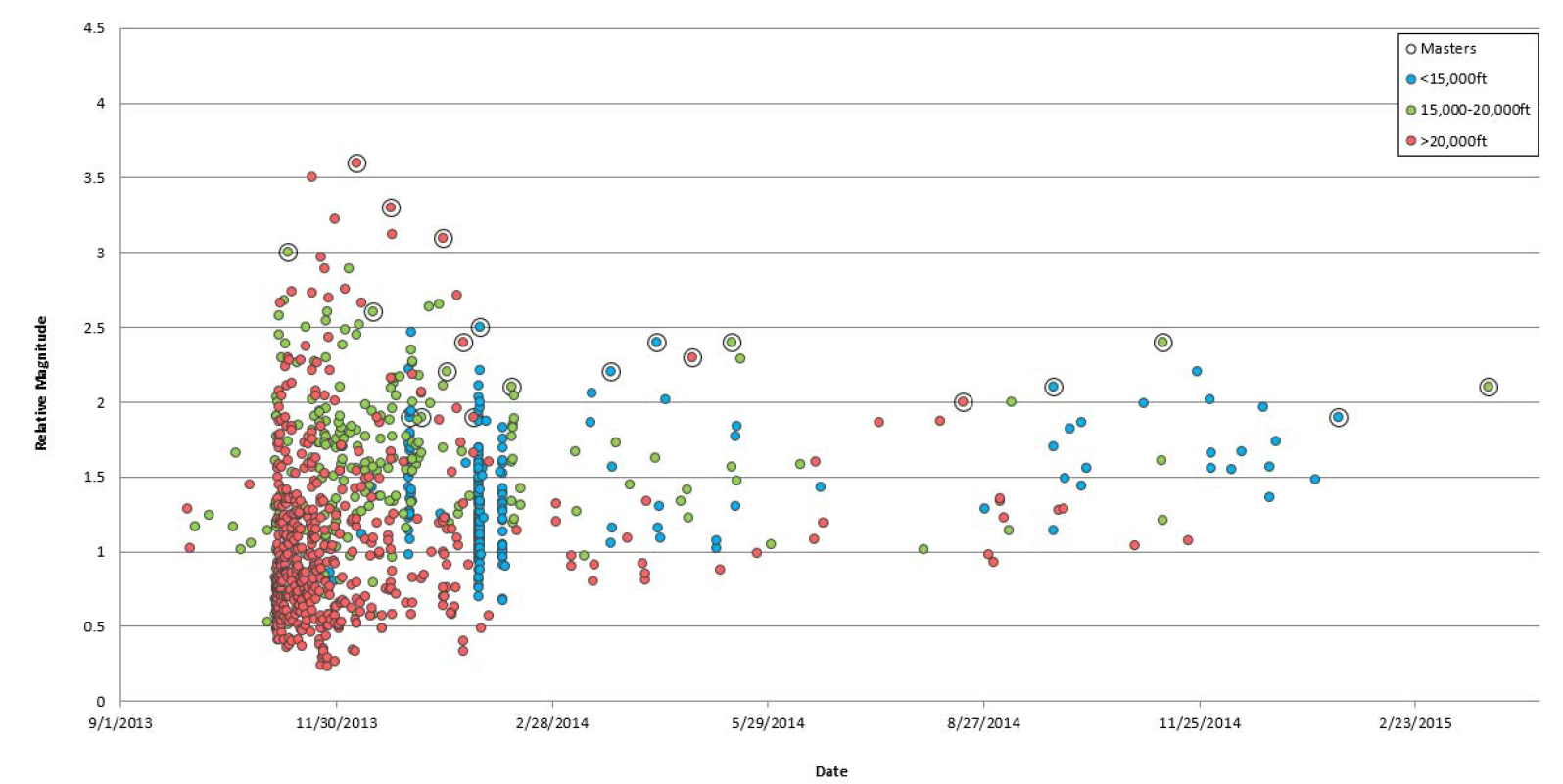 Timing and depth of the seismic events near the town of Azle, Tex., based on data from a U.S. Geological Survey monitoring station in Oklahoma. SOURCE: EnerVest

Indeed, as the SMU-led team acknowledged in its report, it could not pinpoint the depth of the initial seismic events:

“The absolute focal depth of several of the initial large NEIC catalogue events remains unknown, but the larger magnitude earthquakes recorded by the temporary network occur in the underlying basement along the primary fault…” (emphasis added)

But data from the U.S. Geological Survey’s WMOK station show that the large December 8th event – located more than two miles below the Ellenburger – was “highly correlated” with subsequent deep earthquakes identified by SMU’s local network, based on waveforms. This means the earthquakes that likely began in the deep basement rock (20,000+ feet deep) spurred additional events along the fault, including the smaller, shallower events in the Ellenburger.

Scientists used cross-correlation and waveform analysis to show that the early, large earthquakes in Azle were far deeper than where wastewater injection activities were occurring. SOURCE: EnerVest

This appears to contradict a key part of the SMU-led team’s hypothesis, which was that the events began closer to where fluid injection was occurring (i.e. the Ellenburger) and then migrated down the fault into the basement rock. From the paper:

“We hypothesize that the deeper earthquakes are due to downward pressure transfer within the fault system.” (emphasis added)

Part of this discrepancy could be due to the limitations of the study team’s model, which “assesses pressure only in the Ellenburger formation where several earthquakes were recorded,” according to the authors. The researchers could only “hypothesize” about seismic events that occurred deeper than the Ellenburger — a major research gap that could now be filled by the USGS station data.

When presented with this information at the hearing last week, several authors of the study were intrigued. Heather DeShon from SMU asked the EnerVest geophysicist of the new assessment, “Are you going to be able to write it up and publish it?” Matthew Hornbach, the lead author of the report, said it would be “great” if the analysis were to be published. “You should do it,” Hornbach added.

After the SMU-led team released its findings in April, Energy In Depth identified five areas of concern, one of which was the researchers’ theory that a pressure change of between one and five pounds per square inch (psi) caused the fault to slip. That’s an exceedingly small pressure change — a tenth of a percent, if not considerably less — in a formation with natural pressures above 5,000 psi. As the team further observed, the fault was already “critically stressed,” though the researchers noted last week that it doesn’t take much to induce seismicity in that environment. “You only need a pressure change of 1.5 PSI to trigger an earthquake on a critically-stressed fault line,” said DeShon, one of the SMU researchers.

But the data from the USGS station in Oklahoma suggest the earthquakes along that “critically stressed” fault may indeed have been natural in origin, not triggered, based on depth and timing. The fact that the early earthquakes, based on USGS data, occurred far below where the SMU-led team’s model had shown raises even more questions, not the least of which is how such a small amount of pressure — a fraction of what’s required to inflate a football — could migrate more than two miles deep into the basement rock and cause the fault to slip.

Notably, the SMU-led team did not completely rule out natural causes in its study, though the researchers suggested that was “unlikely.”

“We acknowledge that it is possible, but unlikely, that natural tectonic stress changes are responsible for recent seismicity in Azle,” according to the study. Elsewhere in the report, the researchers observed that “higher [injection] volumes and pressures are reported in prior years at both injectors, when no felt earthquakes occurred.”

Finally, as Energy In Depth noted when the paper was first released:

“While the SMU study released today appears to suffer from some modeling flaws, those issues should not overshadow the fact that the research team has provided all of us with a valuable tool for better assessing induced seismicity. Being the “first mover” in science is not easy, as science advances knowledge through trial and error. Models are proposed and subsequently improved, ultimately enhancing our understanding of certain processes. The SMU paper was released in that spirit, and hopefully the issues and concerns identified here will provide constructive feedback to improve future analyses.”

The information presented last week builds upon what the SMU-led team has collected through its seismic monitors, adding new data that provide all of us with a more comprehensive understanding of the seismic events near Azle.