Scott Perry recently came to Washington & Jefferson College (W&J) to talk about areas of improvement and successes of the industry, as well as oil and gas regulation.  The lecture brought out around 100 people and was part of the continuing Energy Lecture Series.

One of the key presenters of the Energy Lecture Series at W&J was Scott Perry, Deputy Secretary of the Office of Oil and Gas Management at the Pennsylvania Department of Environmental Protection (DEP).  Perry oversees the development of departmental policy as well as regulatory and technical guidance on oil and gas activities in Pennsylvania.  With more than 10 years experience with the DEP, Perry was a great addition for the Energy Lecture Series.

Here’s some of what Perry offered:

“A clean and healthy environment is just as important to our quality of life as the jobs and economic development that activities like shale gas development can bring.  So, how can I be so confident in this?  Well, doesn’t the not to distant history of Southwestern Pennsylvania prove me to be correct?  We have a society here that has made decisions that clean air and water are maybe even more valuable and should not be disregarded in the face of pure economic development?  I think the answer to that question is yes.  But you know what, I am also an energy consumer and sometimes I am an over consumer.  If you’ll allow me to confess I actually have two refrigerators in my house, so I feel in a way I need to be a bit pragmatic about some of these matters of domestic energy production.  Because, what I also know is that domestic oil and natural gas development produce products that form the basis of modern society.”  – Scott Perry (02:00) 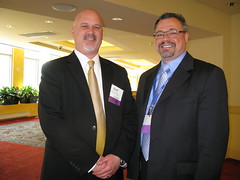 On the left, Scott Perry

The first topic Perry covered in his presentation was potential failures on the natural gas industry’s part, which have now turned into great successes.  We have been saying for a long time that no industry is perfect and accidents do happen, but by learning from mistakes and accidents we have the ability to ensure the right regulations and procedures are in place to mitigate these risks. Perry said there were, in 2010, some 5,000 inspections of about 1,600 wells, which generated 1,300 violations.  While this was less than one per well on average, it also indicates there was room for improvement, and the industry met the challenge head on and continues to improve. As Perry notes:

“We engaged in rigorous enforcement, laws were changed to improve the regulatory environment in Pennsylvania and I will also tip my hat to the operators for imploring better practices than used elsewhere in the country and probably the world.  So that today about the same number of wells have been developed, a little over 1,360, more than twice the inspections, half the violations in that time period.  That is a successful trend. Is it the goal? Have we reached our journey? Absolutely not.  But I believe we are on a path of development practices that are sustainable for the communities and will ultimately yield net benefits for us all.” (05:50)

There has never been any industry that got things precisely right on the first go around (check out some of Cris Pasto’s posts on renewables, if you believe that’s the case), but with the DEP and similar agencies in other states doing a more than competent job at monitoring and working with the industry, it’s only a matter of time before the process and operations here in Pennsylvania and America are modeled throughout the rest of the world.  Everyone is learning from us.

Perry then discussed the waste water generated from developing a shale gas well, which is another success story.  Perry said 71 percent of the waste water produced after well stimulation is being reused at another site, with half the remaining 29 percent being taken to waste water treatment facilities where it is treated and reused later.  The other half is taken to disposal wells.  Here’s what Perry had to say about disposal wells specifically:

“The next best place to take waste water besides a treatment facility is in fact a waste disposal well. Again all the dissolved solids that once came from the formation should be put back into the formations from whence they came.” (13:05)

Perry also talked about Acts 9 and 13, highlighting the positive features they have brought to the shale gas development process.  I found it interesting to hear Perry’s views on Act 13, as it is a topic of constant discussion in the state, and his perspective was very positive.

“Act 13 is the greatest revision to the oil and gas laws in a generation.  What we have done since Act 13 was passed is proposing new regulations.  For the first time Act 13 gives the department the power to condition well permits to avoid or minimize potential impacts on public resources.  Operators are also now required to identify any abandoned wells within 1,000ft around the vertical part of the well, as well as the horizontal portion and monitor it for any communication during hydraulic fracturing.” (22:45)

Act 13 also delivered the goods when it came to waste management and spill prevention, according to Perry.  Well pads are now required to be lined completely with primary as well as secondary containment.  This means even if a truck comes on site with waste materials, in any form, it must be parked on containment.

The last part of Perry’s presentation was a Q&A session.  The topic of impoundments has been a hot topic in the news lately so it was no surprise a question was asked regarding this issue.  What was more interesting was that the question was asked by Nick Gerek, Communications Director for Jesse White.

“You referenced here that managing waste water is the most significant challenge the industry faces.  You also mentioned that the waste water is naturally radioactive.  In light of that, are open waste water  impoundments an industry best practice? I ask this especially because of the fact that most companies don’t use waste water impoundments, they use a closed loop system.” – Nick Gerek (41:44)

I’m going to venture to guess Gerek was there on Rep. White’s behalf to ask about waste water impoundments.  Perry explained that the closed loop systems to which Gerek referred actually have nothing to do with waste water impoundments.  Closed loop systems actually deal with how a well is developed and the reuse of drilling mud.  After correcting that part of Gerek’s question, Perry went on to explain industry best management practices for using double lined impoundments at the pits and well sites.  Addressing the radioactivity in waste water, Perry stated that the DEP has done analyses of the radioactivity in flowback and found that there is no exposure issue for anyone around the fluid — workers, truck drivers or anyone else.  All the naturally occurring radioactive elements are retained within the actual fluid.  (42:21)

I believe everyone in attendance of Perry’s lecture found it rewarding.  As a resident of Southwestern Pennsylvania, it’s always good to see the inner workings and the people behind the DEP regulatory process.