“Located in the northern lower peninsula of Michigan, the Au Sable is known for its high water quality, scenery, recreational opportunities, cold-water fishery, and historic and cultural significance. It may just be the finest brown trout fly-fishing east of the Rockies.”

That line appears as a description of the Au Sable River on the website for the National Wild and Scenic Rivers System, speaking to the condition of this river that drains much of Michigan’s Antrim Shale region.  The Michigan Department of Environmental Quality notes “since the 1960s, more than 12,000 wells have been hydraulically fractured [in the state]. Most of these are Antrim Shale Formation gas wells in the northern Lower Peninsula.”

This relationship is no accident.  Open spaces are only preserved when landowners, including the state itself, are able to generate economic rent to pay the holding costs associated with that land.  Natural gas development from the Antrim Shale, made possible by hydraulic fracturing, allows landowners to keep land as open space because of the income generated from activities occurring primarily beneath the surface; beneath the open space.  The alternative is more development on the surface, with all the associated added impacts.  The Antrim Shale experience demonstrates, perhaps better than any other, the positive impact that the partnership between the natural gas industry and landowners has on water quality.

Antrim Shale natural gas production is found in the northern-third of the Lower Peninsula, primarily in Antrim, Kalkaska, Crawford, Oscoda, Otsego and Montmorency Counties.  Major parts of the last four are located within the Au Sable River watershed, depicted below. 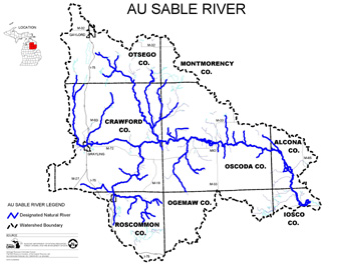 The Au Sable River is designated as a “blue ribbon fishery.”  Yet, it’s also been the location of incredible amounts of natural gas development over a period of decades, including the headwaters of the Au Sable River.  A full-scale version of map for the entire county (which may be expanded for better readability) may be found here.

In the map below, each large square is a square mile (640 acres) and each small square is a 40-acre unit.  Indeed, the entire headwaters area of the Au Sable River in Otsego County is peppered with natural gas wells, although few of the visitors to the area ever notice them.  There are an estimated 3,500-4,000 producing wells in the Au Sable River basin, according to DNR, and it is considered fully developed.

There are roughly 500-600 wells depicted on this map, or roughly 6-7 wells per square mile on average for both developed and undeveloped areas.  These vertical wells were generally developed in the late 1980s and early 1990s, before advances in horizontal drilling technology made it economic to utilize it in the Antrim Shale.

The development of the Antrim Shale began with 40 acre units (one well per 40 acres) but was increased to 80 acre units as more efficient drainage occurred due to advances in hydraulic fracturing.  The utilization of modern horizontal (lateral) drilling methods has reduced the number of wells needed to efficiently produce from a given area to one well per 640 acres, or, more accurately, a development unit size of 640 acres.

In some cases, such the State Excelsior 3-25 well in Kalkaska County, a unit size of 1,280 acres is utilized. The State Excelsior 3-25 well has an approximately 10,400-foot (nearly 2 miles long) horizontal wellbore that efficiently produces from this large unit. Essentially, the longer the horizontal portion of a well – the lateral leg – the better, as greater access to the producing formation reduces the number of wells needed to efficiently recover the oil and/or natural gas from the area. Not only that, but now numerous horizontal wells can be placed on the same well pad, even further reducing overall impacts.

The use of horizontal drilling and multi-well pads addresses the very issue opponents of Antrim development were concerned about several years ago – ‘fragmentation’ of natural habitat by well pads and their related activities!

There’s something else different about these Antrim wells, however, that’s worth mentioning.  The typical well is about 2,000 feet deep, sometimes less. The water table can be very close to the surface, extending to a depth of perhaps only 600-700 feet, meaning there is often less than 1,000 feet of rock separating the hydraulic fracturing operation and the water table.

Keep this map in mind as you consider these evaluations of the Au Sable watershed water quality (emphasis added):

“Water quality in the Au Sable River is generally good, owing primarily to the limited amount of development within the basin.”

“Groundwater quality is generally excellent throughout the watershed, although a number of localized areas have been adversely affected by past and present human activities.”

“Highly stable water flows of very high quality water may be the single most significant trait of the Au Sable River. The coarse sand-gravel composition of the watershed allows rapid infiltration of water and tends to level precipitation into a steady groundwater contribution to stream flow…In addition to a stable flow, the water quality of the Au Sable River system is very high when compared to other rivers in the state. Using the standardized Water Quality Index, the Au Sable River at its mouth is shown to average 85.9…Figure I shows this average compares very favorably with other rivers in Michigan.”

“Those involved with the development of the Au Sable Watershed Management Plan recognize the resource is of very high quality, the stakeholders are many and varied and development pressure within the watershed will continue to increase.”

“The Au Sable River is an awesome fishery. Trophy brown trout, ‘screamin’ rainbows, dainty brook trout, and acrobatic steelhead are caught in good numbers each year. Hatches are extremely prolific and will challenge those of the Delaware River in New York State. Anglers come to this river for more then just its great angling as it is also a beautiful and serene river. The Michigan woods is home to a diversity of wildlife from hawks and eagles to deer and bear.”

There are four final things worth observing here:

Opponents will claim it’s much different now, but – as usual – they’re mistaken.  The only thing “new” is the increased use of horizontal drilling, which significantly increases hydrocarbon capture efficiency and effectiveness. That, in turn, means even less surface disturbance. In fact, horizontal wells being utilized today yield 3.2 times more natural gas per unit than vertical wells, and they generate less wastewater per cubic foot of gas produced than so-called conventional wells.

That means more natural gas produced with less surface impact and less water use. A nice combination, for sure.

Horizontal drilling combined with hydraulic fracturing is safe, and the history of responsible development from the Antrim Shale here in Michigan proves it.