Shale Drove Record-Shattering U.S. Oil and Natural Gas Exports in First Half of 2018 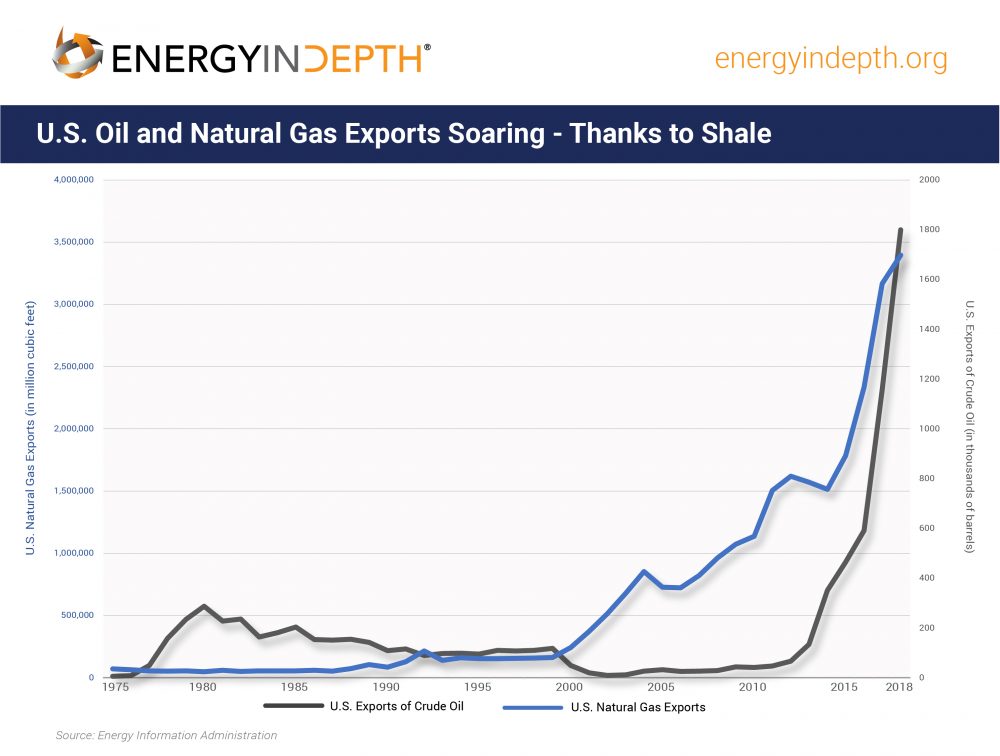 Recent U.S. Energy Information Administration (EIA) reports highlight the fact that the unprecedented surge in U.S. crude oil and natural gas production – made possible by shale development – led to record petroleum and natural gas exports in the first half of 2018.

This is a remarkable development considering it wasn’t that long ago that the United States was mired in a state of energy scarcity and unwarranted “peak oil” malaise. But as the Motley Fool’s Maxx Chatsko recently noted, “In a span of just 17 years from 2005 to 2022, the United States will go from being the world’s top energy importer to a net energy exporter” for the first time since 1953, thanks to fracking. 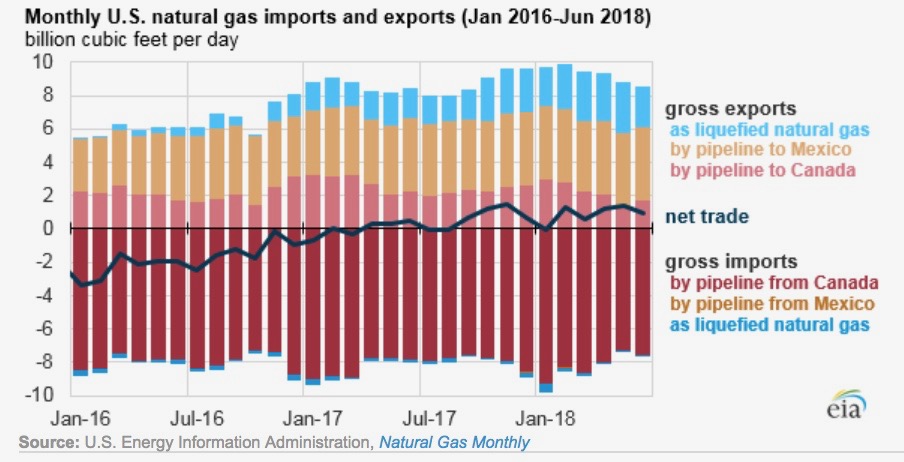 The EIA reports that:

As the following EIA chart shows, the upward trajectory of U.S. natural gas exports over the past three years has been remarkable.

Even more eye-popping is the ascent of crude oil exports over the past three years.

Notably, the latter chart doesn’t even include figures from the first half of 2018, when crude exports averaged 1.8 million barrels per day (b/d) and reached a record 2.2 million barrels b/d in June. The latter figure is double the average of 1.1 million b/d in 2017, the second full year since the crude oil export ban was lifted.

Thanks to surging tight oil production throughout the country, especially in Texas’s Permian Basin, crude exports surpassed hydrocarbon gas liquids (HGL) to become the largest U.S. petroleum export in the first half of the year. 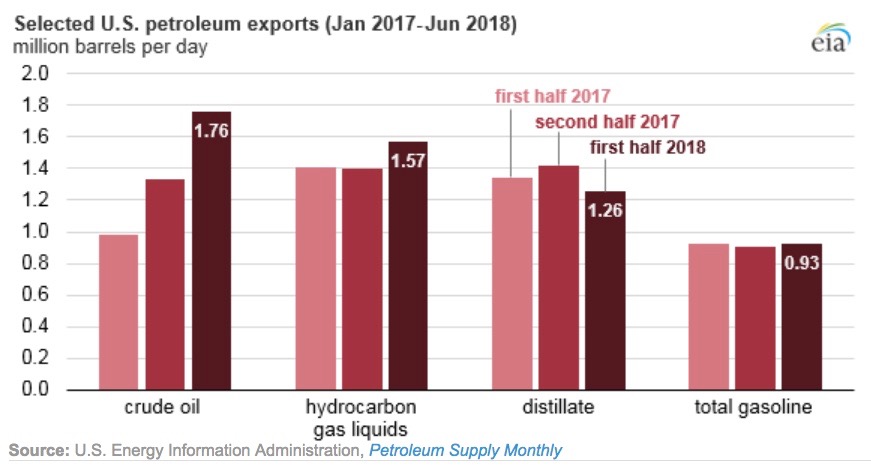 Exports of crude oil and petroleum products reached 7.3 million barrels b/d in the first half of the year, setting an all-time U.S. record for the first six months of a year. The EIA also recently reported that net petroleum exports are expected to fall to their lowest levels since 1958 in 2018, continuing the 70 percent downward trajectory since 2005 shown in the following EIA chart.

Similarly, record natural gas exports have also been driven by record production –dry natural gas production was a record 82.2 billion cubic feet per day in August and is expected to average a record 81 bcf/d this year – along with policy decisions that have allowed the United States to emerge as a major liquefied natural gas (LNG) exporter.

As the following EIA chart shows, LNG exports increased 58 percent in the first six months of 2018 compared to the first half of 2017. 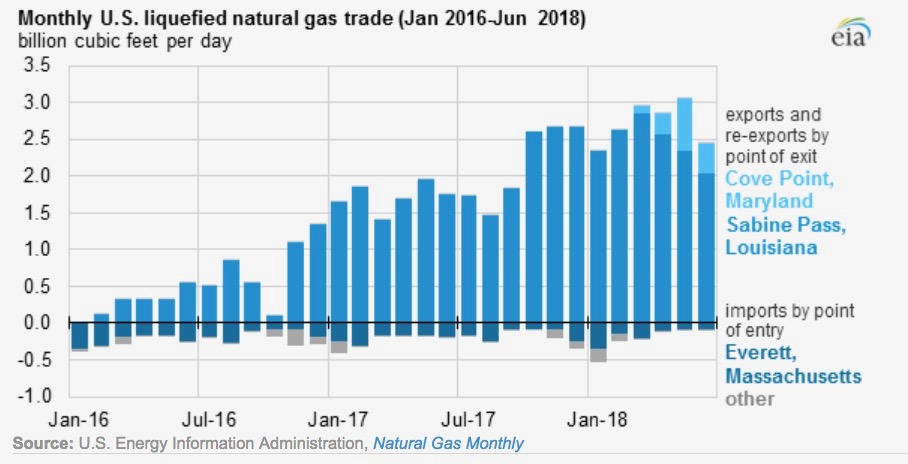 And we’re only getting started, as LNG export capacity is expected to more than triple over the next two years. 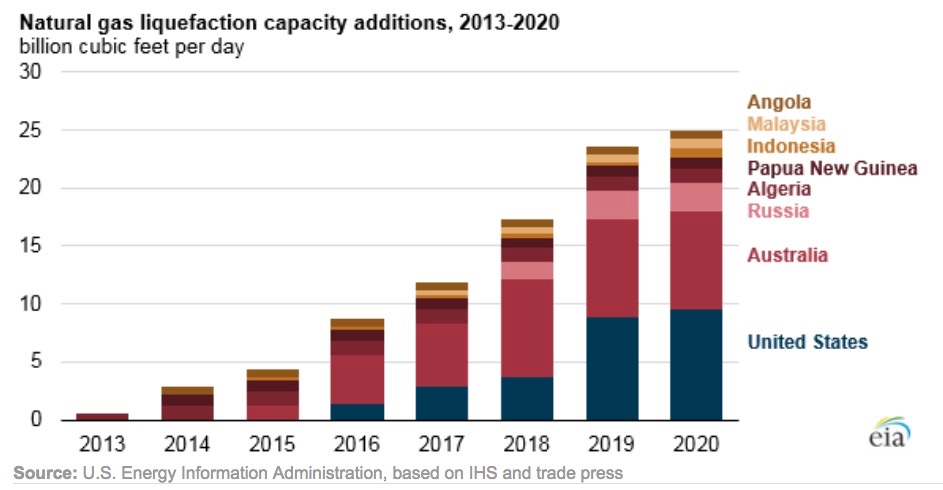 Why This Is a Good Thing

“The U.S. in theory, by the early 2020s, assuming the shales retain their resilience, could be a net oil and oil product exporter. That’s incredible, actually. That means that when there’s an oil shock – and there will be in the next few years – the U.S. economy as a whole may benefit from that rather than suffer from it, as it has historically.”

And should the United States become a net energy exporter by 2022 – as many analysts and the EIA has predicted – it would wipe out an energy trade deficit that peaked at $321 billion in 2011. Our net trade deficit for petroleum products has already dropped by almost $325 billion – 84 percent – since 2008 and is expected to continue to plummet.

The distinct possibility of becoming a net natural gas and petroleum exporter was foreshadowed earlier this summer when the Houston-Galveston port district became a net exporter of crude oil for the first time ever. That port district accounts for more than 70 percent of the 2 million b/d the United States exported in May 2018. In other words – the reality of the United States becoming a net energy exporter is far closer than some might think. We have the ongoing shale revolution to thank for it, and as U.S. Rep. Peter Olson (R-Texas) recently told EID, lawmakers will play an important role in further enhancing our energy security moving forward,

“The incredible progress we have made is driven primarily by the private sector’s innovation, but my colleagues and I are working to reduce the needless barriers thrown up by Washington. We repealed the ban on crude exports and we’re working hard to keep FERC’s foot on the gas pedal as they review gas export terminals. When we sell energy abroad, we’re not only helping our economy at home, but we’re also improving our national security by supplying allies and undercutting OPEC and Russia. Energy exports are a win-win for all Americans, whether they work in the oil patch or live far from it.”