The shale revolution has yielded yet another once unimaginable energy achievement.

The driving force behind such an unprecedented record? Hydraulic fracturing and horizontal drilling, plain and simple.

Thanks to continuously evolving technologies, the U.S. shale revolution that took flight in 2008 has transformed the energy market and, as a result, oil production has literally doubled since 2010, as the above EIA chart shows.

Coupled with recent efficiency improvements in shale fields like the Permian Basin, companies are producing more oil and gas for less money, consistently surpassing expectations throughout the country.

While the Permian Basin has been established as the primary engine of U.S. oil production growth and is home to more than 40 percent of all active U.S. drilling rigs, that prolific Texas basin isn’t the only one experiencing growth. There is plenty prosperity to go around, as all major U.S. “tight oil” plays – from Eagle Ford to the Bakken – have seen an increase in production this year.

As the EIA’s latest Drilling Productivity Report shows, oil production increased in each of the United States’ five major “tight oil” plays in July. And that uphill progress is only expected to continue, as shale output is projected to reach a record 7.47 mbpd in August. 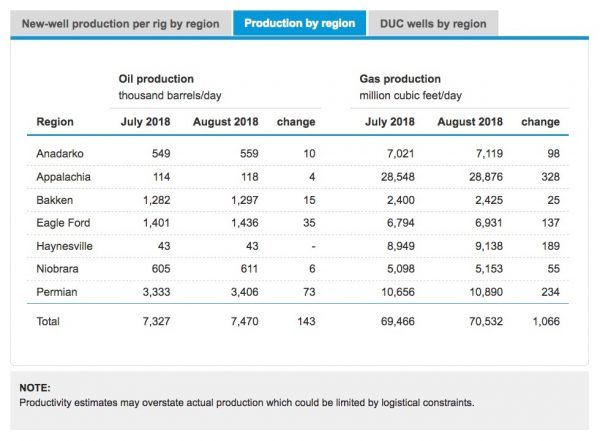 With America in the prime of its oil renaissance and production at an all-time high, it is no surprise that the EIA is forecasting a new record of 12 million barrels a day by 2019, putting us on pace to surpass Russia as the top crude oil producer in the world and make history once again. As the latest EIA production forecast chart shows, tight oil production is expected to account for a vast majority of the increased production forecasted for 2019. 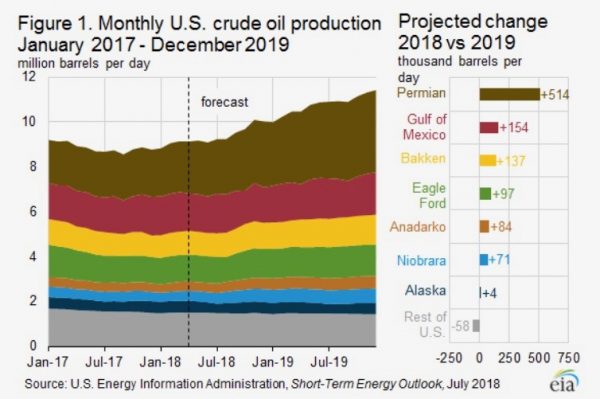 Not only is shale technology resulting in record production, it has brought forth a surplus of job opportunities, increased state revenue for public services and a host of other benefits.

Shale development just seems to be the gift that keeps on giving.