Spreading mis- and disinformation about oil and gas development and using vituperative, near-slanderous rhetoric to attack the industry have become hallmarks of the campaign to ban hydraulic fracturing.  But this week, the leaders of this fringe following reached arguably a new low: attacking an oilfield services and technology provider for donating money to a cancer-research charity.

In an op-ed penned for the anti-fracking website EcoWatch, Americans Against Fracking “science advisor” Sandra Steingraber accused Susan G. Komen – one of the most prominent organizations dedicated to raising awareness of and ultimately curing breast cancer – of “pinkwashing” hydraulic fracturing. Steingraber said Komen had teamed with Baker Hughes to create a “pink, fracking, drill head,” before launching into a tirade about how “cancer hazards are present at every stage of the drilling, fracking, processing, and distribution process.” The op-ed included this photo: 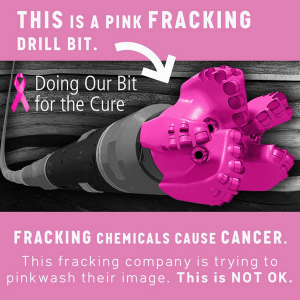 First of all, it’s notable that this “science advisor” demonstrates a fundamental misunderstanding of the very industry that she hates. As Nick Sakelaris with the Dallas Business Journal pointed out:

“Astute readers will note that drill bits are used for drilling conventional and unconventional wells. They are not used in hydraulic fracking, a well completion process done after the well is drilled.”

So, right off the bat, we see the rank dishonesty at work in this latest stunt. In her desperate rush to malign fracking, Steingraber is apparently unaware that drilling and hydraulic fracturing are separate processes.

But let’s set that aside for a moment. The real problem with Steingraber’s screed is actually much bigger, because the crux of her argument – that hydraulic fracturing supposedly causes cancer – has been definitively debunked time and time again. And lest you think this was just an isolated case of hyper-activism, the Sierra Club, FrackAction, Bill McKibben, Mark Ruffalo, and many other leaders of the anti-fracking movement cheerfully parroted Steingraber’s message.

As we know, discredited Gasland star Josh Fox has peddled that same claim for years, and used it with such reckless abandon that the Associated Press felt compelled to conduct a fact-check. The experts interviewed by AP disavowed any such link:

Opponents of fracking say breast cancer rates have spiked exactly where intensive drilling is taking place — and nowhere else in the state [of Texas]. The claim is used in a letter that was sent to New York’s Gov. Andrew Cuomo by environmental groups and by Josh Fox, the Oscar-nominated director of “Gasland,” a film that criticizes the industry. Fox, who lives in Brooklyn, has a new short film called “The Sky is Pink.”

But researchers haven’t seen a spike in breast cancer rates in the area, said Simon Craddock Lee, a professor of medical anthropology at the University of Texas Southwestern Medical Center in Dallas.

David Risser, an epidemiologist with the Texas Cancer Registry, said in an email that researchers checked state health data and found no evidence of an increase in the counties where the spike supposedly occurred.

That same AP story, from 2012, also included comments from Komen’s vice president of research, Chandini Portteus. Asked if her organization sees any evidence of an increase in breast cancer cases in those counties with the greatest numbers of wells being drilled and fractured in the Barnett region of north Texas, Portteus replied: “We don’t.”

In another article penned this week, David Sirota of the International Business Times (who has previously written a few of his own screeds against oil and gas) included comments from a spokesperson for Komen, who reiterated that “the evidence to this point does not establish a connection between fracking and breast cancer.”

The Texas Department of State Health Services also recently released its findings from a third investigation of cancer claims in Flower Mound, a town in north Texas in proximity to significant Barnett development. DSHS said its results were “consistent with previous DSHS investigations,” which found no evidence of a cancer cluster. Not surprisingly, none of these studies earned a mention in the Steingraber blog post. Equally unsurprising, but much more unfortunate: none of them were mentioned in any of the resulting, uncritical press coverage that she was able to spin-out from it.

Of course, for the “ban fracking” crowd, securing good press coverage is always the goal, no matter the depths to which they need to plunge to attract it. Here, we have an example of the kind of campaign that most reasonable, levelheaded observers would say is pretty shameful. Not just for trying to bully a respected organization like Susan G. Komen. But for having such intense hatred of an industry that it apparently thinks it’s OK to attack a company within that industry for helping support breast cancer research – based purely on the fact that the company helps develop oil and natural gas. Seriously?

Most people have a family member or know someone personally who has dealt with cancer. It’s an incredibly emotional experience that too often ends in tragedy. Regardless of one’s political ambitions or personal ideologies, all of us should be able to recognize that curing cancer is a noble and worthwhile goal, and one that should be supported with a unified front.

Except, apparently, the anti-fracking movement.