Attendees at this week’s Shale Insight conference had the opportunity to receive updates on a project that has been years in the making in the Appalachian Basin – the planned Shell Appalachia ethane cracker facility in Beaver County, Pa. EID first reported on Shell’s decision to locate the facility in Pennsylvania back in 2012, and the planning process will finally come to fruition later this year when the main construction of the facility begins, creating thousands of jobs in the region. 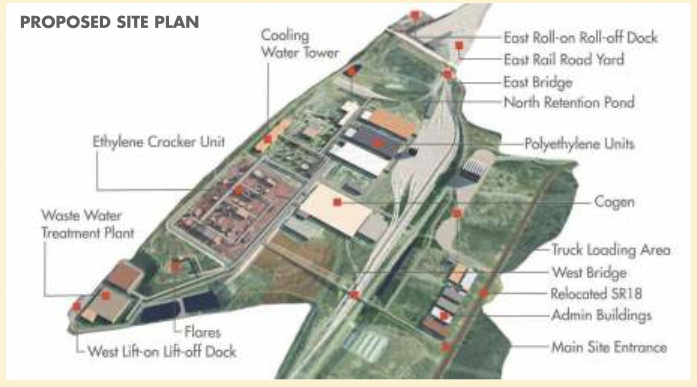 This facility will be the very first of its kind built outside of the Gulf of Mexico in the last two decades, and is one of two ethane crackers announced in the region. It will use state-of-the-art technology, including continuous air monitoring at locations around the facility.

Some construction – installing utility lines and removing dirt from the site – has already taken place. When the main construction of the facility begins at the end of 2017, it is expected to create 6,000 new jobs and have a $4 billion economic impact.

As Shell Chemicals Project Director Anca Rusu told attendees at the Northeast U.S. Petrochemical Construction Conference in June, the facility’s economic impacts in the region “will change forever Pittsburgh and the landscape.”

In fact, it’s already starting to. Back in August, the Tribune Review reported that “Beaver County’s Shell cracker plant project boosts demand for local welders.” In anticipation of this need, Steamfitters Local 449 announced it was holding an open house to inform the community of the upcoming employment opportunities and its tuition-free, 17-week apprentice training program for welders.

“We will be putting hundreds of skilled tradespeople to work in good jobs with competitive pay and benefits and we will make sure they have the training and support they need to succeed in our profession.”

In addition to the jobs created during construction, Shell anticipates 600 full-time permanent positions will be needed once the facility is operational. Todd Whittemore, global tech manager Shell Global Solutions, told Shale Insight conference attendees that “three to four times that number of jobs is expected to be created outside in the form of manufacturing, transportation, support, etc.”

That’s not surprising when one considers the facility will produce 1.6 million tonnes of polyethylene per year. That anticipated production, coupled with an abundance of natural gas in the Marcellus and Utica shales, is helping to turn the Appalachia Basin into a hotspot for plastics manufacturing and natural gas liquids (NGLs) storage.

This expanded economic impact beyond just upstream oil and gas development was of particular interest at Shale Insight, as the following Business Journal Daily segment shows.

All told, it is an exciting time in Pennsylvania and the Appalachian Basin as the abundance of natural gas from the Marcellus and Utica are driving investment, spurring new manufacturing opportunities, and bringing back industries like steel manufacturing that the region had long written-off.