A new report from Reuters details how a Pennsylvania-based organization behind a statewide campaign targeting Colorado’s oil and gas industry is threatening local communities with bankruptcy.

That organization, the Community Environmental Legal Defense Fund (CELDF), is an anti-fracking group that recently initiated campaigns for their Community Rights Amendment across the state of Ohio and is targeting Colorado’s statewide ballot in 2016.

But CELDF has indicated that the organization cares little for what happens in the wake of those elections. Often challenged in court, as was the case in Lafayette, CO, their efforts have a history of leaving communities holding the tab for high legal bills. CELDF’s founder even told Reuters that bankrupting a community might be “exactly what is needed.” From the report:

And based on an analysis from a professor of law at Boston College, CELDF’s Community Rights Amendments are open to significant legal challenges. Reuters reports:

“I appreciate their opposition to corporate power and their defense of the environment, but it is flatly unconstitutional,” says Kent Greenfield, a professor of law at Boston College. He said if communities could reject constitutional rights, nothing could stop them from re-segregating schools, for example.

The legal problems arise from three key provisions that most CELDF authored ballot initiatives have in common, impacting nearly every aspect of business and industry, development, and subjecting municipalities to costly lawsuits. The measures:

In Colorado, Coloradans for Community Rights (CCR) is working hand-in-hand with the CELDF. And the campaign is underway with an issue committee registered with the Colorado Secretary of State’s office “To submit, educate and advance the “Colorado Community Rights Amendment.” According to the group’s web site, the ballot issue campaign will focus on fracking, mining and toxic waste, GMOs and “rights of nature,” among other issues.

CCR’s new campaign is a reboot of last year’s Amendment 75, which failed to garner enough signatures to make the ballot. At the helm is Clifton Willmeng, an Amendment 75 backer who the Colorado Statesman calls “an organizer in the anti-fracking movement,” who now serves as CCR’s registered agent. Willmeng had announced that preparations for a 2016 ballot initiative were underway last year when he ripped an agreement to avert ballot initiatives targeting hydraulic fracturing and vowed a “major campaign” to bring the initiative back:

“2015 will be a year of preparation for a major campaign to reintroduce the Colorado Community Rights Amendment — the amendment that was most feared by the CEOs and corporate PR firms, the only one led by volunteer grassroots community members, and the only one that fundamentally tipped the balance of corporate power back toward people and communities”

Now, with Willmeng leading the CCR issue committee, efforts to place an initiative before voters are in motion as the group’s web site includes “coming soon” pages for a 2016 ballot campaign. 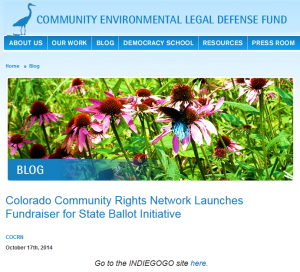 As EID previously reported, CELDF set the stage to jump into an upcoming ballot initiative fight when their Chief Counsel Thomas Alan Linzey penned a guest column in the Colorado Statesman titled How Congressman Jared Polis and Food and Water Watch sold out Colorado. In that piece, Linzey hinted that CELDF would support a ballot initiative targeting the industry in 2016:

“Thus, oil and gas corporations have bought themselves a free ride until 2016, which is the next time that such initiatives can be placed on the statewide ballot. It was a good investment, as they were able to buy it so cheaply, with the help of a Democratic Party on the run and environmental organizations unwilling to challenge the status quo.”

CELDF even hosts a page about the Colorado efforts on their national web site and has been promoting the group’s fundraising efforts to their network of supporters. In a sign of future involvement, Coloradans for Community Rights features a page on their own website, currently blank, but promises to highlight the relationship under the title “Connection to CELDF.” 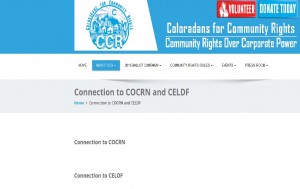 But further evidence of how closely the groups are working together is found on the Coloradans for Community Rights fundraising page where the connection is explained in more detail:

“With the help of the Community Environmental Legal Defense Fund, this movement has written and enacted over 160 local “Bills of Rights” across the country. These Bills of Rights serve to protect individuals and communities from corporate activities such as fracking, mega-mining, factory farming, sewage sludge dumping, GMO farming, pesticides, and many more.”

Coloradans for Community Rights even advertise a “perk” for donors who contribute $1000 to earn a spot in the CELDF Democracy School Training. 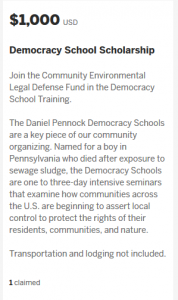 While the Colorado Statesman describes the anti-fracking movement as suffering from a “drop in momentum, funding,” this desperate reboot of a failed campaign may be the most extreme yet. For example, Mora County, N.M., resident Frank Splendoria said this about CEDLF and the local ban passed in his community:

“It was totally foolish to begin with, to even try this. How do you pass an ordinance that’s going to override the state and the federal constitution? I don’t know if they were playing us in Mora County as suckers or they were sincere in their beliefs. I would probably tend to the former rather than the latter, given that Mora County was the first county to try this and failed miserably at it. I don’t know where we would find the money. If you look at the county’s budget, they barely have enough money to provide the bare essential services … (The ban) hasn’t made any sense to anyone with any sense to begin with.”

And back in Ohio, Youngstown voters have rejected a Community Bill of Rights measure four times, each time with a larger margin. That’s because the Community Bill of Rights is not just about fracking; it’s a risky proposition backed by a group that has no regard for the mess they leave for communities whose taxpayers are put on the hook for the legal bills left in their wake.