The Sierra Club released a report last week attempting to argue that its “Beyond Coal” campaign is the reason that the United States has been able to achieve dramatic greenhouse gas reductions even though every credible organization from the Intergovernmental Panel on Climate Change (IPCC) to the International Energy Agency (IEA) to the Energy Information Administration (EIA) has said that it’s thanks to fracking and the increased use of natural gas that U.S. CO2 emissions are at a 27 year low.

Of course, this is the same organization responsible for the “Beyond Natural Gas” campaign, which seeks to end the use of natural gas – the very fuel that is providing these dramatic declines in emissions. So it’s no surprise Sierra Club trumpeted the following tweet by Bloomberg Philanthropies, one of its partners in the “Beyond Coal” campaign: 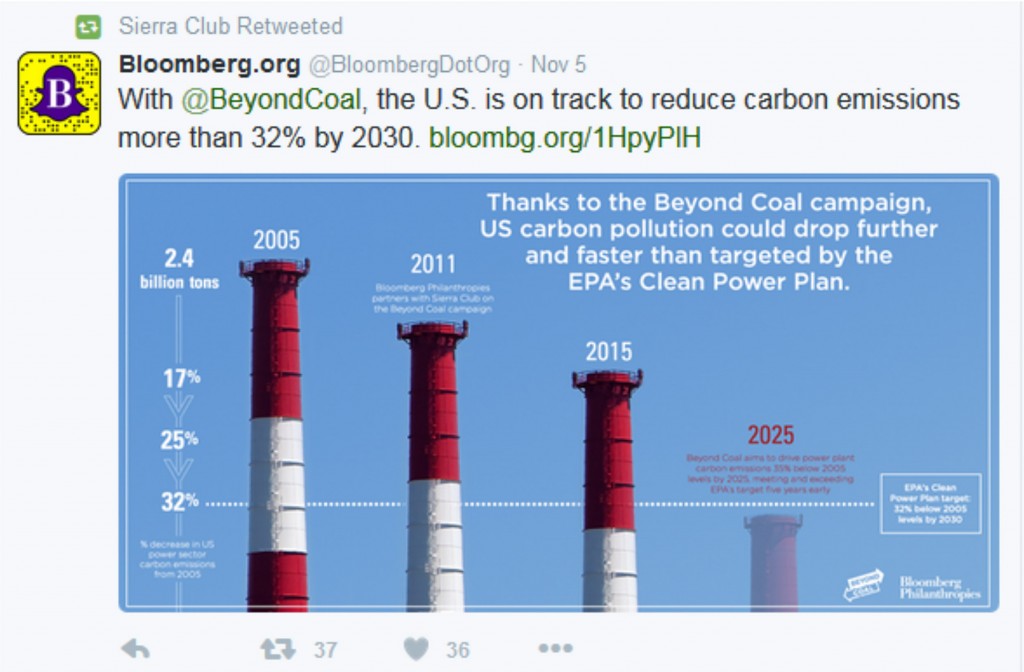 But while the Sierra Club attempts to take all the credit, even this organization can’t really get away without (reluctantly) acknowledging that natural gas has played a huge role in reducing carbon emissions:

“We project that as a result of recent coal retirements, as well as advocacy for related policy measures like efficiency and demand response and market forces including historically low natural gas prices, electric sector coal use in 2015 will be approximately 9 percent lower than in 2014…”

Interestingly, Sierra Club’s own research indicates a future outlook spearheaded by natural gas is even brighter. In a hypothetical scenario set forth in the report in which all U.S. coal-burning power plants set to retire in the next 10 years were replaced exclusively with natural gas rather than with renewables, the Sierra Club projects CO2 emissions would continue to plummet, as the following graphic and excerpt from the report illustrates. 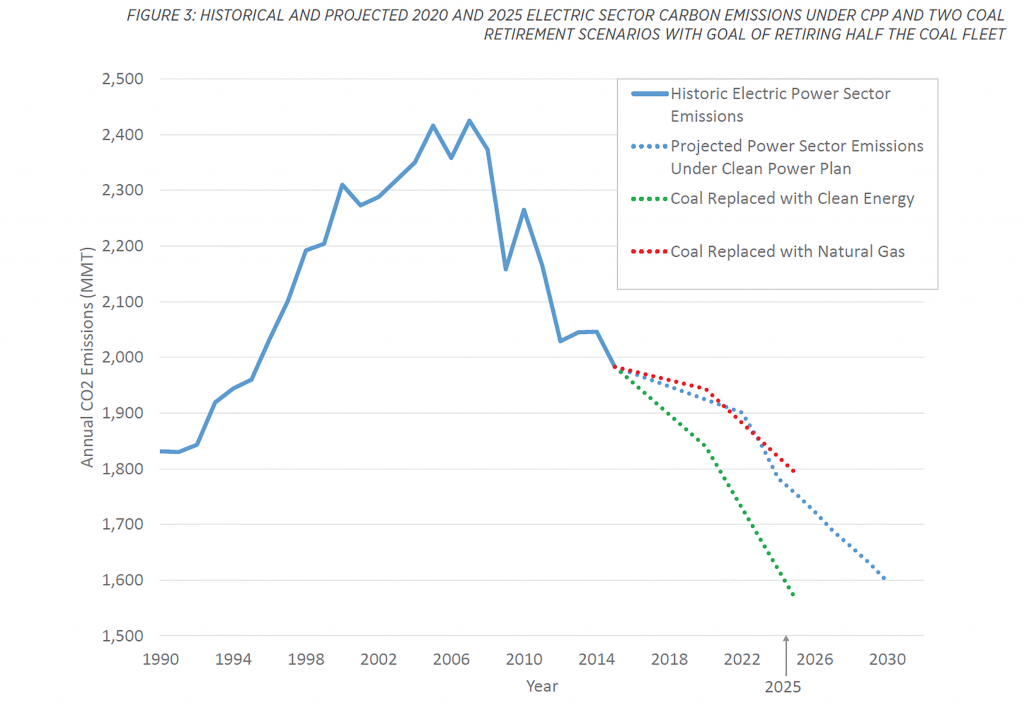 “… we analyzed the carbon emission impacts of replacing one half of the U.S. coal fleet by 2025, under two replacement scenarios: 100 percent zero-carbon clean energy and 100 percent natural gas… we could accelerate EPA’s 2030 CPP target by as much as 5 years depending on whether we replace coal plants likely to retire in the coming years with zero-carbon renewable energy or natural gas.”

A 100 percent renewable scenario would drive emissions even lower, according to the Sierra Club, but such a scenario is not realistic. The Energy Information Administration (EIA) estimates that by 2040, 80 percent of our energy will still be fossil-fuel based. In addition, renewables will need natural gas in order for them to grow into a more significant part of our energy mix.

The graphic also clearly indicates the natural-gas only scenario would actually reduce carbon emissions below the Clean Power Plan projections (which include a mix of renewables and natural gas) at one point in the early 2020s. And over the 15-year timeframe shown, emission drops would be right in line with Clean Power Plan.

So let’s get this straight: The Sierra Club opposes a technology that its own research shows will help address its No. 1 environmental concern – global warming – by reducing carbon emissions.

Maybe that’s why – in an attempt to save face – the organization has been forced to take the delusional stance that its “Beyond Coal” campaign is solely responsible for coal plant retirements heading into December’s climate change conference in Paris:

“As a result of our work, buoyed by plummeting clean energy prices, we have secured record coal retirements over the past five years, catapulting the U.S. into a leadership role in transitioning our economy to lower-carbon sources of energy.”

Of course, Sierra Club’s self-serving conclusion is all premised on the false notion that power plant conversion to renewables in the past five years has played a larger role in reducing CO2 emissions than conversion to natural gas.

But the facts suggest otherwise.

In terms of thousand kilowatt hours over the last 12 months in which data is available (August 2014 to August 2015), coal is down 405 thousand kwh since 2010, while natural gas has increased 279 thousand kwh and renewables are up 108 thousand kwh. According to the Sierra Club’s report, 41,978 megawatts of coal-fired electricity have been retired since 2010, and 15,760 megawatts of coal-generated electricity have already been retired in 2015, with potentially 6,978 mw projected to go offline by the end of the year. Renewables have filled just three percent of the void.

So any way you slice it – considering natural gas produces half of the carbon emissions of coal when it burns – shale gas has played a huge role in reducing carbon emissions from the power sector.

In fairness, giving credit where credit is due is simply not in the best interest of the Sierra Club, which once supported natural gas as the bridge fuel before abruptly doing a 180-degree turn in 2013, declaring its disdain for natural gas in a move that many have speculated had more to do with political expediency than logic.

Meanwhile the EIA has said natural gas has prevented more than one billion metric tons of carbon dioxide from being emitted from the nation’s power plants since 2005. The IPCC, which the Sierra Club has called the “gold standard” for climate science has said “the rapid deployment of hydraulic fracturing and horizontal drilling technologies, which has increased and diversified the gas supply… is an important reason for a reduction of GHG emissions in the United States.”

A report released this week by the Manhattan Institute shows that natural gas is responsible for nearly 20 percent of carbon dioxide emission cuts since 2007 and that for every ton of CO2 emission reductions attributable to solar power, 13 tons can be attributed to natural gas. That is because natural gas is quickly becoming the electrical generation fuel of choice, as it became the leading source of U.S. electricity for the first time in April 2015. Not coincidently, monthly power plant emissions reached 27-year low in April that month.

In other words, evidence of shale gas’ massive role in reducing U.S. power sector carbon emissions to nearly 10 percent below 2000 levels has become so overwhelming that even the Sierra Club can’t deny natural gas’ climate benefits any longer.