The North Norwich, New York (Chenango County) town board invited David Slottje (the “Great Davidski“) to speak on the process of enacting a moratorium this past week.  The town board, at the outset of the meeting, told the audience Slottje’s invitation didn’t necessarily mean they were looking to enact a moratorium or were against natural gas development, although one has to wonder why they invited him then, given his reputation as a hawker of the Park Foundation agenda. The meeting was, as I new would be the case, long and drown out, with Slottje giving an hour and a half long presentation and barely any time for audience question and answers.  He certainly revels in the attention, as this is par for the course.

Slottje’s lengthy presentation is all too typical though readers will recall his comrade in arms, Mary Jo Long, promised the Afton town board he could do his presentation in twenty minutes (good thing we saw that coming).  It very similar to all the other presentations he had done in the past, with just minor tweaks to reflect his adjustment to criticisms.  He now omits the word “ban,” for example, pushing instead for less threatening and easier to sell moratoriums.  He also now takes several jabs at our Energy in Depth team.

He made it seem, for example, as if he was going to tear one apart Tom’s entire “20 Questions, 20 Answers” posts apart, doing a big build up like some boxer talking to the press before a bout, referring to this blog as “the grandaddy of industry blogs” (Video 2 – 38:20)  He then focused on a slide where he did no more than indicate he disagreed with Tom on compulsory integration, although he proceeded to hyperventilate over it, calling Tom’s answer to Question 5 “outright deception.”

He claimed a state regulation wasn’t written by the State (“Albany” in the words of the questioner, although Slottje implies Tom said it) but, rather, by an oil and gas attorney named Tom West (as if that, even if true, didn’t make it a state regulation once adopted).  He then proceeded to say Tom’s answer was “fraud” arguing he had somehow not disclosed the well bore could go under a non-leased property or that hydraulic fracturing could take place underground on that property.  Tom, however, clearly talked about well pads, not well bores or hydraulic fracturing.  See for yourself.  Here is the question and Tom’s full answer to the question raised:

QUESTION 5:  What adjacent properties will be affected by Albany’s compulsory integration of the lease holder’s neighbors’ land into his contract and gas drilling husiness?

No landowner can be forced by compulsory integration regulations to enter into a gas lease or to permit natural gas well pads on their property.  Indeed, “DEC’s integration order will not give the well operator the right to enter your property.”  What the regulations are about is protecting “what is known as your ‘correlative right’ to an opportunity to receive the benefits of oil or gas beneath your acreage.”

If you take the time to watch this segment of Video 2 (and please do, if you watch nothing else), you’ll notice Slottje ignored the source for the quote Tom used in his answer and leaves the word “regulations” out of his “retyping,” in readable font, of Tom’s answer.  Here’s how Slottje rewrote what Tom said above:

No landowner can be forced by compulsory integration…to enter into a gas lease or to permit natural gas well pads on their property.  Indeed, “DEC’s integration order will not give the well operator the right to enter your property.”

He left out the word “regulations” and the link for a reason – because the New York State DEC web page on compulsory integration regulations was the source for what Slottje referred to as “fraud.”  Here, in fact, is a screen shot:

David Slottje can raise his voice and intone all the righteous indignation he wants, but it’s not Tom Shepstone who’s committing fraud.  Leaving key words and a link out of a quote to hide the source and suggest someone else is being deceptive, might be fraud, however.  It’s certainly unethical behavior.  Let the reader judge who’s lying and who’s telling the truth from the evidence and let Slottje sue the DEC if he thinks their answer is wrong.  It sounds like that’s what he’s planning.  Meanwhile, we love the fact he thinks of us as the “grandaddy of industry blogs.”  No greater praise could come our way.

Remember, Slottje knows just about everything.  Certainly, there’s no doubt in his mind on that score.  He claims there is no takings case for Attorney Tom West to pursue, but then turns around to say he will file takings claims of his own for clients whose land is compulsory integrated.  Yes, we were confused by this, too.  It appears only landowners who gain added value, not those whose value is actually taken, are entitled to compensation in the Slottje universe.  Interesting argument.

Slottje also pushed the town to pass a moratorium before the Department of Environmental Conservation (DEC) releases the Supplemental Generic Environmental Impact Statement (SGEIS). He argued a town would win a lawsuit if sued at any time, but he is, clearly, much more confident of winning where a moratorium is enacted before the SGEIS is released and regulations are enacted. He even suggests waiting until after the SGEIS is released could cost towns millions in taxpayer money.  He just briefly mentions the amount of taxpayer money natural gas bans have cost Dryden and Middlefield to defend. You can watch his whole presentation below.

Following this 105 minute presentation, the town board asked questions. One board member asked about the appeal for the Dryden and Middlefield cases.  Slottje took the opportunity to tell everyone exactly how he would have handled it.  Although there is a 60 day window to file a notice of appeal, he claimed he would have done it the next day.  He also argued filing a notice of appeal doesn’t necessarily mean the client will appeal. West still has plenty of time to perfect his appeal and submit it, of course, but Slottje wanted everyone in the room to imagine he was the brightest guy in it, and so we listened, and listened and listened some more.

The next question from the board was whether or not they would be liable if they enact a moratorium.  Slottje tried to comfort the board by telling them they can be sued for anything, but if they get threatened or sued they can simply “pull the plug” on the moratorium (thus, it would just be a waste of time, instead of a law suit).  He didn’t address where the legal fees for all this pointless posturing would come from, but we know enacting a moratorium can be costly.  He also offered the board the deal of a lifetime, better than the Brooklyn Bridge.  Wait for this.  He told them, if they get sued, he could get them a good lawyer for free, and all they would have to do is pay legal fees totaling about $2,000.  Wait, you mean there is still no such thing as a free lunch (as we have said here since day one)?

He also suggested there is a large firm in Manhattan that would represent the town for free, but continued to instruct the board they could revoke the moratorium at any time (see video below).  This is good lawyering – don’t worry, if I’m wrong, you can back out any time?  I kept looking for this wagon out back: 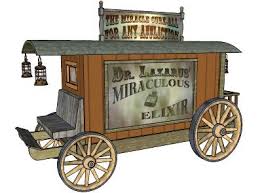 Now, while it’s nice there is a way out for a board that simply signs on the dotted line without completely understanding the damage they are doing to their town, it is also important to remember the town has already spent taxpayer money and time allowing Slottje to come in an speak for an hour and a half.

Next the floor was open to North Norwich residents. One man wanted to know if six months worth of a moratorium would really help the town decide if natural gas exploration was safe.  Slottje said no, six months wasn’t long enough and it would need to be longer (revealing the whole thing is nothing but a delaying scam). He said the town needed time to make a road use law.  He also mentioned the town could extend the moratorium as needed.  Can anyone tell me why it would possibly take more than a month, let alone six months, to enact a road law or develop a road use agreement, several excellent examples of which already exist?

A woman asked who would be responsible if roads and infrastructure is damaged. Slottje told her the natural gas industry would be held responsible for it.  Gas companies strive to be good neighbors and willingly fix roads, spending hundreds of millions of dollars doing so.

Another person questioned whether the SGEIS would affect the strength of the moratorium.  Slottje said no but hastened to push the town to pass a moratorium, indicating his reasons are more political than legal. He described the process of enacting a moratorium and told the board they didn’t need to wait until their next town board meeting, but, instead, could hold a special meeting. They would then need to submit the moratorium to the Chenango County Planning Department and see what they had to say which can take up to thirty days.

One natural gas supporter stood up and asked Slottje how the Park Foundation felt about natural gas development in New York State.  The Great Davidski seemed irritated and told the questioner they (he and Helen Holden Slottje, his wife and legal partner in this enterprise) would do what they thought was right and pay no attention to their Park Foundation funders.  Too bad the questioner didn’t ask how the organization the Slottjes created (the Community Environmental Defense Council) gets by claiming to be a charity when all they do is lobby local governments to pass bans and moratoriums in the interest of their NIMBY funder.

Another man asked if Slottje was being paid by getting moratoriums passed. He initially dodged the question but later answered it, saying he didn’t receive bonus money for getting a certain number of moratoriums passed.  He also told the audience the town would not be considered the CEDC’s client unless it accepted his offer.  He also said he represents over 100 towns.  Hmmm…who is he really representing; them or the Park Foundation?

Perhaps the most frustrating comment came from the town supervisor. One woman stood up and told the board, if she had yelled like Slottje had, she would have been removed from the meeting. She felt the town board wasn’t representing its constituents.   Her point was that many candidates who got elected on anti-natural gas platforms had no idea how to actually run a town. The supervisor replied by stating he still needed to learn more about natural gas and he had only been in office since January (eight months). Is it any surprise the big issue in the town was natural gas? Shouldn’t a town supervisor understand the issue in entirety before taking on the responsibility of guiding a town through the issue?

Another individual got up and reprimanded the board for not going out to learn more. He said they hadn’t been attending informational meetings about natural gas development nor had they traveled to Pennsylvania to see it first hand.  The board told him “learning about a moratorium is just as important as learning about facts.”  Just stunning.

The meeting got heated during the question and answer session. It was clear Slottje desperately wants to get these moratoriums passed before the SGEIS is released by the DEC.  Hopefully, the North Norwich town board will go out and first learn the facts about natural gas.  It’s hard to believe they’ve waited until now.  Sadly, by not doing so, they have positioned themselves as the unwitting star in the Great Davidski’s magic show.