In essence, the legislation codifies into law the Department of Energy rule on small-scale exports, according to Rep. Johnson:

“This legislation would ensure that the DOE rule will become law and not subject to the whims of future presidential administrations and policies. I thank Rep. Henry Cuellar for his help on this important bipartisan bill, and now the Senate needs to take the baton from us and pass this legislation so it can be signed into law.”

H.R. 4606 passed the House with great bipartisan support, demonstrating that America’s energy independence, and its role in creating positive geopolitical gains, is not a party issue, a fact noted by Rep. Cuellar:

“This bipartisan legislation codifies the DOE’s recent efforts to encourage the exports of small volumes of natural gas, as countries continue to look to us to meet their natural gas needs. I look forward to continuing to work with members on both sides of the aisle to encourage more natural gas exports, directly increasing our energy independence and security.”

Yesterday, Rep. Johnson spoke on the many benefits of codifying the small-scale rule on the House floor. Be sure to watch the video below for more on how America’s abundant natural gas is helping to shape its energy future:

The U.S. Department of Energy’s (DOE) new rule aimed at streamlining the small-scale liquefied natural gas (LNG) export application approval process is now officially in effect. According to the DOE, this move will fast track applications, which will further bolster America’s newfound status as a leading natural gas exporter.

Accelerating the approval process for small-scale exports has been a legislative and administrative priority for nearly a year, as America’s natural gas production continues its upward trajectory. The new rule is designed to cut costly, duplicative red tape that previously hindered the export process, and will provide benefits to producing states and U.S. trade partners alike. As DOE Secretary Rick Perry noted upon announcing the rule:

“The so-called ‘small-scale rule’ will further unleash American energy by reducing the regulatory burden on American businesses while also providing significant benefits to our trading partners in the Caribbean, Central America and South America.”

In short, under the rule, the DOE will automatically approve LNG export applications if they are at or below 51.75 bcf of exports per year, and do not rise to the level of requiring an environmental review. As the rule states:

“Applications that satisfy these criteria are requesting authorization for ‘small-scale natural gas exports,’ and DOE deems such exports to be ‘consistent with the public interest’ under the Natural Gas Act.”

The push for a change in the way small-scale LNG exports were permitted through the agency began last year, with the introduction of legislation in both chambers of Congress. In the House, Rep. Bill Johnson (R-OH) authored the Ensuring Small Scale LNG Certainty and Access Act, while Senators Marco Rubio (R-FL) and Bill Cassidy, MD (R-LA) introduced the companion Small Scale LNG Access Act (S.1981) in the Senate.

The lawmakers applauded the DOE’s announcement, which mirrored the intent of their legislation, noting the rule would have a positive ripple-effect throughout the U.S., particularly in areas developing shale formations. As Rep. Johnson told Energy In Depth following the DOE rule finalization:

“I’m glad the Trump Administration and the DOE decided to move ahead and finalize a rule allowing these exports. It’s a major win for Eastern and Southeastern Ohio that I represent, and for strengthening ties with our allies abroad.”

Likewise, Dr. Cassidy, a member of the Senate Committee on Energy and Natural Resources, declared it a win for his state’s workforce, and the allied community:

“I applaud the Trump Administration for recognizing the benefits of our proposal and putting it into practice. This decision is a win for Louisiana workers, a win for the environment, and a win for our neighbors in the Western Hemisphere.”

Sen. Rubio echoed the sentiment, noting the move will boost a growing segment of Florida’s economy, and “expand and strengthen U.S. ties with our Caribbean and Latin American partners.”

The United States is continuing to increase its presence in the global energy marketplace, and now exports more natural gas than it imports for the first time since 1957. Data from the U.S. Energy Information Administration (EIA) show U.S. exports in 2016 were more than three times larger than 10 years ago, a trend that is expected to continue. 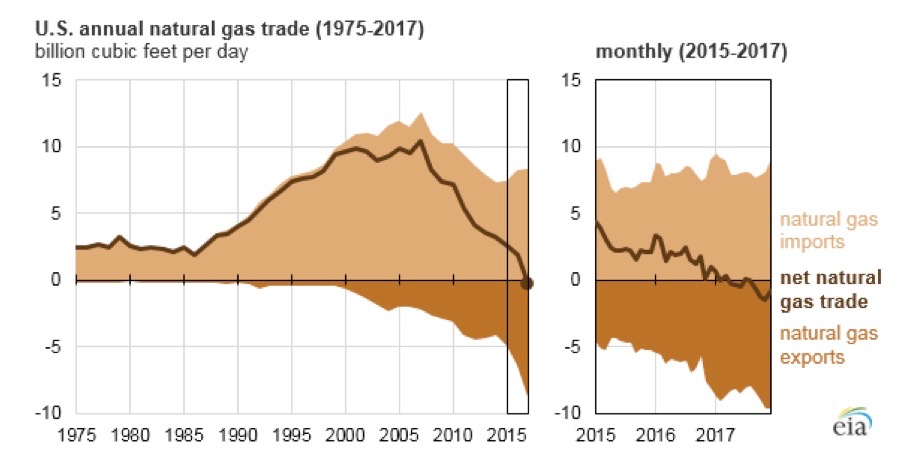 With the U.S. atop the leaderboard in natural gas production (a position attained largely on the back of development in the Appalachian Basin), small-scale LNG exports represent yet another opportunity for the country to benefit from its natural resources – an opportunity Rep. Johnson sees worth pursuing.

“We are currently the world’s largest producer of natural gas, with trillions of cubic feet of recoverable natural gas beneath our feet. We should be doing all we can to take advantage of this abundant, God-given, job-creating resource. This [small-scale export rule] is another positive step in taking advantage of this opportunity we’ve been blessed with.”

Last year, U.S. LNG exports quadrupled. As the following EIA chart shows, U.S. LNG exports have surged from being virtually non-existent in 2015 to levels that have the U.S. on track to become one of the top-three LNG exporters in the world by 2023. 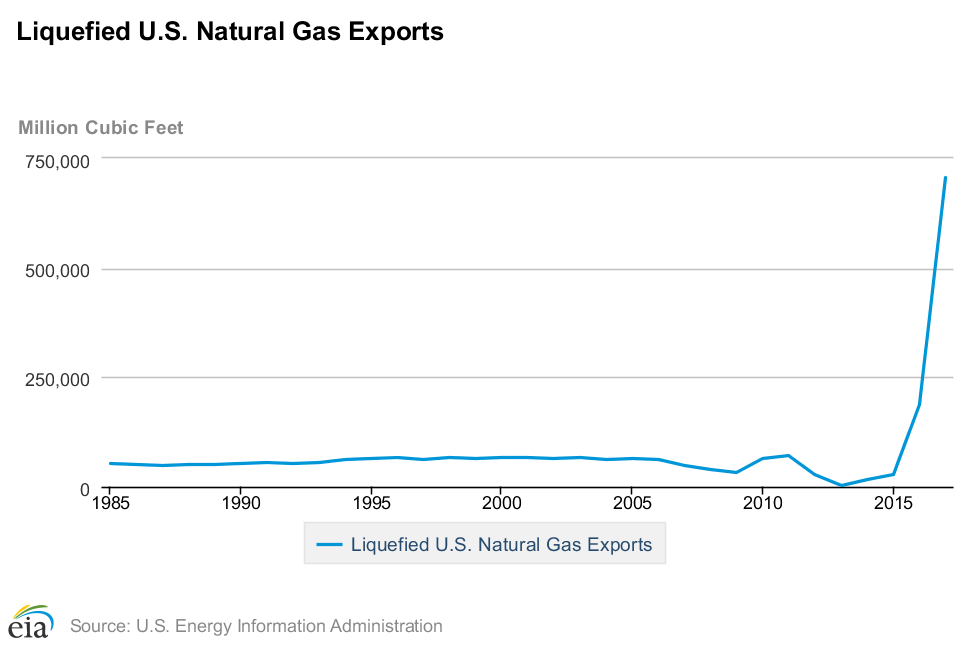 Mexico, China and South Korea represented over 50 percent of the United States’ total exports last year, with Mexico accounting for 20 percent (and Mexico’s share will continue to climb as the nation turns increasingly to natural-gas fired plants for their growing energy demands).

While small in scale (as implied) in comparison to exports to Asia and Mexico, demand for LNG sold on a spot basis in Latin American and Caribbean nations continues to increase at a sizeable rate.

As The Hill notes, the U.S. small-scale export market is “mainly limited to the Western Hemisphere, including the Caribbean, South America and Central America.”

While the demand is high (and growing), the U.S. is positioned to increase its supply to the region, and doing so through small-scale exports achieves this, according to the DOE.

“Many of the countries in these regions do not generate enough natural gas demand to support the economies of scale required to justify LNG imports from large-scale LNG terminals via conventional LNG tankers.  The small-scale LNG export market has developed as a solution to the practical and economic constraints limiting natural gas exports to these countries.”

While the U.S. and Europe look to natural gas as a low-cost, low-emission source for energy generation, diesel replacement, and bunker fuel, the demand for natural gas in these nations is driven almost solely by the need for electricity generation.

The Caribbean nations are an expected consumer of the United States’ growing natural gas market. As U.S. production began to increase, leaders in the Caribbean recognized the potential for the low-cost, low-emission energy supply, as a 2014 report from the Institute of the Americas indicates:

“The natural gas boom and shale wave in the US have further piqued the interest of policy‐makers and project developers in the Caribbean. There is great hope that the opportunity for cheaper natural gas supplies afforded largely by the United States’ energy revolution will open a new chapter for the Caribbean’s energy outlook and an alternate to the status quo.

“There is of course great attention focused on the potential for “cheaper” natural gas due to the excess capacity in the United States. More specifically, the potential for LNG imports from the US Gulf Coast export market seems to be a natural fit for the Caribbean.”

More recently, a 2017 Wood Mackenzie report estimated natural gas imports into the region would grow six-fold over the next decade.

Aside from the economic opportunities for the United States to meet that demand, there are geopolitical implications as well. In urging advancement of the new rule, Senators John Barrasso (R-WY), Cassidy, and Energy and Natural Resources Chairwoman Lisa Murkowski (R-AK) sent a letter to Sec. Perry addressing the issue, while Sen. Rubio spoke to these concerns upon announcing his small-scale legislation last year:

“This measure would bolster our existing ties with Caribbean and Latin American nations while ensuring that bad actors in the region, including Cuba and Venezuela, do not reap its benefits.”

Ensuring a reliable, unimpeded supply of natural gas energy would go a long way to reduce the regional influence of Venezuela under President Nicolas Maduro. The regime, currently under sanction from the U.S., Canada and the European Union, has resorted to buying crude oil from Russia, among others, to supply Cuba and retain its dwindling pool of allies. Undercutting the subsidized energy supply it has been providing Caribbean states by increasing the volume of American energy exports with further diminish the regime’s position in the region.

Global energy demand is projected to grow by 30 percent between 2015 and 2040, with natural gas expected to makeup 40 percent of that growth. It is imperative – for economic and geopolitical reasons – the United States is well positioned to fill the supply gap. While America’s oil and gas industry continues to grow, and strengthen the nation’s economy and role in the global marketplace, the need to continuously look for ways to responsibly unencumber the industry remains a priority. This new rule is another step in the right direction, and goes a long way to ensure small-scale exports generate large-scale benefits.