Society of Environmental Journalists Strikes Out On Fracking Yet Again

This week Society of Environmental Journalists (SEJ) annual conference is being held in Pittsburgh, Pa. — a town that has been dubbed “The Energy Capital of the East” thanks to the abundance of Marcellus Shale natural gas nearby. Pittsburgh is a prime example of a city that has reaped the benefits of the shale gas revolution despite efforts by anti-fracking activist organizations to put a stop to Marcellus development.

So it’s ironic and disappointing — albeit not surprising, considering SEJ’s past when it comes to anti-fracking activists — to learn that while this group of journalists tours shale country they’ll be watching a “documentary” developed by none other than the same bloggers that run the anti-fracking Public Herald. 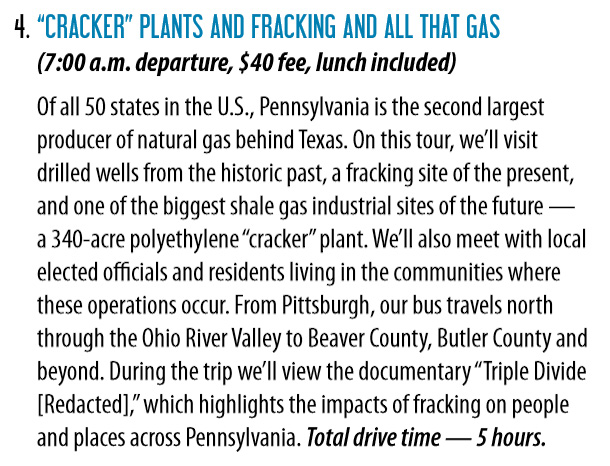 Between Public Herald’s anti-fracking funding and agenda-driven “reporting” (more on this in a moment), the film is hardly an unbiased look at shale development in Pennsylvania.

History of Supporting Activism Over Objectivity

But what do you expect from a group that once sent a letter to the House Committee on Science, Space and Technology condemning CSST’s Energy and Environment subcommittee for kicking out (and arresting) anti-fracking activist Josh Fox from its hearing. SEJ actually defended Fox as a legitimate journalist, saying “journalists come in all stripes,” despite the fact Fox didn’t possess the media credentials required to to film the hearing, not to mention the glaring inaccuracies in his film Gasland.

Interestingly, later in 2012 another group of journalists at the Associated Press called Fox out on his outrageous claims — specifically about non-existent breast cancer spikes near oil and gas development — after talking to actual scientists and experts who actually looked at things like data. Despite this, SEJ stood by their man by staying radio silent as all of this went down. In fact, despite AP demonstrating Fox’s proven lack of credibility and complete disregard for responsible journalism (traits specifically mentioned in SEJ’s vision and mission), SEJ praised Fox and his work as recently as 2016 by referring to him as a “journalist-turned-activist.”

Perhaps even more concerning than SEJ’s poor judgement when it comes to such a well-known activist is the organization’s “oops” moment when it came to fact-checking the background of one of its award recipients. SEJ announced in 2012 that a reporter for the Denton Record-Chronicle in North Texas, Peggy Heinkel-Wolfe, would receive an award for “outstanding in-depth reporting” for her stories about natural gas development in a series that “is the result of a strong commitment to quality journalism,” according to SEJ.

The issue with the award recipient? Heinkel-Wolf was also a plaintiff in a lawsuit against the same natural gas industry she was reporting on, and the only disclosure she ever gave to this in her stories was a single line buried several paragraphs deep in a lengthy article. The biggest irony of all this was that SEJ gave Heinkel-Wolf credit for her stories contributing to a new public disclosure law in Texas, despite her own disregard for disclosing that she might be just a tad bit biased against the industry she was reporting on.

After EID reported on all of this, the SEJ Awards Committee posted an update acknowledging “the appearance of a conflict of interest” at the Record-Chronicle and that the newspaper had declined the award.

More recently in 2016, SEJ actually awarded InsideClimate News (ICN) its annual Award for Outstanding In-depth Reporting for its #ExxonKnew series, published in 2015. With the way the #ExxonKnew campaign has unraveled in recent months, perhaps SEJ would have been better off handing the award to the satire newspaper The Onion, which actually predicted such a farcical campaign back in 2013.

Continuing this trend, SEJ is now legitimizing an inaccurate activist film as a potential source for journalists covering shale development by forcing attendees to watch it while on a five-hour bus tour.

As SEJ members embark across shale country, they will also be watching a newly released film called “Triple Divide [Redacted],” which was written, directed and produced by anti-fracking activists Josh Pribanic and Melissa Troutman, and stars actor-turned-activist Mark Ruffalo.

The film is part of a “report” Pribanic and Troutman did on water contamination complaints in Pennsylvania that was “funded by grants from The 11th Hour Project and The Heinz Endowments.” Both the 11th Hour Project and Heinz have been major funders of the anti-fracking groups like Physicians, Scientists and Engineers for Healthy Energy (PSE). That’s the same group that circulated 2012 memo urging environmentalists to make connections between health problems and fracking even when no evidence to support the linkages exist.

In 2013, the Associated Press reported Heinz had given millions of dollars to anti-fracking efforts:

“The Endowments has given out more than $10 million in gas drilling-related grants over the past three years. Many of the grant recipients have criticized the industry.” (emphasis added)

When Pribanic and Troutman’s report was released, the only news outlet to report on it was StateImpact PA – which also receives funding from the Heinz endowments. And as the Marcellus Shale Coalition noted on its blog, the “experts” chosen to give commentary on the report also just so happen to receive funding from Heinz:

“In an incredibly weak attempt to legitimize and validate Public Herald’s research, the bloggers turn to fellow ‘researchers’ to comment on their ‘findings’ – researchers who also receive handsome amounts of financial support from anti-energy foundations, including the Heinz Endowments. Specifically, Anthony Ingraffea and John Stolz, are both Heinz-funded researchers who continue to peddle ‘reports’ attacking natural gas that have debunked by independent experts, academic peers as well as state and federal regulators.”

“As the Chronicle of Philanthropy has reported, Google chairman Eric Schmidt has set up a family fund to rally the public against shale gas, and the Chorus Fund has amassed $40 million for the same purpose. The Heinz Foundation has handed out some $12 million in recent years, mostly to stir opposition in Pennsylvania, where shale-gas extraction has proceeded with bipartisan support. The 11th Hour Project gives about $3 million in annual grants to feed “grassroots” anti-fracking campaigns, targeting California, Maryland, and New York. It also supported the Gasland series.” (emphasis added)

Public Herald and its latest film is yet another example of an echo chamber of activism pushing agenda-driven research. Or in the words of Ingraffea, it is research with “advocacy-laced words and phrases” where “the principal megaphone has been celebrities” such as Ruffalo to push it to the masses.

From a 2015 Ingraffea presentation in Colorado,

“But the principal megaphone has been celebrities. People whose names you know better than [inaudible] celebrity follower, but Mark Ruffalo has a couple million Twitter followers. I’ve never issued a tweet in my life and never will. So, every once in a while Mark emails me or calls me and says ‘What have you got?’ And I give him 144 characters and he tweets it. He is my megaphone. Doesn’t cost me anything, doesn’t cost him anything. We don’t have anything – he doesn’t have the money, I don’t have the money. Well, he’s got more money than I do, but we can’t go on national TV at the drop of a hat, in-between segments of the national news. We don’t have that opportunity. This is unsymmetric warfare, if I could use that phrase. What the industry can do with its PR and advertising arm is infinite, compared to what you or I could do. So, Yoko Ono, Sean Lennon, Mark Ruffalo and a few others, they’re my megaphones.”

Ruffalo has shown time and again that while he may parrot catchy phrases for so-called “experts” (that by their own admission are anything but), he knows very little of the actual process for developing oil and gas. In fact, in his own documentary, “Dear Governor Brown,” about the only thing he got right was that Jerry Brown is in fact the Governor of California. And he didn’t fare much better in “Dear President Obama,” which simply rehashed thoroughly debunked talking points.

All this background considered, it’s not surprising SEJ conference attendees will be forced to view a “documentary” that, like its previous version, makes the claim that there are actually widespread, systemic impacts to water quality right here in Pennsylvania. Fortunately for those of us that call the Commonwealth home, there are currently more than 20 independent studies that show this to be false – fracking is not a major risk to groundwater. That list includes the U.S. Environmental Protection Agency’s findings confirming fracking has not been a major threat to drinking water, as well as three others with similar conclusions from this year alone:

“UOG [unconventional oil and gas] operations did not contribute substantial amounts of methane or benzene to the sample drinking-water wells.” (p. 6)

“Based on consistent evidence from comprehensive testing, we found no indication of groundwater contamination over the three-year course of our study.” (From press release)

Presenting a film produced and echoed by folks with a clear agenda to shut down oil and gas development in the Marcellus as an objective “documentary” is the antithesis of what journalism is supposed to be all about. The reality is shale development is having major impacts on the region – it’s driving new investments, helping to lower emissions and improve air quality, and is enticing manufacturing industries long forgotten (like steel) to come back to Appalachia. What it is not doing is having widespread, negative impacts on Pennsylvania’s water.