Solar companies and grid operators across the country spent ample time planning for this week’s solar eclipse, particularly in California and North Carolina, which dominate the country in solar output. Those efforts paid off, as consumers faced no issues, even as solar output was cut in half in California, dropping from 6,000 megawatts (MW) to 3,000 MW, and North Carolina lost 1,700 MW, due to the eclipse having totality in some locations. How did they keep the lights and air conditioning on for consumers?

As Neal Kirby, spokesman for the Independent Petroleum Association of America tweeted yesterday, it was thanks to alternative energy sources like natural gas.

In California, natural gas and hydropower were used to offset the extreme drop in solar, shown in the following tweet from a California meteorologist of the real-time impacts for the California Independent System Operator (CAISO). 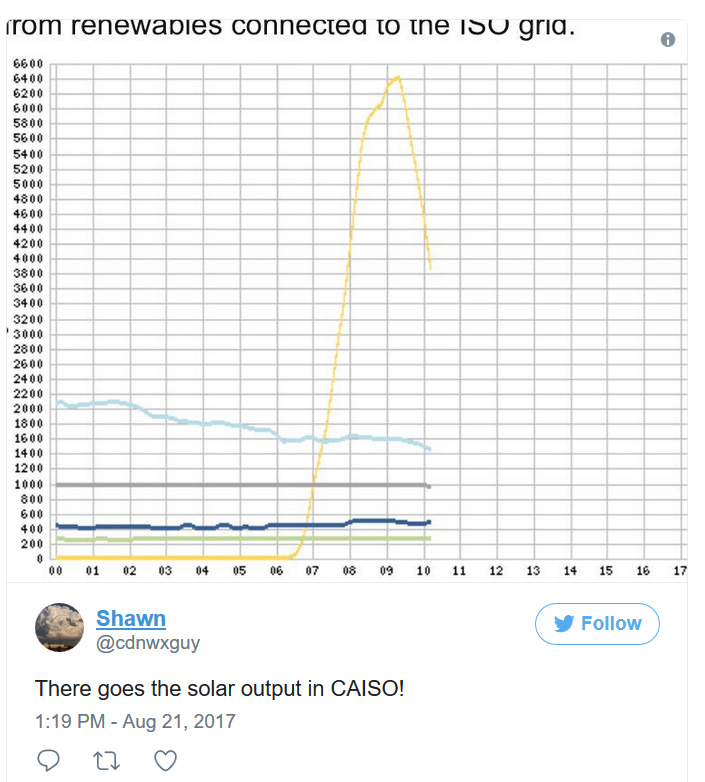 “If there’s any doubt about how planning pays off, we demonstrated it this morning. We didn’t have any major challenges on the system, even minor challenges. We’re very pleased with how smoothly it went.”

“We were able to balance the Duke Energy system to compensate for the loss of solar power over the eclipse period,” said Sammy Roberts, the utility’s director of system operations. “Our system reacted as planned, and we were able to reliably and efficiently meet the energy demands of our customers in the Carolinas.”

That was with a significant loss in output according to Duke Energy:

“Certainly, this is an unusual solar event, but as far as potential impacts to the grid, PJM and its members are prepared. While this is an anticipated event, we routinely plan and prepare for unpredictable events or things that can’t be forecast far in advance, such as severe storms and heat waves.”

Thanks to the advanced planning for this event, and having a process already in place because of the routine need for alternative energy sources as a backup for solar, PJM was able to “rely on their fleet of natural gas power plants to fill in the gaps, combined with the output from coal, nuclear, and even wind farms,” according to Washington Examiner.

Lessons from the Eclipse

The U.S. grid’s performance this week is a testament to how far the solar industry has come in recent years, and to the grid operators’ ability to manage system reliability. But the real takeaway is that despite the oft-repeated activist line that the U.S. grid can run solely on renewables without traditional energy sources, an energy mix including fossil fuels is still needed on a daily basis.

Americans might not see a total eclipse every day – and won’t again until 2024 – but frequent fluctuations in power from the sun and wind are very real. The eclipse put the grid in the spotlight, but the challenges the country was monitoring are issues backup sources like natural gas help mitigate on a daily basis.

As Stephen Berberich, the president of California’s grid operator California ISO, told Fortune recently, natural gas will continue to be an important part of the state’s backup energy supply for renewables:

As natural gas and renewables increase the percentages of power they supply the grid, it is becoming even more apparent that these energy sources are complementary and will be an important and significant part of the future energy mix.