Something Rotten in the Land of No Marcellus

The passing of the new impact fee means a lot of communities, even those outside of the producible Marcellus Shale, will see tremendous payouts. But what about those who are in the Marcellus and unable to develop because of the Delaware River Basin Commission?  Robert Nolan takes an in-depth look at how the numbers add up across the state.

Over 400 years ago, in Shakespeare’s Hamlet, Marcellus uttered a similar, famous quote with reference to the state of Denmark (“Something is rotten in Denmark”).  Poor soul, he could not have known how relevant his name and his famous line would be in 21st century Wayne County, PA.

Earlier this week, on October 15, 2012, Pennsylvania Governor Tom Corbett and other state officials announced the first distribution of “impact fees” paid by natural gas companies for the purpose of exploring Pennsylvania’s abundant Marcellus Shale gas reserves.  And, what an eye opener this revenue ought to be, especially for the residents of Wayne County where Marcellus exploration has been stymied for years due to the inept Delaware River Basin Commission (DRBC) whose inexcusable moratorium prohibiting the harvest of these reserves has left Wayne County residents out in the cold, financially deprived and unceremoniously robbed of their property rights.  Let’s call this what it is: Wayne County got hosed and continues to today.

Neighboring counties where gas drilling is permitted, specifically Susquehanna, Bradford and Sullivan and their municipalities, will reap approximately $32,000,000 (thirty two million dollars) from the “impact fees” in the first year alone.  What’s Wayne County’s windfall?  How about $44,814.22! That’s right, less than forty five thousand dollars, and by many accounts, Wayne County could be on top of some of the deepest, richest dry gas reserves in the Marcellus.

How many gas wells are there or will there be in Philly and those three counties?  What’s the extent of their shale gas reserves?  The answer is…ZERO.

Yet, they have no shortage of antipathy toward the hand that feeds them.  They are the homes of so many self-serving anti-natural gas activists who have the means and the time to travel a significant distance to deprive others of their property rights and the ensuing bounty they themselves reap.  Attend any Marcellus Shale public meeting or DRBC hearing in our region and you’ll find busloads of them there to protest local landowners developing their own natural resources.  They’ll taunt, spread misinformation, attempt to gin up hysteria, fear-monger, call us greedy hicks, wave $20 bills in our faces and tell us how they’ve come on their white horse to save us ignorant Wayne County residents from the errors of our ways. 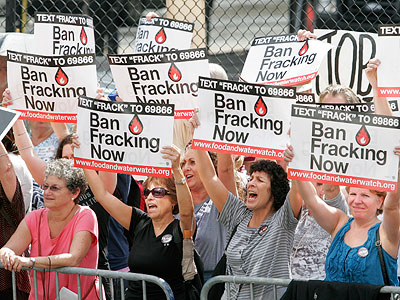 Ironic, don’t you think, that these three counties and Philadelphia will receive a total of $2,977,978.07 in “impact fees” or 66.45 times the revenue Wayne County will receive despite being the hotbed of anti-gas activity?  Do you think they and their local politicians, many who are vehemently anti-gas themselves, will take the high road and refuse those checks from the Commonwealth?  Not on your life. There ought to be a law!  Meanwhile, Wayne County did not receive enough revenue to hire a single police officer or a single teacher.

Further exacerbating this have/have not dichotomy is the standard of living in these three suburban Philadelphia counties versus Wayne County. From the latest US Census data 2006-2010 dollars:

So the anti-natural gas crowd travels far and wide from their typically well heeled, suburban prosperity to deny economically deprived Wayne County any hope of prosperity from the ground beneath their feet. When the “antis” don’t venture to Wayne County, there’s a substantial cadre of local NIMBY’s to pick up the slack.

These include folks like my neighbor, Bronx born and bred, who squats on a 0.74 acre parcel and proceeds to tell the rest of us what we can or can’t do with our land and resources.  A couple nights past, I saw him in town and he stated it was getting chilly, so he was going home and firing up the gas heater!  He never grasped the irony.

You would think these folks would look at their neighbors owning much more land and subject to exponentially higher property taxes; folks who have been wonderful, thoughtful stewards of this bucolic paradise for generations, a neighbor who may be an aging farmer who’s no longer able to work the land; and be happy they could use their resources to ease their tax burden.  No way.  They don’t care!

You might think those who so often decry the landed for being greedy for signing gas leases would realize the substantial ad valorem revenue from the “impact fees” would also afford significant benefit for them as well.  No way…they can’t comprehend such a win/win proposition!

My challenge is to you Wayne County folks who have been sitting on the sidelines, who have let others fight for your property rights, for your way of life, for the preservation of your natural resources and the bounty they afford you. How much longer will you be silent while a small group gives of their time, sweat equity and limited financial assets for your benefit?  How can you be content or silent while an unelected body, the DRBC, holds you and your property rights hostages?  Will you continue to sit back on the sofa watching the NFL while you’re being robbed blind?

Thomas Jefferson, in 1776, wrote, “We hold these truths to be self-evident…that they are endowed by their Creator with certain unalienable Rights.” Almost 75 years later, Frederic Bastiat wrote, ”The mission of the law is not to oppress persons and plunder them of their property, even though the law may be acting in a philanthropic spirit. Its purpose is to protect persons and property… If you exceed this proper limit — if you attempt to make the law religious, fraternal, equalizing, philanthropic, industrial, or artistic — you will then be lost in uncharted territory, in vagueness and uncertainty, in a forced utopia or, even worse, in a multitude of utopias, each striving to seize the law and impose it on you.”

What will history write of you?