On the same day the Associated Press reported the rate of earthquakes in Oklahoma has dropped “dramatically” since May, a new study shows how current wastewater injection policies could reduce Oklahoma’s seismic activity to background levels in five to 10 years.

“On the basis of our results, the mandated saltwater injection rate reduction in 2016 was an effective step in mitigating the seismic hazard associated with the occurrence of triggered and induced earthquakes in Oklahoma because injection rates in both CO (central Oklahoma) and WO (western Oklahoma) drop below the observed triggering thresholds. Consequently, widely felt M ≥ 3 earthquakes in the affected areas, as well as the probability of potentially damaging events, should significantly decrease by the end of 2016 and return to tectonic levels within the next few years.”

In February and March of this year, the Oklahoma Corporation Commission (OCC) issued directives to reduce wastewater injection into the Arbuckle formation by 40 percent below 2014 levels in the state’s two most seismically-prone areas — central as western Oklahoma. The Stanford study suggests those policies — along with the market downturn — are effectively reducing the number of earthquakes in the state.

Previous research from EID showed that the rate of earthquakes in Oklahoma of magnitude 2.8 or greater had declined 81 percent in November when compared to the peak month of June 2015. Instances of M 2.8-and-greater earthquakes —the minimum size for which the Oklahoma Geological Survey (OGS) has a complete catalog — have also declined 80 percent from January, as the following EID chart illustrates. 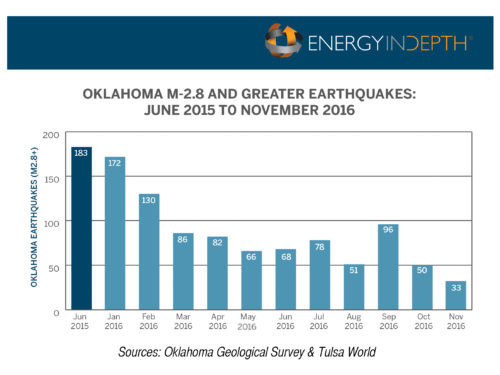 As the Associated Press notes, “The rate of earthquakes in Oklahoma has dropped dramatically since late May, when the state limited wastewater injections into energy wells…”

Before the restrictions went into effect on May 28, Oklahoma averaged 2.3 magnitude 3.0 or greater quakes a day. The rate of M-3.0-or-greater quakes has dropped to 1.3 a day since then and was down to 0.8 per day in November, according to data posted on the Tulsa World website.

The Stanford study notes the average injection volume-per-unit in the 15,000-square mile “Areas of Interest” it studied are now similar to 2009 levels, which was the last year in which earthquakes were at historical background levels. The study notes that these two areas “contain almost all recent earthquakes.”

As past Zoback-led Stanford research has noted, billions of barrels of wastewater were injected into the highly-permeable Arbuckle formation over the past six years. The researchers believe the Arbuckle is in hydraulic communication with the crystalline basement, located directly below the Arbuckle, and that pressure from wastewater injection triggered seismicity in faults located in the basement.

“Several months after wastewater injection began decreasing in mid-2015, the earthquake rate started to decline,” Langenbruch said. “There is no question that there is a significantly lower seismicity rate than there was a year ago.” (emphasis added)

So why haven’t earthquakes completely subsided? Interestingly, the study finds that there were two- and five-month delays between the point in which earthquakes started to subside once injection rates fell below these thresholds in western and central Oklahoma, respectively. The researchers believe the delays can be explained by the fact that it takes time for the pressure from injection to spread throughout the formation, which could explain why maximum earthquake rates were seen months after peak saltwater injection in 2014 and 2015.

In other words, as Langenbruch told E&E News, “It is clear that these earthquakes can be stopped by reducing injection rates. The bad news is, it will take some time.”

But moving forward, the researchers believe that the OCC’s wastewater restrictions will yield a 58 percent decrease in M-3.0-or-greater earthquakes in 2017 and reduce the chance of a quake as large as 5.0 by 43 percent.

It bears repeating that injection of produced water from day-to-day production is the primary cause of Oklahoma’s seismicity — not the fracking process or injection of fracking flowback water.

A recent Zoback study on Oklahoma’s induced seismicity actually found that more than 95 percent of wastewater disposed of in Oklahoma’s most seismically active areas is brine that is co-produced with oil and gas, as Zoback has explained,

The new Stanford report elaborates further on this fact,

As E&E News noted, the areas where most of Okalahoma’s seismic activity has been concentrated are in the Mississippi Lime play, “which has historically had a higher ration of wastewater than most formations” but “is not a growth region at the moment.”

Although reducing wastewater injection volumes has reduced seismicity, it is not without cost. Small businesses, local job opportunities and tax revenue in the areas where restrictions are in place have all taken a hit as a result of the OCC’s directives.

But despite the “significant economic impact” that some of the OCC’s actions have had on oil and natural gas companies, the industry has been coordinating with the state in its response, due to the shared primary objective of managing induced seismicity.

Industry is taking the challenge of managing induced seismicity very seriously. And fortunately, the new Stanford report shows that collaboration with regulatory authorities is producing results, and that induced seismicity can be managed going forward.