The state of American energy in 2020 is one of global leadership, according to American Petroleum Institute president and CEO Mike Sommers. In the past decade, the oil and natural gas industry has revolutionized the global energy markets and now leads the world in energy development, carbon emissions reductions, and environmental performance. The United States is a net exporter of energy for the first time since the 1950s and has increased American oil production to a staggering 12 million barrels per day – all while decreasing emissions, according to API’s annual State of American Energy report.

Here are a few of the key takeaways from this year’s report:

Thanks to technological innovation, the oil and natural gas industry has made major progress toward reducing emissions, while continuing to increase production. According to the EIA, natural gas has reduced carbon emissions in the United States by more than 2.8 million metric tons of carbon dioxide since 2005, making it the largest source of energy-related carbon savings.

In addition, the industry is working diligently to reduce methane emissions. Seventy of the nation’s leading energy companies voluntarily participate in the Environmental Partnership, a collaborative initiative that has decreased methane leakage rates across their operations to only 0.16 percent – 10 times lower than U.S. Environmental Protection Agency estimates. API’s State of American Energy, echoed the effects of the industry’s commitment to decrease their environmental footprint over the last 30 years:

API’s panel discussion Tuesday focused on the importance of innovation and attracting new talent to the industry that will continue to drive progress through the next decade and beyond.

As Karen Kerrigan, President and CEO of the Small Business & Entrepreneurship Council, explained,

“Diversity fuels innovation, which will only help in terms of taking our industry – the energy industry –  to the next level.”

#3 Ongoing Benefits of the Shale Revolution – Here and Abroad

As TV host and skilled trades advocate Mike Rowe described, the benefits of the shale revolution touch every American:

“Energy is always is always in the room… Every single American is relying on it.”

By producing more at home, the United States has reduced its dependence on foreign energy and decreased its vulnerability to supply chain disruptions. America’s newfound energy dominance “offers stability in chaotic times and insulated America from hostile and unreliable supplies of energy,” according to Sommers. In fact, the Global Energy Institute recently announced that energy security risk in the United States has reached its lowest point since 1995.

However, as Sommers explained, “if you want to know the true value of America energy leadership in 2020, you also need to zoom in” to see how American energy “is powering the lives of individuals across our nation.”

The benefits of the American shale revolution are reverberating across the country – from Appalachia, to the Midwest, to the Rocky Mountains of Colorado and the plains of New Mexico. As Terry O’Sullivan, General President of the Laborers’ International Union of North America (LIUNA), said:

“These kind of energy jobs are a pathway to the middle class. They provide hope, opportunity, good wages, with good benefits.”

Here are some of the local impacts highlighted in the report:

As Sommers explained in the report,

“Across our country, communities have felt the positive impact of the abundance of American energy. From decreased energy costs for families to increased investments in school systems and infrastructure, Americans benefit from the economic growth driven by the U.S. natural gas and oil industry.”

The industry continues to face pushback by those who seek to ban fracking, despite its irrefutable contribution to local economies, national security, and the United States’ ability to meet global emissions targets.

API aptly summed up the dangers of such extreme and misinformed policies in one succinct graphic: 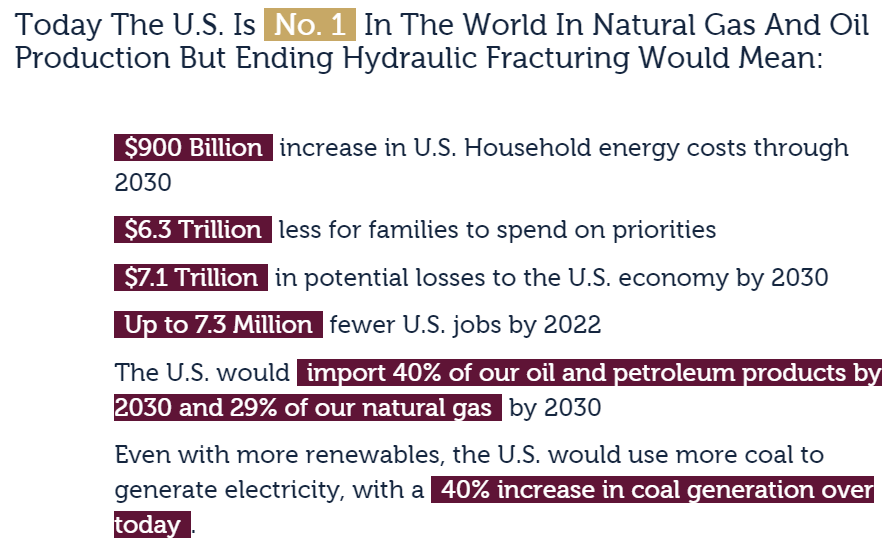 Despite this increasing political pressure, energy demand continues to rise domestically and abroad. With global energy demand projected to increase more than 45 percent by 2050, continued infrastructure investment – to the tune of more than $1 trillion through 2035 – and sound policies to support responsible expansion “will ensure that our abundant, homegrown energy reaches American households, businesses and U.S. trading partners.”

“The nation with the largest and most innovative economy in the world runs on affordable and reliable energy, the majority of which comes from natural gas and oil. Our mission as an industry starts with meeting that rising demand and doing it responsibly. We are relentless in finding and producing affordable energy. And just as persistent in reducing our environmental footprint, improving safety technology, and decreasing emission rates. But we’re not finished.”