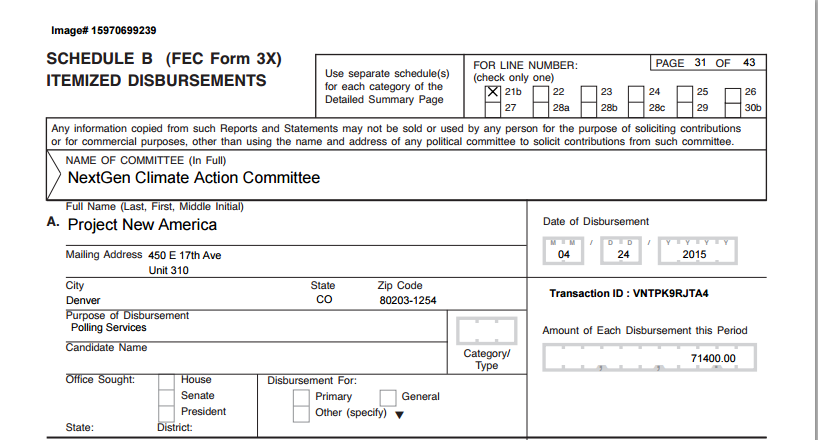 Steyer, whose foundation is known for writing large checks to green groups, is also strengthening his ties with environmental organizations in Colorado. This week, he will be in Denver to accept an award from Conservation Colorado. Dubbed “Colorado’s largest political event for the environment,” other attendees will include elected officials and leaders from the state’s environmental movement.

Last year, Steyer held talks with millionaire Boulder Congressman Jared Polis (D-Colo.) about splitting the cost of putting anti-fracking measures on the statewide ballot. Ultimately, those measures were pulled before they could reach the ballot, and Steyer chose instead to put his money behind a failed campaign against Gardner. Through it all, Steyer worked with “ban fracking” groups and national environmental organizations to effectively campaign against Colorado’s energy industry, its supporters, and tens of thousands of men, women and families whose livelihoods depend on the oil and natural gas sector. He lost badly, but Steyer is coming back for more.

The good news is, with Steyer in town this week, reporters can soon get some answers from the man himself.

Recently filed Federal Election Commission (FEC) disclosures for Tom Steyer’s Super-PAC, NextGen Climate Action Committee show that Steyer has been quietly building his Colorado presence. Specifically, the group has spent nearly $80,000 for “polling” and “research services” with Colorado-based Project New America. The organization bills itself as “a private company that provides candidates, advocacy organizations, and civic engagement stakeholders the tools and strategies to understand and communicate with a rapidly changing America.” But the organization maintains a specialty in reaching voters in western states such as Colorado:

“PNA has helped refine the hinge issues and the relevant vocabulary for reaching western voters and laid the groundwork for a generation of progressive growth.”

During that same timeframe, Steyer also spent nearly $13,000 with Washington D.C. based Hilltop Public Solutions. But that group also has Colorado ties. In fact, staff from the Denver office of the public affairs firm oversaw Steyer’s failed Colorado effort during the 2014 election cycle. Steyer himself visited Aspen last year for an environmental conference, where he provided an overview of his political agenda and strategies.

Now, Steyer is returning to Colorado to be recognized as Conservation Colorado’s 2015 “Rebel with a Cause,” a move that further confirms his ambitions of being a major political force in our state.

Conservation Colorado has a history of lobbying state government on environmental issues and heavily influencing state and local campaigns with the group spending nearly $1 million in the 2014 election cycle:

“All told, Conservation Colorado was a major factor this election season – spending over $950,000 – three times more than we have ever spent on elections before.”

“Following the collapse of the Don’t Frack Denver campaign, Arapahoe County appears to be the next victim of the anti-fracking movement.  Another group, Conservation Colorado, targeted our county by releasing a map aimed at scaring Arapahoe County residents into thinking drilling was arriving in their backyard at any moment.  However, in reality, current state regulation specifies setbacks of 500 feet from residential units and 1,000 feet from schools.”

The organization’s aggressive campaign targeting oil and gas development seems to coincide with the upcoming event honoring one of the “biggest of mega-donors,” to the environmental community.

Steyer returns to Colorado with some political baggage from outside the state. Besides his failed collaboration with national environmental groups during the 2014 election cycle, Steyer’s political operation in Oregon has come under close scrutiny.

Earlier this year, Oregon Governor John Kitzhaber resigned after a scandal erupted over undisclosed payments made to his fiancée, Cylvia Hayes from advisors and an organization with close ties to Steyer for the purpose of influencing state energy policies. According to the Washington Free Beacon:

“An executive at one of Steyer’s nonprofit groups and a political vendor who has received hundreds of thousands of dollars from the hedge fund manager’s political operations helped run the group, which is accused of influencing state energy policy through undisclosed payments to Oregon’s first lady.”

Coming off the heels of the electoral defeat of his extreme environmental agenda and now plagued by his ties to a burgeoning scandal, Steyer’s return to Colorado will shed light on the billionaire’s intentions. His decision to appear at Conservation Colorado’s event while he has been quietly maintaining his political operation shows that he has made Colorado a priority. And recent media coverage of oil and gas issues shows that speculation of how he plans to exert his campaign influence in 2016 remains high. Just yesterday, KUNC radio reported:

“Big Democratic donors like environmentalist billionaire Steyer and Congressman Polis – who funded a ballot push in 2014 – could help fund a ballot initiative in the 2016 presidential election year, but it is uncertain.”

With pro-oil and gas Governor John Hickenlooper, (D-Colo.) announcing at a recent forum that initiatives targeting the industry are not likely to be well-funded, even while Steyer is building a political operation in the state, it begs the question as to where he plans to throw his support next.