A new peer-reviewed Penn State University (PSU) study can be added to the growing list of more than two-dozen scientific reports that find fracking is not a major threat to groundwater. In fact, the report finds “an overall trend of improving water quality” in Bradford County, Pa., “despite heavy Marcellus Shale development.” From the study’s press release:

“The most interesting thing we discovered was the groundwater chemistry in one of the areas most heavily developed for shale gas – an area with 1400 new gas wells – does not appear to be getting worse with time, and may even be getting better,” said Susan Brantley, director of Penn State’s Earth and Environmental Systems Institute and distinguished professor of geosciences.

Based on an analysis of 11,000 groundwater samples collected near 1,385 unconventional natural gas wells in Pennsylvania’s most heavily drilled Marcellus Shale county, the report finds, “no statistically significant deleterious impact on ten analytes related to the aggressive increase in development of unconventional shale-gas since 2008.”

The researchers used advanced “data mining” technologies to evaluate a robust combination of United States Geological Survey (USGS), state and natural gas industry data. That data was then compared to thousands of baseline samples collected prior to Marcellus development in the 1990s from the Pennsylvania Department of Environmental Protection, leading the researchers to conclude that Bradford County groundwater has “either improved or remained level compared to sites sampled in the 1980s” while also noting:

“Rare methane contamination cases are consistent with the overall observation that shale gas production has not downgraded the average groundwater quality overall over time.”

In these rare instances – seven of the 1,385 water wells near natural gas development where the researchers identified “slightly elevated levels of methane” — the report notes that these “gas anomalies” could not be specifically linked to biogenic or thermogenic sources. Further, they found that a vast majority of the water samples with elevated methane were near mapped faults, valley and anticlines, indicating natural methane migration.

As the following graphics from the study show, analysis of spatial and temporal patterns reveal that methane “hotspots” are aligned with the geological features of the region rather than proximity and concentration of natural gas development. 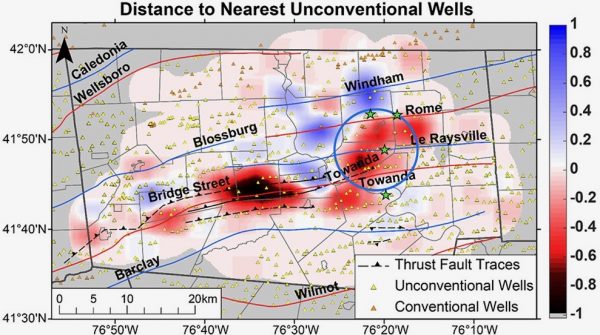 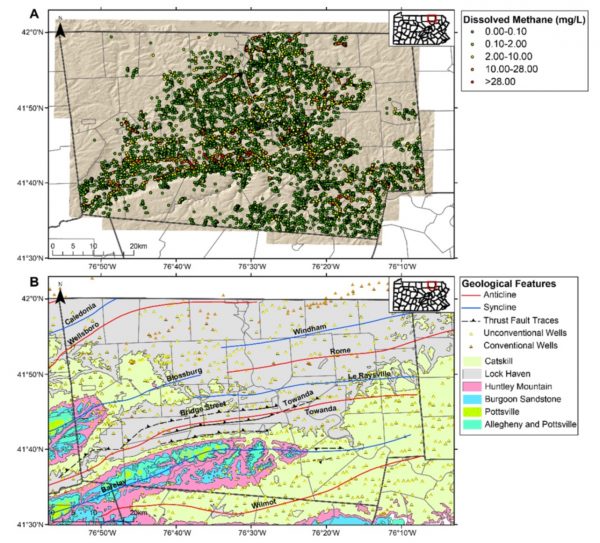 As Brantley explained in the press release:

“We look at methane in this groundwater data and we actually can see geology in the data. I can tell you where there are faults, where there are big folds in the rock based on the groundwater. Then what we look for is where the water chemistry does not look like the geology and looks like something we don’t understand. Our hypothesis is sometimes that shows you something about human activities, like shale development.”

“Using a new data mining technique, we confirm previous observations that methane concentrations in groundwater tend to be naturally elevated in valleys and near faults, but we also show that methane is also more concentrated near an anticline.”

And in yet another blow for “Keep It In the Ground” activists who have long insisted fracking is an inherent threat to groundwater, not only did the researchers conclude Bradford County water quality has likely improved since the shale gas revolution began — they also noted that increased natural gas use made possible by fracking can, perhaps, partially be credited for that improved groundwater quality by reducing acid rain. From the report:

“If groundwater is improving, likely explanations include the imposition of the Clean Air Act since the 1970s, decreases in coal mining and steel manufacture in the region, and the trend to transform power plants from coal to gas.

“… the conversion of power plants from burning coal to cleaner natural gas may contribute to the decline of contaminant emissions into the atmosphere. For example, Paulot et al. pointed out that SO2 emission has declined by over 60% in the eastern U.S. since the late 1990s. Consistent with this, Niu et al. and Raymond and Oh documented that sulfate concentrations in streams in PA steadily decreased from 1965 to 2015. Those researchers attributed the decrease largely to the decline of coal production in PA.”

This study comes on the heels of last month’s long-anticipated publication of a University of Cincinnati study finding no evidence of groundwater contamination in heavily drilled regions of neighboring Ohio. These latest university studies echo the conclusions of no fewer than two dozen scientific reports — including the EPA’s landmark five-year study — that further confirm what is becoming more and more evident: fracking is not a major threat to groundwater.