Anti-fracking activists like Gasland director Josh Fox have long used a 2013 study outlining a “roadmap” for transitioning to 100 percent renewable energy as the centerpiece of their sales pitch to the America that a radical policy — banning fracking — is actually feasible.

But that research led by Stanford University professor Mark Jacobson has sustained another head-on collision with its arch nemesis — reality —revealing again why one NASA scientist has compared the paper as “almost the equivalent of believing in the Easter Bunny and Tooth Fairy.”

A group of 21 independent experts this week issued a scathing critique of Jacobson’s “100 percent renewable” research this week in Proceedings of the National Academy of Sciences, saying the paper “used invalid modeling tools, contained modeling errors, and made implausible and inadequately supported assumptions.” The paper also states,

“The study’s numerous shortcomings and errors render it unreliable as a guide about the likely cost, technical reliability, or feasibility of a 100% wind, solar, and hydroelectric power system. It is one thing to explore the potential use of technologies in a clearly caveated hypothetical analysis; it is quite another to claim that a model using these technologies at an unprecedented scale conclusively shows the feasibility and reliability of the modeled energy system implemented by midcentury.”

This unabashed critique further confirms Jacobson’s research was suspect from the beginning and adds to the already long list of criticism that EID has highlighted before. Furthermore, EID has also previously revealed Jacobson’s plan would cause a net loss of more than 1.2 million long-term jobs – according to Jacobson’s own data. 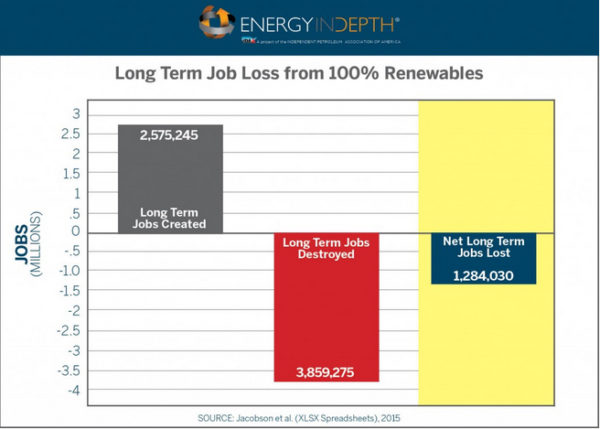 Despite these flaws, Jacobson’s research managed to garner mainstream acceptance, thanks in large part to a shrewd promotional campaign that included an appearance on The Late Show with David Letterman. Colorado gubernatorial candidate Jared Polis even announced his platform will embrace a 100 percent renewable conversion based on Jacobson’s study.

Jacobson has made no bones about the fact that his goal is to influence public policy in an effort to mandate widespread 100 percent renewable conversion. This is just one of the reasons the 21 researchers responsible for this week’s critique felt compelled to set the record straight. As co-author Jane Long, former associate director at Lawrence Livermore National Laboratory, told Technology Review,

“Energy issues are complex and hard to understand, and Mark’s simple solution attracts many who really have no way to understand the complexity. It’s consequently important to call him out.”

“We thought we had to write a peer reviewed piece to highlight some of the mistakes and have a broader discussion about what we really need to fight climate change. And we felt the only way to do it in a fair and unbiased way was to go through peer review, and have external referees vet it to make sure we’re not saying anything that’s untrue in our piece.”

Study co-author David Victor of the University of California-San Diego told The Washington Post that Jacobson’s paper contained “wildly unrealistic expectations” that would lead to “massive misallocation of resources,” adding,

“Our analysis suggests … that none of that work holds up. So I can totally understand that emotions are high, but we have a duty as scientists to call the facts as we see them.”

Specifically, the authors took issue with Jacobson’s unrealistic hydropower estimates and willful dismissal of the limitations of renewables due to their intermittent nature.

“They treat U.S. hydropower as an entirely fungible resource. Like the amount [of power] coming from a river in Washington state is available in Georgia, instantaneously.”

As Mike Shellenberger, head of the clean energy advocates at the Breakthrough Institute, noted in the following tweet, “People need to understand that (the) 100 percent renewables house of cards falls apart when you pull out the hydro-lie.”

“The debate is crucial because, while it’s great to talk about wind and solar in theory, the reality is that the electrons that they generate have to be sent through wires and transmission stations to satisfy needs at particular places and at particular times — or else, we’ll have to come up with a way of storing electricity on a large scale, which remains a mostly unsolved problem right now.

“And critics have contended that while you can add some wind and solar to the grid without any problem, if you add too much, it can be destabilizing and the electric grid will always require some so-called “baseload” sources of energy, like nuclear or coal or gas, which generate power continuously, rather than intermittently depending upon the availability of the sun or the winds.”

Predictably, Jacobson immediately accused the authors of the paper of being fossil fuel industry advocates and shills, a criticism that Clack described as “bizarre” based on the group’s wide-ranging expertise and affiliations, which include Carnegie Mellon, the Carnegie Institution for Science, the Brookings Institution and Stanford.
As the following examples illustrate, there is no shortage of evidence proving that the criticism of Jacobson’s study is anything but industry-driven.

At the end of the day, this critique of Jacobson’s work proves that the means that have been employed by the anti-fracking movement — rampant misinformation campaigns inspired by the fraudulent Gasland films — do not justify the ends — a 100 percent renewable conversion — considering the blueprint for that goal has proven false as well.