A comprehensive study released this month brings some much-needed clarity to the ongoing – and increasingly, national — discussion over methane migration in northeastern Pennsylvania.  The study, which includes an assessment of over 1,700 pre-development water samples taken in Susquehanna County, PA, offers a number of important facts, figures and general findings — including the fact that pre-drill tests found methane to be present in 78 percent of the water wells sampled.

The study also found that the source for methane in the area isn’t the Marcellus Shale, as some folks continue to suggest- it’s the thermogenic gas-charged sandstone in the Catskill Formation– the primary source for water wells in the region.  Indeed, the researchers found that the isotopic signature of thermogenic gas in the area, including  samples utilized in Duke University’s earlier study, suggest that the signature of methane is consistent with methane found in the Catskill and Upper and Middle Devonian deposits. From the piece:

The present study, however, shows that the isotopic signatures of the Duke Study’s thermogenic methane samples were more consistent with those of shallower Upper and Middle Devonian deposits overlying the Marcellus Shale.  This finding indicates that the methane samples analyzed in the Duke study could have originated entirely from shallower sources above the Marcellus that are not related to hydraulic fracturing activities.

“[M]ost water wells completed in the Catskill formation (bearing significant thermogenic gas) contain only limited grouting, and are unsealed so as to draw groundwater from multiple water-bearing horizons and-or fractures.”

The study also examined whether or not natural gas production can exacerbate these previously existing conditions leading to an increased likelihood of methane intrusion in this area and others.   The study split its data into two sets including those located in “gas producing areas” (within 1 km of natural gas operation developed prior to 2011) and those in “non-production areas” (no wells developed within 1km prior to study).  In comparing these samples the study found:

The studies observations seem to confirm findings of a November 2011 study conducted by the Center for Rural Pennsylvania which found no significant relationship of methane concentrations in water wells and correlated distance from natural gas production operations.

Adding to all of this the study also examined historical data regarding methane’s presence in water in the region. In reviewing over 200 years of records the study found that methane  has been present in the area in significant quantities long before natural gas development began- dating as far back as the 1800’s. 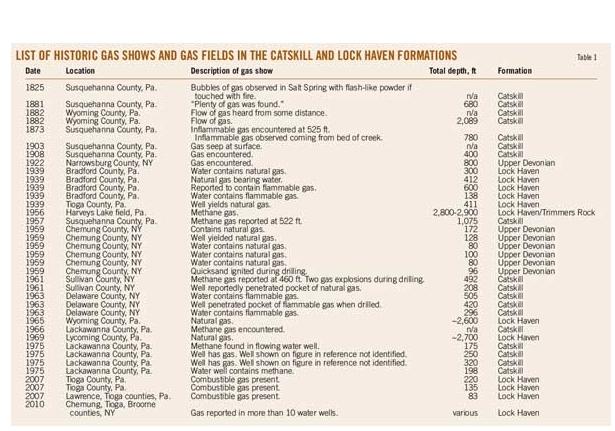 The study paints a well researched picture that methane in the area is in no way associated with natural gas production but instead is a natural part of the sandstone aquifer, and immediately underlying rock strata, which are highly charged with methane, filled with natural fractures aiding its quick passage,  and are interspersed with many water wells that “lack proper sealing and casing” thus enabling migration.

The study did make one very important correlation; namely, that methane’s presence in water wells in the region correlates strongly to topography.  In fact, the study found “a clear relationship with surface topography, with measurably higher dissolved methane concentrations in water wells located in valleys relative to upland areas”.  This was evident in the break-down of samples collected for the study.  While only 51 percent of the samples obtained with methane came from wells in a valley setting, approximately 88 percent of well samples containing dissolved methane  concentration in excess of 7,000ppb (current action level established by PA DEP) were located in low lying areas.

These results are supported by historical data as well.  Testimony from water well developers  in Susquehanna County note that water wells with gas shows are most commonly observed in valleys.  In addition, similar conditions were observed in a study conducted by the U.S. Geological Survey in West Virginia in 1997-2005 where data showed significant methane concentrations existed only in wells locate in valley or hillsides as opposed to those found on hilltops.

This critical info likely won’t deter future attempts by folks likes of Josh Fox and Mark Ruffalo  to blame all methane in water on hydraulic fracturing.  But it will go a long way in helping the residents of Pennsylvania understand the unique factors of their geology hopefully leading to the development of suggested standards in the proper construction and maintenance of private water wells.