Natural gas will play a major role in the U.S. power market and wider economy through 2040, according to a new study from the Interstate Natural Gas Association of America (INGAA) Foundation.

The study, The Role of Natural Gas in the Transition to a Lower-Carbon Economy, examines the role natural gas will play in two likely scenarios of energy sector evolution in the United States from 2020 to 2040, finding that in both the “Balanced Future,” and the “Rapid Renewables Transition,” natural gas is highly likely to remain an important component of the U.S. energy mix. 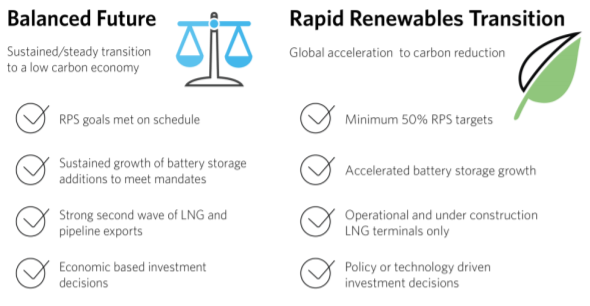 Due to solar and wind’s variable output, the grid will require “flexible, fast-ramping generation or energy storage.” Economically viable energy storage technology isn’t here yet, but flexible, fast-ramping natural gas generation technology is readily available. Because economically viable large-scale battery technologies are unlikely to emerge until nearly 2040 at the earliest, natural gas will be key to facilitating the emergence of complementary renewable power resources, the report states.

“Natural gas fired generation will allow an increasing amount of renewable energy in the electric generation portfolio by providing electric grid reliability in the form of load… backup power, frequency regulation, and spinning reserves. Battery storage at scale will be able to provide some of these services; current battery technologies, however, do not support the full range of flexibility needed, including for seasonal and daily variations, and therefore cannot displace natural gas fired generation, which is uniquely suited to mitigate this variability.”

Regardless of whether energy policies align closer to the “Balanced Future” or “Rapid Renewables Transition” models used in the study, the INGAA Foundation expects natural gas demand to continue to rise through 2040.

Increased infrastructure will be needed to meet rising demand.

Efficient deployment of natural gas and renewables alongside one another remains a challenge if insufficient pipeline capacity restricts natural gas supplies where they are needed. Even in the Rapid Renewables Transition scenario, natural gas will not be able to fulfill its emission-reducing potential without pipeline capacity beyond that which is both currently available and proposed. This is especially true in the Appalachian region, home to the Utica and Marcellus shale basins. 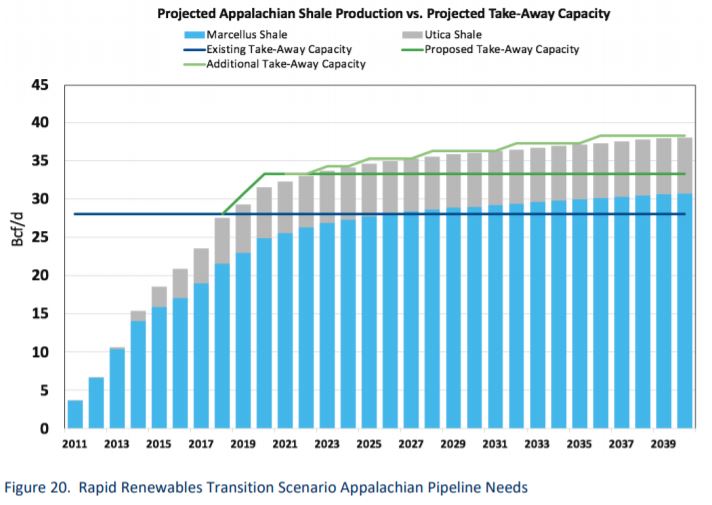 “Rising demand and production levels could spur the need for up to 21 billion cubic feet per day (Bcf/d) of new gas pipeline infrastructure to support… the reliability of the power generation sector” and other needs under both scenarios, according to the study.

Because of rising shale gas production in the Appalachian, Permian and Haynesville shale patches, increased pipeline and storage infrastructure will be needed to transport natural gas to various markets.

The shortage of that U.S. pipeline capacity is well-known and already having serious impacts on consumers. New England residents know full well that extra pipeline capacity would save them from having to import expensive LNG from Russia in the winter. And let’s not forget that baby seals and polar bears were definitely harmed in the making of Russian LNG; don’t take our word for it, take it from The Boston Globe. The same can’t be said of clean-burning Appalachian natural gas, or American LNG, for that matter.

Activists are fighting these obvious benefits.

Some environmentalists still refuse to acknowledge the climate benefits natural gas can provide for our country and the world, and instead block pipeline developments at every conceivable turn with a mix of bad PR stunts, messy protests, and frivolous lawsuits that often end up getting tossed out of court while costing taxpayers millions. Others – including some 2020 presidential candidates – call for keep-it-in-the-ground energy policies and expansions of renewable energy without incorporating natural gas, which would be a more economically feasible, efficient, and climate-friendly solution in the near term.

Across the pond, activist groups like Food & Water Watch Europe would rather advocate against natural gas at a time when the United States can supply LNG from more environmentally friendly production sites than other exporting countries, like Russia, which also uses its role as an energy producer to politically bully some European nations. The group has also called for ending the use of natural gas in the EU within 10 to 30 years, a completely unrealistic goal. Instead, the EU should take a page from the U.S. playbook – the one that has made our country the world’s leader in emissions reductions – and make smart use of American natural gas.