A group of researchers from the University of Pittsburgh, West Virginia University and Texas Tech University have recently released a new study charging that current setback distances in Pennsylvania, Colorado and Texas “cannot be considered sufficient in all cases.”

Now, the anti-fracking echo-chamber is ramping up in Pennsylvania to push the study: as the Pittsburgh Post-Gazette reports,

“Patrice Tomcik, a field organizer for Moms Clean Air Force, delivered a copy of the study to DEP spokesman John Poister, who attended the news conference. She said it ‘supports what moms living in the shale fields have known for a long time: Our children, who are a vulnerable population, are not adequately protected from the hazards of unconventional wells with the current setbacks.’”

But what the Pittsburgh Post-Gazette didn’t mention is that the authors of the study are closely linked to anti-fracking groups and the “research” relies heavily on a number of studies that have been thoroughly debunked.

The paper acknowledges that lead author Dr. Anne Epstein “previously received travel expenses for a lecture given in Mansfield, Texas, on the health and environmental impacts of fracking” – but there’s is a lot more to the story.

Epstein traveled to Mansfield at the behest of the local anti-fracking activist group, Downwinders at Risk. As the Fort Worth Weekly reported, Epstein’s presentation was even heralded by national ban-fracking groups including the Sierra Club, which opposes natural gas drilling. From the Fort Worth Weekly:

“Epstein’s presentation was videotaped and posted all over the web, including on the Sierra Club’s page and dozens of environmental sites.”

Epstein also helped to organize and spoke at an anti-fracking workshop in Dallas that presented panels such as “DFW Toxicology,” “How to Get Better Media Coverage,” Do-It-Yourself Environmental Sampling,” “Documenting a violation and make it Stick” and “The Medical Case Against Fracking.” That event was promoted on anti-fracking activist Sharon Wilson’s blog under the title, “Get Smart Before the Fracking Reaper Gets You,” and this picture: 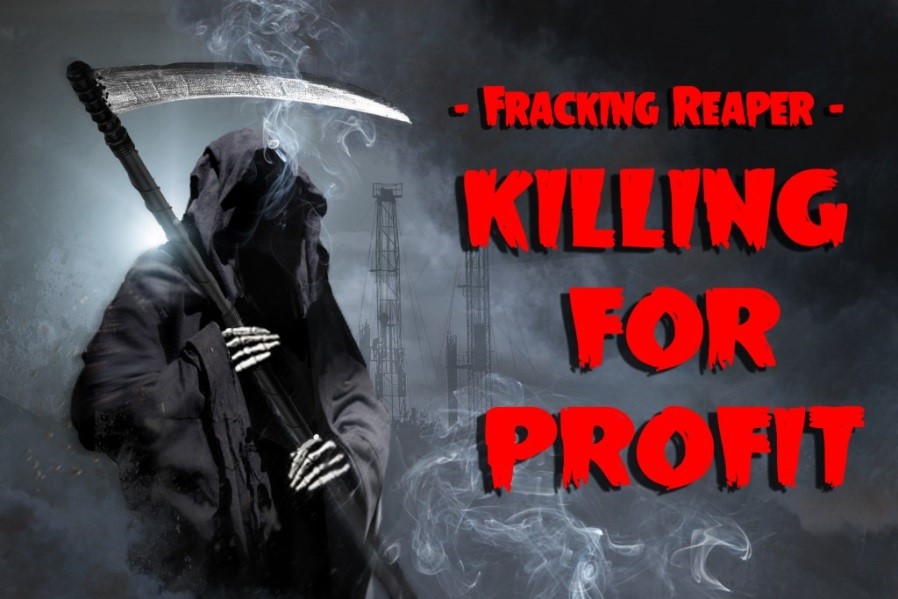 It should also be noted that Epstein is a member of the City of Lubbock, TX Board of Health, which has recommended a setback of 1,500 feet – exactly the same distance that established a “de facto ban” in Dallas.

Another author, Bob Arrington discloses that while retired, he sits on the Board of Directors at the Western Colorado Congress (WCC). From the paper:

“He serves on the Board of Directors of Western Colorado Congress, a nonprofit alliance for community empowerment to protect and enhance quality of life in Western Colorado.”

While WCC may do all of those things, Arrington failed to disclose that WCC also has a long history of opposing energy development. In September 2011, the WCC, Food & Water Watch and more than 50 other activist groups “flooded White House phone lines” and “called on [President] Obama to ban fracking,” according to a press release from the activists.

If that is not enough, WCC advocates for increased setbacks and even proudly touts their close association with the anti-fracking Bucket Brigade and Gasland’s Josh Fox.

Doesn’t sound like a group of unbiased researchers, does it?

Much of the basis for the conclusions of this latest paper rests on the idea that proximity to oil and gas development is negatively impacting public health. While an abundance of research exists that says otherwise, the group picked through many of the anti-fracking movement’s favorite studies to support their conclusions.

The work of Lisa McKenzie of the Colorado School of Public Health (CSPH) is cited by the Epstein team. From the paper:

“Residents living within one half mile of an unconventional gas well were found to have an increased risk of neurological and respiratory health effects than residents living greater than ½ mile away. The risk of cancer was increased in these residents as well, with benzene and ethylbenzene as the primary hydrocarbon contributors (McKenzie et al. 2012).”

But both of these studies have been thoroughly discredited.

McKenzie et al. 2012 – The CSPH team of researchers, are famous within the activist communityfor claiming that people who live within a half-mile of a natural gas wells may have an increased lifetime cancer risk. That 2012 study – which didn’t actually show any meaningful increase in cancer rates – has become a frequent talking point for anti-energy activists. It was even cited in a celebrity “ban fracking” video targeting Colorado Gov. John Hickenlooper.

Yet as EID has highlighted many times, McKenzie and team relied on out-of-date emission data and even inflated exposure times by 900 percent to reach their conclusion. In response to concerns about air quality, the Colorado Department of Public Health and Environment (CDPHE) installed air quality monitors at well sites.  After collecting data from these monitors, CDPHE concluded that “[t]he concentrations of various compounds are comparatively low and are not likely to raise significant health issues of concern.”

McKenzie et al. 2014– Another paper frequently cited by “ban fracking” groups suggests an increase in congenital heart disease among babies born near oil and gas well sites. But Dr. Larry Wolk, the Chief Medical Officer for the Colorado Department of Public Health and Environment (the agency from which the data was sourced for the research), disavowed those claims, saying that “a reader of the study could easily be misled to become overly concerned.” Wolk added: “I would tell pregnant women and mothers who live, or who at-the-time-of-their-pregnancy lived, in proximity to a gas well not to rely on this study as an explanation of why one of their children might have had a birth defect.” A follow-up investigation by Colorado health officials revealed there was no link between drilling and fetal abnormalities. Nonetheless, the paper used that claim to suggest that “proximity to natural gas wells represents a threat to public health.”

Epstein and her team of researchers also draw from the New York State Department of Health report that led to New York Governor Andrew Cuomo’s (D) decision to ban fracking in the state. From the study:

“Also in 2014, the New York State Department of Health (DOH) published the results of a Public Health Review process. In preparing the Review, the DOH reviewed and evaluated scientific literature; obtained input from outside public health expert consultants; engaged in field visits and discussions with health and environmental authorities in states with hydraulic fracturing activity; and communicated with multiple local, state, federal, international, academic, environmental, and public health stakeholders. The DOH report concluded that hydraulic fracturing activity has resulted in environmental impacts that are potentially adverse to public health (New York State Department of Health 2014).”

But a recent EID whitepaper detailed the massive influence anti-fracking activists have exerted on the “science” behind the New York fracking ban, finding strong evidence of political pressure from a well-funded, well-organized network of foundations and activist groups opposed to shale development in New York.

That EID investigation found that much of the evidence cited by the NY DOH included research that was financed and produced almost entirely by anti-fracking activist groups. EID even found that in some cases studies were written and peer reviewed by researchers who concealed their bias, including leading New York anti-fracking activist Sandra Steingraber. Additionally, the same group of foundations funding the research also had strong financial ties to the media outlets that promoted the research and the “ban fracking” campaign groups that used the research to lobby the Cuomo administration.

Epstein and her team also cite a study from researchers from Yale, the University of Washington, and Colorado State University. From the report:

This study sought to correlate skin and respiratory issues with proximity to oil and gas development. But an EID review of the research found that this report is the result of data collected by an activist group who paid individuals to give complete surveys on health symptoms.

Even more troublesome for Epstein and her team is the fact that the researchers were forced to walk back their conclusions after serious issues were raised with their research.  As the New Haven Register reported,

“The study does not claim that the wells cause the health problems, which requires further investigation to determine.

‘It’s more of an association than a causation,’ Rabinowitz said. ‘We want to make sure people know it’s a preliminary study. … To me it strongly indicates the need to further investigate the situation and not ignore it.’”

Further, it should also be noted that a great deal of research exists showing that emissions associated with oil and gas development are not reaching levels that impact human health. State regulatory agencies in Colorado, Texas, Pennsylvania, and West Virginia have looked at emissions from well pads and concluded that they are below public health thresholds, and that available technologies are being used to minimize emissions. In fact, the Pennsylvania Department of Environmental Protection found that increased use of natural gas has actually prevented the release of 500 million tons of air pollutants.

Gets the facts wrong on Texas setbacks

It should also be pointed out that the researchers made some erroneous claims about recent Texas legislation. From the report:

“Recently, the state of Texas passed into law H.B. No. 40, which preempts regulation of oil and gas operations by municipalities (Texas State Capitol 2015); therefore all sites will presumably be required to conform to state law – even those such as the city of Denton, which had previously banned hydraulic fracturing entirely.”

Yet in the context of setbacks, Texas H.B. No. 40 explicitly grants local governments the authority to set “reasonable” setback distances. As the Dallas Business Journal reports:

“The biggest issue when companies drill and frack in cities and suburbs is setbacks, how near can the well site be to homes, schools and businesses.”

This paper comes at a time when activist organizations are increasingly setting their sights on large setbacks as the way to ban oil and gas development altogether. In fact, the researchers themselves all but call on citizens to lobby their legislatures to adopt increased setbacks. From the report:

“There is an increasing awareness of the multiple potential pathways leading to human health risks from hydraulic fracturing. Setback distances are a legislative method to mitigate potential risks.”

“Texas, Pennsylvania, and Colorado should consider adopting more generous setback distances, particularly in reference to vulnerable populations; however, distance is not an absolute measure of protection. Unfortunately, there is no defined setback distance that assures safety.”

That should come as no surprise. But this report does little to bolster their case given the anti-fracking backgrounds of the researchers and the fact that they relied on the most dubious research possible to reach their conclusions.