Childhood leukemia is a subject dear to my heart because it’s happened in my own family.  I’m pleased to say we had a good outcome in our case, but it made me keenly attentive to the subject and I vividly recall the words of the specialist when we asked what might have prompted the disease.  He was emphatic about the lack of ability to target a cause and I’m pleased to say a new study supports his view with respect to the impact of oil and gas operations on childhood cancer rates.

Researchers from the EpidStat Institute and David Garabrant PLLC recently concluded a study comparing childhood cancer rates in Pennsylvania counties before and after oil and natural gas operations. The results, in the authors’ words, “offer comfort concerning health effects of [hydraulic fracturing] on childhood cancers.” The study itself, available for purchase at the website linked, also offers the following additional statements:

Analyses by the number of wells in the county and by well type for all cancers, leukemia, and [central nervous system] CNS tumors were unremarkable.

Although it is difficult to draw etiological inferences from county-level data, the results of this study are comforting because they suggest that the incidence of childhood cancer, childhood leukemia, or childhood CNS tumors did not increase after [drilling and hydraulic fracturing].

Regardless, we found no evidence that childhood leukemia was elevated in any county after [hydraulic fracturing] HF commenced. In fact, those counties that were most impacted by HF activities had a similar number of total cancer cases and a reduced, not statistically significant number of leukemia cases after drilling compared with the period of time before drilling.

Now before we get much further, it should be made known the study was funded by America’s Natural Gas Alliance (ANGA), which some opposed to natural gas development may find unnerving. It has been independently peer reviewed, though, and no conflicts of interest were claimed by the authors. Moreover, it’s yet another health study demonstrating hydraulic fracturing isn’t a risk to public health and would have had the same results regardless of what entity funded the research.

So, what did the study do? It sought to “evaluate whether childhood cancer incidence is associated with counties with hydraulic fracturing (HF),” by looking at counties that have natural gas development activity, both before and after it occurred.

The results were good on all accounts, showing no difference in standard incidence rates (SIRs) in counties prior to or after hydraulic fracturing had occurred. From the abstract (emphasis added):

Table 3 from the study includes data I used to assemble the following chart, which tells all: 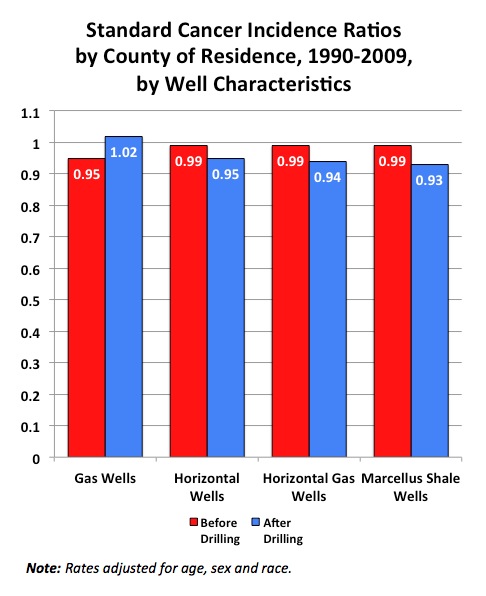 This is in direct contrast with claims made by Gasland director, Josh Fox, and a Colorado study issued earlier this year which made claims, “that people living within a half-mile of an oil or gas well have a 66 percent higher chance of getting cancer.” Such claims and others are addressed in this latest study, which demonstrates why the data behind them is flawed and/or superficial.  Very often, the data is either highly selective or explainable by other factors, a frequent problem with the health studies hyped up by opponents of natural gas development to grab quick headlines.  This latest study is peer-reviewed and lays out facts establishing there is no evidence of the potential cancer issues others have proclaimed.

I am cautious with all data and my experience tells me we always need to be digging for facts and investigating possibilities, but this study demonstrates we don’t have to run around shouting that the sky is falling either.  We do not live in a risk-free world and can’t.  Our duty is to continually assess and manage risk as we move forward.  Doing nothing out of fear of doing something, over a risk for which there is no evidence, is not an option for anyone looking rationally at our energy or health needs.

This study and, I hope, others to follow, will contribute to the development of a knowledge base from which we can all improve the way we do things and the quality of our lives. This is the approach that has continually improved the survival rates from childhood leukemia, a fact that was so comforting when our family got the word some eight years ago.  The optimism given to us at that moment proved justified.  I’m still optimistic, about both cancer and natural gas development. This study just helped – a lot.