This week, in the first of an ongoing series discussing oil and natural gas development with industry leaders, elected officials and experts, Energy In Depth interviewed U.S. Representative and Subcommittee on Energy Chairman Fred Upton (MI-06). 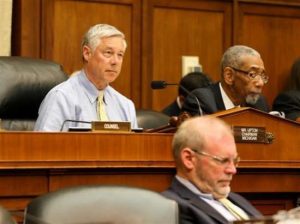 Earlier this summer, you held a hearing in the Subcommittee on Energy –“The Shifting Geopolitics of Oil and Gas”. What kind of changes, or “shift” have you seen?

Rep. Upton: In 2005, our country’s domestic oil and gas production was steadily declining while our reliance on foreign energy sources soared. At the time, we were importing eight times more energy than we were exporting. We were at risk of becoming increasingly beholden to OPEC nations for our energy needs.

I’m pleased to see the American energy industry make leaps and bounds in production. In the time since then, we’ve seen important technological breakthroughs pioneered by American companies, namely horizontal drilling and hydraulic fracturing, dramatically alter our energy outlook. These technological breakthroughs led to a surge in domestic oil and gas production, decreasing U.S. reliance on energy imports. So much so, in fact, the Energy Information Administration projects that by 2022, the United States will become a net energy exporter for the first time in over half a century.

It is clear to me that we are in the midst of an American energy revolution. Creating jobs, boosting our economy, and decreasing our reliance on foreign sources of energy — this is great news. As the United States continues to grow as a leading energy producer, you can be sure I will be at the front to lead the charge.

On oil, and liquefied natural gas (LNG) exports in particular, this was something you fought for – the ability for the U.S. to export its energy resources. Why is this ability to move in the global market so important?

Rep. Upton: American liquefied natural gas exports are important on several levels. U.S. LNG exports are primarily a positive factor in our trade and diplomatic interactions with many other nations. American LNG reaches markets in up to 26 countries, including Brazil, China, Britain and the United Arab Emirates.

Continued production promises continued investment and prospects for growth. It was once assumed that we would be an importing nation, not an exporting one. It’s consistent with the goal of securing our energy independence and stimulating our economy, LNG exports have clearly proven their worth as an American asset.

Where do you see the future of LNG exports? What, in your estimation, is the next step?

Rep. Upton: LNGs already show great promise as an export commodity. Although production and export capacity has been projected to increase from 3.1 Bcf/d to 6.9 Bcf/d within the next five years, there are certain steps that we should take to guarantee this growth.

Namely, I believe that encouraging investments through small-scale LNG operations will be critical as the next step in the near future. Diversifying LNG terminal locations will reinforce production numbers and keep American LNG prices low and competitive.

The United States is set to become the leading producer of crude oil, surpassing Saudi Arabia. Natural gas production is again setting records this year. What steps do we need to take to ensure continued success in the future?

Rep. Upton: As you know, our dependence on foreign energy sources in the past has been unsustainable.

Our nation’s security cannot be bartered away. The national and energy security benefits provided by the shale energy revolution cannot be overstated. Every day we are less dependent on foreign nations and cartels, such as OPEC, to meet our domestic energy needs.

We need to maintain our country’s influence, reduce our trade deficit, and sustain our economic growth. To do that, we need to continue to take steps to bolster the American energy revolution.

Here in Congress we passed common-sense legislation that lifted the restrictions that have been stifling our competitiveness. An environment that encourages new techniques, builds stronger infrastructure, and nurtures American ingenuity will be pivotal for our nation’s continued success.

Next week, your Subcommittee is holding a hearing on energy storage. What are you looking to learn, and why is this of importance to you and the Energy and Commerce Committee?

Rep. Upton: We recognize the importance of energy storage. As demand rises in both domestic and international markets, we must be ready with the proper techniques, facilities and know-how to store our energy supplies.

We’re interested in determining the course of our current practices and how we can improve. Better storage practices will ultimately help us smooth out variabilities between supply and demand. I’m looking forward to taking part in our hearing next week to learn more about the challenges and goals of energy storage.

Where do you see your focus moving towards next? Are there issues or challenges you’d like to address?

Rep. Upton: One of my top priorities will be improving our energy security – specifically the threat of an attack on our energy infrastructure. Congress must act swiftly by providing DOE with the tools it needs to enhance preparedness and protections of our energy systems.

This is why I introduced the Pipeline and LNG Facility Cybersecurity Preparedness Act to address this issue. This legislation requires the Secretary of Energy to establish a program to improve cooperation between federal agencies, states, and industry to ensure the safe and dependable flow of energy across the United States. This will help boost physical security and cybersecurity of energy pipelines and liquefied natural gas facilities.

Other legislation passed by the committee includes the Energy Emergency Leadership Act, the Cyber Sense Act, and the Enhancing Grid Security through Public-Private Partnerships Act. All of these bipartisan measures take practical steps to ensure that DOE can effectively carry out its emergency and security duties.

Back to your previous hearing. You brought in Daniel Yergin – a world renowned energy expert. What’s your reaction to his testimony?

Rep. Upton: Overall, Mr. Yergin’s testimony was a wealth of information and guidance. However, what really stuck out to me were his comments on the overall economic benefits the energy boom has brought.

I was impressed to hear that the full unconventional value chain associated with natural gas and oil has yielded $75 billion in federal and state tax revenues, supported more than two million jobs, and brought up U.S. GDP by $283 billion.

The “major economic stimulus” Mr. Yergin describes has been most welcoming of all. Families across the Midwest have benefitted greatly from oil and gas exploration and investment.

Finally, you discussed earlier the remarkable shift we’ve seen with U.S. energy production since 2005. Given the vast amount of energy we’re producing, and with what’s in the Strategic Petroleum Reserve, do you see any opportunity for Harbaugh’s Wolverines to summon enough energy to win in Columbus against Ohio State? By my calculations, Michigan has only been able to muster one win in thirteen chances, and none since you got your new coach…

Rep. Upton: Coach Harbaugh has the most energy of anyone I’ve ever met. I don’t know if he needs anymore… Either way, I have the utmost confidence that when my Wolverines march into the Horseshoe this fall, they will emerge victorious. Go Blue!