In recent years, critics of U.S. oil and gas development have pushed for regulations establishing more separation between drilling sites and local structures, such as buildings or residential areas. Environmental groups often claim these rules are simply designed for a better overall regulatory structure, but a closer examination suggests that the real goal is to ban drilling altogether.

The allowable distances between well sites and established structures — also called setbacks — vary by region. But as U.S. oil and gas production has increased significantly over the past few years, many activist groups have adopted new tactics to try to limit development in any manner possible. That includes making it nearly impossible to operate through overly restrictive local ordinances, such as abnormally large setbacks.

The situation is the most pronounced in the Barnett Shale of north Texas, where environmentalists have claimed certain setbacks are necessary to protect public health, even as industry operations have occurred safely in other parts of the region with setbacks that are far less than the distances that many activists claim are required.

In the city of Fort Worth, which houses more than 1,000 wells, the setback is 600 feet. A major air quality study conducted for the city in 2011 – around the time when Barnett Shale gas production was at its highest point – concluded that “Fort Worth’s 600-foot setback distance is adequate” to protect public health. The available data also “did not reveal any significant health threats,” according to the study.

Despite those findings, critics have lobbied other cities throughout the Metroplex to adopt stricter ordinances that increase setbacks to more than twice the distance allowed in Fort Worth.

In 2011, Flower Mound adopted a 1,500 foot setback that won praise from Earthworks, a group that opposes fracking and was the chief funder of the campaign to ban drilling in Denton. After the Flower Mound ordinance was approved, the Dallas Morning News wrote that it’s “unclear how many new gas wells will be drilled in Flower Mound under the new rules.”

Similarly, the city of Southlake adopted a setback of 1,000 feet in 2011, or about 67 percent farther than what’s allowed in Fort Worth. The Fort Worth Star-Telegram observed that “setbacks have always been the most controversial item because it determines whether drilling can occur in the city at all.”

Last year, when Dallas adopted its new drilling ordinance, the language contained a 1,500 foot setback, meaning each new well site would require a buffer zone that’s nearly one million square feet larger than the acreage of AT&T Stadium and its associated parking lot. Earthworks celebrated the setback as a “de facto drilling ban,” and the Texas Observer called it a “victory for fracking opponents.” The Natural Resources Defense Council – an organization that supports a moratorium on fracking – also cheered passage of the ordinance. 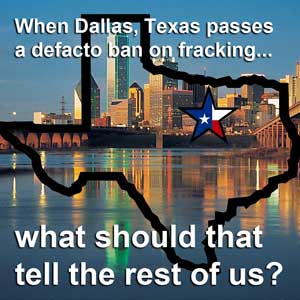 Earthworks celebrates a 1,500-foot setback in the Dallas drilling ordinance as a “de facto ban” on oil and gas development. Image source: Earthworks

The Dallas Gas Drilling Task Force, which had been established to help craft the city’s new drilling ordinance, noted in a May 2012 memo that it heavily leveraged the restrictive setbacks in other Metroplex communities, admitting there were “numerous recommendations made based upon Southlake and Flower Mound ordinances.”

Shorter setback distances have also been described by drilling critics as effective bans on drilling. A few weeks after the city of Denton voted to ban fracking, two of the local activists admitted that the city’s 1,200 foot setback was already a “de facto” ban — which is why they supported it. In a piece entitled “How Denton beat the frackers,” the activists wrote:

For about a year, the city managed to stall the task force, until a weak ordinance was finally submitted to the planning and zoning commission. By the time the proposed ordinance hit the City Council in 2011, Occupy Denton, then at its peak, helped galvanize grassroots activists, who organized and won a moratorium on fracking permits in the city, while a revised ordinance was put together.

The meetings where public comments were allowed were always attended by at least 20 anti-fracking activists, and DAG and Denton Off Fossil Fuels (DOFF) maintained a presence, while trying to figure out how to propose our own ordinance. In fact, DOFF debated whether to propose a full ban or a “de facto” ban–by proposing setbacks of 1,200 feet.

Eventually, people agreed with a “de facto” ban, though a full ban was still on the minds of some. Activists began working to craft a stronger ordinance with setbacks of at least 1,200 feet, air and water quality testing, and requirements for drillers to purchase more insurance in the event of accidents. (emphasis added)

To the south, activists in College Station have gone even further, calling for a “minimal setback of at least 1/2 mile.” The same group — Protect Brazos County, Texas — lists “a petition to ban fracking within City limits” as part of its “What you can do” page.

Mansfield the Next Target

Drilling critics are now flooding into the city of Mansfield – located a few miles south of Arlington, Tex. – and using these “de facto bans” as momentum to try to change the local ordinance. Mansfield’s current setback is 600 feet, the same as Fort Worth’s.

As described in a recent story in Fort Worth Weekly, a local organization recently “worked with Jim Schermbeck, director of Downwinders at Risk, to bring Dr. Ann Epstein to talk to Mansfield residents” about drilling. Epstein is a member of the City of Lubbock Board of Health, which has recommended a setback of 1,500 feet – exactly the same distance that established a “de facto ban” in Dallas. Epstein has said, however, that the Board “is not trying to ban fracking.” The Sierra Club — a major environmental group headquartered in San Francisco, and which opposes natural gas drilling — promoted Epstein’s presentation on its website.

Epstein has also cited research from Colorado– referenced often by “ban fracking” groups — that suggested an increase in congenital heart disease among babies born near oil and gas well sites. Dr. Larry Wolk, the Chief Medical Officer for the Colorado Department of Public Health and Environment (the agency from which the data were pulled for the research Epstein cited), disavowed those claims, saying that “a reader of the study could easily be misled to become overly concerned.” Wolk added: “I would tell pregnant women and mothers who live, or who at-the-time-of-their-pregnancy lived, in proximity to a gas well not to rely on this study as an explanation of why one of their children might have had a birth defect.” A followup investigation by Colorado health officials revealed there was no link between drilling and fetal abnormalities. Nonetheless, Epstein used that claim to suggest that “proximity to natural gas wells represents a threat to public health.”

In a presentation to the Lubbock Board of Health, Dr. Anne Epstein cites research linking fetal abnormalities to nearby oil and gas drilling as justification to increase setbacks. The data for that research came from the Colorado Department of Public Health and Environment, which disavowed the findings and found no such link.

Recently, Epstein submitted a minority report from the Oil and Gas Citizen Advisory Committee to the Lubbock city council, which also called for increased setbacks. Lubbock’s mayor, Glen Robertson, said of the report’s findings: “I think their data is flawed,” observing that the authors “gathered data in areas outside of Lubbock” as a means of influencing the debate inside the city.

Downwinders at Risk, meanwhile, has played an “instrumental” role in stopping drilling throughout the Barnett Shale region, according to Fort Worth Weekly:

“The Downwinders have been instrumental in helping cities like Dallas and Southlake to write drilling ordinances with setbacks large enough to seriously limit well development.” (emphasis added)

Last month, Downwinders observed that the push for a ban in Denton meant “it’ll be a tough slog for any company that wants to drill a new gas well in town.” After the Denton fracking ban passed, Downwinders called it a “successful citizens revolt,” before turning its attention southward: “The next organized front in the battle over urban gas drilling in DFW is the Fort Worth suburb of Mansfield,” Jim Schermbeck wrote on November 26th. A December 5th blog post from Downwinders also celebrated what it deemed “momentum” in Mansfield for increasing the setback distance to 1,500 feet.

Perhaps unaware of the impetus behind the “de facto” bans, Mansfield Gas Well Awareness — which told the local ABC News affiliate “we’re not advocating a ban” — stated recently that the city “deserves the same level of protection afforded other cities like Dish, Dallas, Denton, and Flower Mound.” In addition to Denton’s 1,200 foot setback that has been celebrated by activists as a de facto ban, and the prohibitive drilling ordinance in Dallas, at least one supporter of the campaign to ban fracking in Denton described that effort as an attempt to “ban industry altogether.”

If critics of development want to ban drilling, then why don’t they just say so? The answer, in a word, is politics.

Polls consistently show the American public strongly supports increased U.S. energy development, making campaigns to ban drilling an uphill climb at best. But environmental activists can still achieve “de facto” bans through different means, including setbacks and other measures that can be sold not as outright bans, but more moderate things like “protecting health” or “closing loopholes.”

In Denton, the local anti-fracking campaign tried to distance itself from advocating for an all-out drilling ban, stating on its website that its ballot measure to ban fracking “does not prohibit gas drilling in Denton,” and that “a prohibition on hydraulic fracturing is not a ban on gas drilling.” The activists’ stated concerns, however, had more to do with drilling than the specific “fracking” process, and the Texas Supreme Court has stated at least twice that fracking is required for development in the Barnett Shale. Similarly, before the Dallas de facto ban was finalized, city officials told the New York Times that they had “no intention of banning drilling” with their ordinance.

The only problem, of course, is that if an ordinance effectively condemns any new drilling, then the regulatory approach is a distinction without a difference. Many of the activists throughout north Texas recognize that, and they desperately hope other residents don’t.