A case of flammable water that anti-fracking groups have used to foment doubt about the safety of shale development was not due to oil and gas drilling, Texas state regulators concluded in a report released today. This marks the second time that regulators have investigated the case of methane in private water wells and found no link to drilling or fracking.

“Based on this information,” the Railroad Commission concluded, “it appears that the complainants’ water wells either penetrate into or beneath the transitional zone that separates the Cretaceous Twin Mountains Aquifer and the underlying Pennsylvania Strawn formation, with the exception of Well No. 8A which was set at a total depth of 120 feet and Well No. 11 for which water well construction information was not available.”

“The occurrence of natural gas in the complainants’ water wells may be attributed to natural migration of gas from the shallow Strawn Formation, exacerbated by water well construction practices whereby some water wells have penetrated ‘red beds’ in the transition interval between the aquifer and the Strawn Formation. Contribution of natural gas to the aquifer by the nearby Barnett Shale gas production wells is not indicated by the physical evidence…” (p. 11; emphasis added)

Given these facts, the Commission “determined that the evidence is insufficient to conclude that Barnet Shale production activities have caused or contributed to methane contamination in the aquifer beneath the neighborhood.”

The case became a national story in 2010 when Al Armendariz, then administrator of the U.S. Environmental Protection Agency’s Region 6 office in north Texas, issued an “endangerment order” against Range Resources for allegedly contaminating water supplies as part of its gas drilling operations in Parker County. The order received immediate pushback from state regulators at the Railroad Commission, who contended that the EPA had not properly or thoroughly investigated the source of the methane. A few months after the order, the Railroad Commission was proven right when extensive testing — including a specific nitrogen fingerprinting analysis that the EPA knew about but refused to conduct — showed conclusively that the methane levels were not caused by Range’s activities, and matched the composition of shallower methane sources, from which Range was not producing.

The New York Times covered the case in 2011, when emails revealed a carefully concocted “strategy” by anti-fracking activists to get the EPA to intervene. Part of that strategy, according to a state district judge, was to create a “deceptive video” that was “calculated to alarm the public into believing the [landowner’s] water was burning.” The video was of a man lighting the end of a garden hose, although the hose was actually connected to a gas vent, not the water line. Pictures of another water well in the region — taken in 2005, years before drilling began — also showed how methane had long been known to be present in local water supplies. 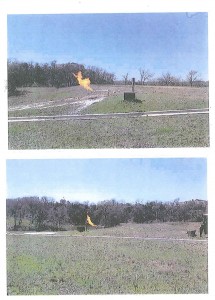 Armendariz, then the EPA administrator, famously thanked the activists for educating him about gas drilling issues in an email in which he tipped them off to the endangerment order before it had become public. After video surfaced in 2012 of Armendariz telling an audience that his method of regulating oil and gas development was similar to how the Romans used to “crucify” villagers they had conquered, he was forced to resign. Armendariz began working at the anti-fracking Sierra Club two months later.

However, the “flaming hose” video had staying power, even long after it was revealed to be a stunt by anti-fracking groups that had nothing to do with drilling. It even drew the attention of Gasland filmmaker Josh Fox, who embarrassingly made the “flaming hose” the emblematic scene of his second movie, Gasland Part II.

Given the prevalence of water wells drilled into gas-bearing formations, the Railroad Commission recommends that landowners in the area “ventilate and aerate their water systems” to prevent methane from accumulating.

*NOTE: A comprehensive fact-sheet on the Parker County case can be found here.