Drivers have a big reason to celebrate this weekend: Americans will pay the lowest gas prices over the Memorial Day holiday in over a decade according to AAA. As we head into the summer driving season, we are reminded how U.S. consumers are taking full advantage of the U.S. shale revolution that continues to bring lower energy costs for American families. AAA notes that more than half of Americans say low gas prices are the reason they will travel this summer. In other words, families will save money while sharing experiences with friends and loved ones thanks to American-made innovation, ingenuity and a commitment to our energy abundance.

Increasing production has caused the U.S. to import less from Saudi Arabia and other countries, leading to more supply on the global market that in turn has driven prices down and lowered the price at the pump. American Petroleum Institute (API) Chief Eric Bowman stated, “With the right policies in place, our energy revolution can endure for decades and help even more families afford to take a vacation on Memorial Day weekend.”

It’s no coincidence that Americans have enjoyed low prices, considering that the U.S. has remained the world’s top producer of petroleum hydrocarbons since 2013, surpassing Saudi Arabia and Russia. The U.S. retains the top spot again in 2015 according to a report released this week by the U.S. Energy Information Administration (EIA). According to the report, “increases in U.S. petroleum and natural gas production over the past several years are directly attributed to production from tight oil and shale gas formations.” 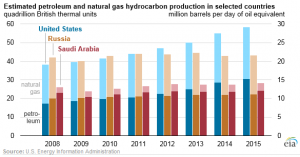 There is a misconception that lower crude oil prices and the volatile market conditions have led to less production in the U.S.  However, as the report states:

“Despite low crude oil prices and a 60% drop in the number of operating oil and natural gas rigs, U.S. petroleum supply still increased by 1.0 million barrels per day in 2015. U.S. natural gas production increased by 3.7 billion cubic feet per day, with nearly all of the increase occurring in the eastern United States.”

The benefits of America’s domestic oil and gas revolution for U.S. consumers, manufacturing, travel and tourism – and the whole economy – is undeniable. Maintaining its status as the world’s number one producer, will ensure that even more American families can afford to hit the road on Memorial Day weekend.