Thanks to Shale, Texas and New Mexico Enjoying Billions in Budget Surpluses

Recent media reports have detailed how tax revenue generated by record oil and natural gas production in Texas and New Mexico has positioned those states to enjoy a combined $4 billion budget surplus in the current biennium. Importantly, a huge chunk of that $4 billion will be used to fund schools in each state, once again demonstrating the far-reaching positive impacts of the shale revolution.

A New Mexico Consensus Revenue Estimating Group report released last week estimates revenues for the fiscal year that began July 1 will outpace spending obligations by an “astonishing” $1.2 billion, about 15 percent more than what was expected. As the report notes, a vast majority of the revenue was generated by oil and gas production,

“The significant majority of the revenue increase in this forecast from prior forecasts is attributed to the oil and gas sector, in particular receipts from Eddy and Lea counties and out-of-state receipts.”

“Surging oil production accounts for about 85 percent of the change in the FY18 recurring revenue amount above the January mid-session forecast. Additionally, of the $857 million in growth in recurring revenues from FY17 to FY18, about $550 million, or 65 percent, can be tied directly to the energy industry through severance taxes, rents and royalties, oil and gas income withholding, and gross receipts taxes.”

This influx of revenue into New Mexico’s coffers is of added significance considering roughly 45 percent of the state’s General Fund revenue is allocated to public education. And the timing simply couldn’t be much better, as New Mexico was recently court ordered to increase funding to public schools in order to meet basic educational standards. As Charles Goodmacher, a spokesman for the New Mexico chapter of the National Education Association union for teachers and school staff, told The Associated Press,

“It’s a perfect coincidence of timing with the court decision saying more has to be spent on the public schools, with this surplus that allows for that to take place.”

In addition to further bolstering the oil and gas industry’s already substantial contributions to education in the state – industry-generated revenue provided $711M for education in 2017, according to the New Mexico Oil and Gas Association – the Albuquerque Journal also reported last week that the influx of state revenue will give lawmakers the option to increase spending on healthcare and other programs next year as well.

The revenue increase has been spearheaded by booming oil production in New Mexico’s share of the Permian Basin, which has vaulted the state past California to become the third-largest oil producing state in the United States. The NMOGA reports that rig counts are currently 68 percent above levels observed at this time last year.

A remarkably similar story has developed across the border in Texas, which will have an extra $2.8 billion in revenue at its disposal for the 2019/2020 biennium thanks to booming oil and gas production. As the Texas Tribune recently reported,

“In a letter to Gov. Greg Abbott and other state leaders, [State Comptroller Glenn] Hegar said Texas was in the midst of an ‘economic expansion exceeding our expectations,’ resulting in robust job growth.

“Texas in particular benefited from rising oil prices and production and the consequent increase in economic activity,” he wrote, noting the state added more than 350,000 new jobs in the last year.”

As is the case in New Mexico, this enviable financial windfall can be attributed largely to the prolific Permian Basin, which accounted for more than $4.35 billion in Lone Star State revenues alone in 2017. All told, the Texas oil and gas industry contributed $11B in royalties, state and local taxes in 2017, with more than $1.1 billion in mineral property taxes going to fund education. As Forbes contributor David Blackmon wrote in a recent column,

“That is again thanks to the booming oil and gas industry, since the Rainy Day Fund is funded almost entirely by severance taxes collected on oil and gas production.”

Along with royalty payments, the Texas oil and gas industry contributes $4 billion annually to education in the state.

Remarkably, a U.S. Energy Information (EIA) report released last week indicates these revenues may merely be scratching the surface of what could be to come. EIA expects Permian Basin oil production to increase almost 600,000 barrels per day in 2019 to 3.9 million barrels per day (b/d). The EIA also forecasts oil production in Texas’ Eagle Ford play to increase 105,00 b/d to nearly 1.5 million b/d in 2019. As the EIA notes:

“In particular, the Permian region in western Texas and eastern New Mexico is expected to account for more than half of the growth in crude oil production through 2019.” 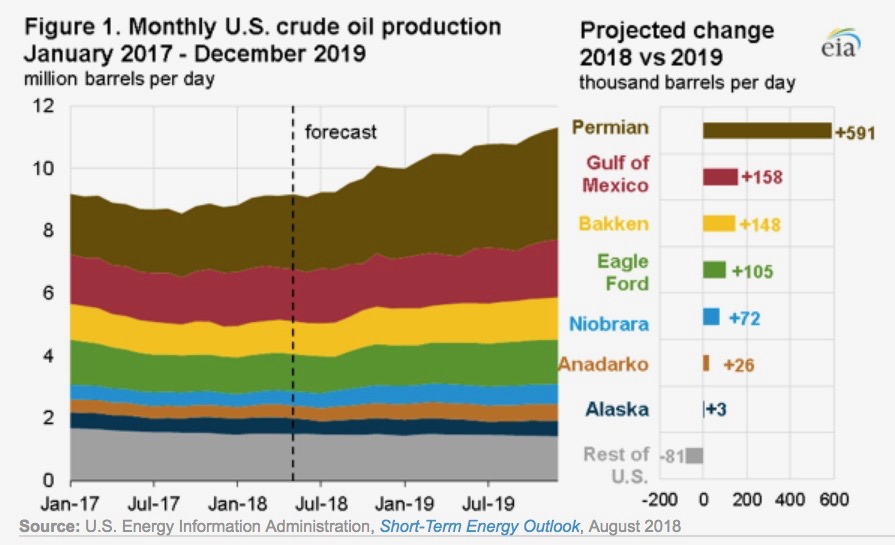 Not Just the Permian

As remarkable as Permian-driven oil and natural gas revenue increases in Texas and New Mexico are, EID would be remiss not to mention that shale production is increasing in literally every major play across the country, driving up tax revenue in many other regions as well.

Record Marcellus Shale natural gas production and related activities have been directly credited for “historic” tax revenues in West Virginia, and the fastest growing economy in the nation.

The Bakken Shale has also enjoyed a resurgence in 2018, putting North Dakota on pace to average a record 1.3 million b/d of oil production this year. Not coincidentally, the Associated Press reported in late May that North Dakota tax revenues 25 percent above expectations, also noting,

“A report by the Legislature’s research arm shows North Dakota’s oil and gas revenue is $1.6 billion for the state’s current two-year budget cycle that began in July. That’s $323 million more than initial estimates.”

Record oil production is also driving up revenues in Oklahoma, where the SCOOP and STACK plays in the Anadarko Basin have been booming. The Norman Transcript reported last month,

“Gross Receipts to the Treasury during the past 12 months, at $12.18 billion, are at an all-time high, State Treasurer Ken Miller announced earlier this week. In addition, at $1.1 billion, gross receipts for the month also set a record high for June collections.”

These remarkable tax revenue figures are an important reminder that record U.S. oil and natural gas production mean much more than bragging rights and improved bottom lines for producers. By filling state coffers, the shale revolution is not only fueling our economy, but our public education system as well.