Residents across the Appalachian region have been benefiting from Marcellus Shale development since the first successful well was developed in Southeastern Pennsylvania, over a decade ago. Now, with natural gas becoming more affordable, states like New York – which are ramping up natural gas use – are seeing wholesale electricity prices plummet as more and more power plants begin to use natural gas.

From a recent Bloomberg article:

“The shale boom has reached the Big Apple.

Wholesale on-peak electricity prices for Manhattan and its four neighboring boroughs averaged $40.99 a megawatt-hour since the start of July through Sept. 11. They’re headed for a record third-quarter low, based on Independent System Operator Inc. data going back to 2006.

The following graph from the same article shows just how drastic the drop in price has been: 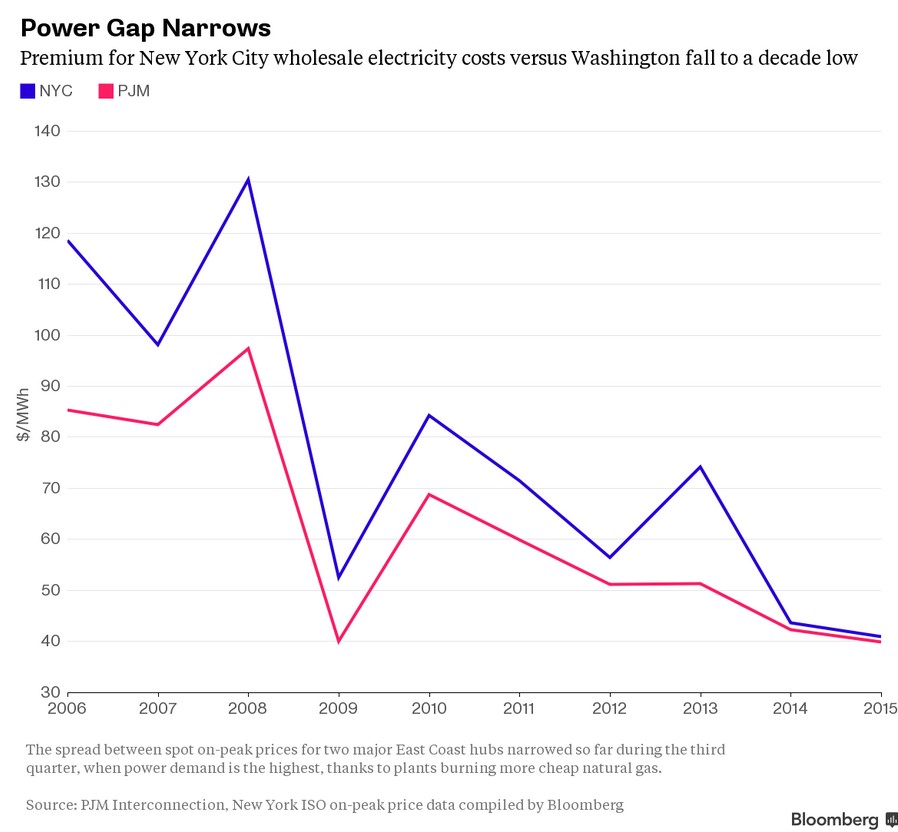 “Cheaper gas definitely plays a part in bringing the prices of the two grids closer in line with each other. PJM used to send a lot more power to New York Independent System Operator (NYISO) and those flows have dropped with gas prices.”

Besides more affordable electricity prices, New York has actually been benefiting from Marcellus Shale in many other ways. Two years ago this week, former New York City mayor, Michael Bloomberg announced that NYC’s air quality was the best it’s been in 50 years thanks in no small part to expanded natural gas supplies and local distribution. According to the former Mayor Bloomberg, the cleaner air is estimated to prevent as much as 800 deaths and 2,000 hospital visits per year. Given all the benefits New York has experienced from Marcellus Shale development in neighboring states it’s no wonder that the Empire State’s energy plan is calling for expanded natural gas infrastructure and end use over the next few decades.

New York isn’t the only Northeast state benefiting from shale development without actually having any development within their borders. New Jersey and Rhode Island residents are expected to save money in the upcoming months due to increased production in neighboring states. According Jeffrey Dubois, president of South Jersey Gas:

“Lower wholesale gas prices, coupled with effective gas-supply portfolio management, are the primary drivers of this reduction in rates.”

In fact, since 2009 Public Service Electric and Gas Co. (PSE&G) has lowered its rates by 47 percent thanks to increased natural gas supplies from neighboring states. A similar situation is happening in Rhode Island with National Grid announcing that heating bills would be dropping by 10 percent this winter.

Despite its ill-advised ban on hydraulic fracturing, New York – like the rest of the country – is continuing to benefit from domestic natural gas production. And, as more pipeline projects come online in the next few years, states should continue to see more affordable energy in their homes.