The FRAC Act Returns – But Will Anti-Fracking Celebrities Return With It? 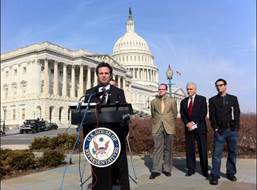 Reports are in that U.S. Senator Bob Casey (D-PA) and Representative Diana DeGette (D-CO) are set to reintroduce the Fracturing Responsibility and Awareness of Chemicals Act, commonly called the FRAC Act. What remains to be seen is whether the usual cadre of celebrities and “ban-fracking” activists will return along with it.

The bill has failed spectacularly in the past.  In fact, this is Senator Casey and Representative DeGette’s fourth attempt to push this legislation.  An EnergyWire story this week offers some insights as to why:

“The ‘Frac Act’ has not fared well since a version of it was first introduced in 2009. Even when Democrats controlled both chambers, it didn’t get a hearing. With Republicans in charge, Congress is even less likely to approve increased federal regulation of drilling.” (emphasis added)

In other words, the bipartisan opposition to this bill has been so strong that not even a Democratic controlled Congress would back it.

EID has noted on many occasions that the bill is based on the fundamentally incorrect notion that it would somehow “restore” EPA regulation over hydraulic fracturing under the Safe Drinking Water Act (SDWA). The fact is, hydraulic fracturing has never been included under EPA’s SDWA authority, so there’s nothing to “restore.”

For roughly 20 years, anti-industry activists have been pushing to federalize the hydraulic fracturing permitting process with the ultimate goal of shutting it down.  But just to show how marginalized they are, even the EPA doesn’t agree with them.  For instance, when activists tried to increase EPA regulation over oil and gas producers through the SDWA in 1995, their petition was soundly rejected by the Clinton Administration.  As then-EPA Administrator Carol Browner said:

“There is no evidence that the hydraulic fracturing at issue has resulted in any contamination or endangerment of underground sources of drinking water.”

“EPA does not regulate – and does not believe it is legally required to regulate – the hydraulic fracturing of methane gas production wells under its UIC program [under the Safe Drinking Water Act].”

“States are stepping up and doing a good job. It doesn’t have to be EPA that regulates the 10,000 wells that might go in.”

Along with the FRAC Act, a group of lawmakers are also set to introduce a package of legislation dubbed the “Frack Pack” that would broadly increase federal regulations over water and air surrounding oil and gas development. Among the sponsors of these proposals is Rep. Jared Polis (D-CO), who has a long history of working with “ban fracking” activists to advance their agenda, which calls for shutting down oil and gas development across Colorado and the rest of the nation.

That is why anti-industry activists like Gasland director Josh Fox and Hollywood actor Mark Ruffalo have been big supporters of the FRAC Act. In 2011, Fox and Ruffalo flew all the way to Washington D.C., lending their “star” power to a press conference in support of the bill, earning the pair high praise from Rep. Polis:

“I’m excited that we will reintroduce the FRAC Act soon, and will push to correct other loopholes that have been slipped in under the radar and pose a danger to our constituents. We’re willing to fight hard on our end here in Congress, but change happens when our citizens demand action.  Josh Fox and Mark Ruffalo have done an amazing job bridging the gap between government policy and grassroots support and built up an army of believers devoted to the cause. ”

Of course, one of the FRAC Act’s biggest supporters is Food & Water Watch, a fringe activist group that adamantly opposes hydraulic fracturing because they believe it’s “inherently unsafe … [and] can’t be made safe through government oversight or regulations.”  Their hope is that once the federal government has authority over hydraulic fracturing, they can launch a lobbying campaign to ban it. From Food & Water Watch spokesman Rich Bindell:

“Food & Water Watch supports a national ban on fracking. … But, the FRAC Act is a necessary measure that offers a bare minimum of protection until we can ban the process altogether.”

But if the past track-record of this bill is any indication, not even another star studded press conference can save this legislation.