The U.S. Energy Information Administration (EIA) recently released its Drilling Productivity Report (DPR), which showed that since January 2012 natural gas production in the Marcellus and Utica shale regions has accounted for 85% of the increase in natural gas production in the U.S. EIA attributes this steady production increase to technological advances including improvements in the precision and efficiency of horizontal drilling and hydraulic fracturing. 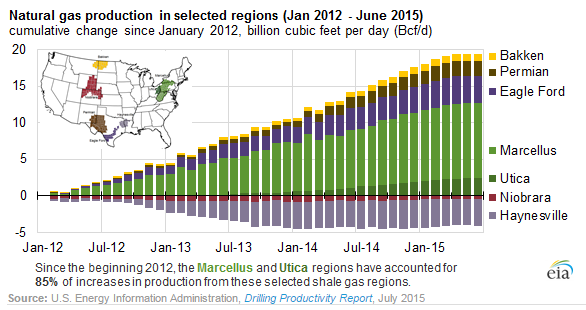 As the EIA chart illustrates, the production gains have been substantial for these two plays. The July DPR notes that the Marcellus region produced an estimated 6.3 billion cubic feet of natural gas per day (Bcf/d) in January 2012, whereas the same region produced 16.5 Bcf/d in July 2015. The Utica region’s production in July 2015 was almost 18 times higher than that in January 2013 (2.6 Bcf/d and 0.15 Bcf/d, respectively).

Still not sure just how significant these production figures are? Check out this short video to see what can be fueled from just one BCF of natural gas:

This level of development has created economic growth and a staggering level of jobs in Ohio and Pennsylvania. In fact, millions of work hours are being added to Ohio building trades because of shale development in the state, giving opportunity to local tradesmen and women who work all along the shale production supply chain. The creation of middle class jobs domestically is of great importance to the overall U.S. economy– according to a recent study by the Harvard Business School:

“Unconventional gas and oil resources are perhaps the largest single opportunity to improve the trajectory of the U.S. economy, at a time when the prospects for the average American are weaker then we have experienced in generations. “

The same study notes that unconventional drilling has contributed more than $43 billion to annual U.S. GDP, and added nearly 2.7 million American jobs. In Ohio specifically, $28 billion of investment have been added into its economy and thousands of new jobs have been created– reducing unemployment by approximately 66%.

In Pennsylvania, data was just released for the unemployment rates in Greene and Washington Counties, two of the most heavily developed counties in the Marcellus. According to the Washington Observer-Reporter:

“Washington’s figure was 5.2 percent and Greene’s 5.6, according to statistics released Tuesday by the Pennsylvania Department of Labor & Industry.

June was a trend-changer for Washington County. Its latest figure also was below that of the nation (5.3) and state (5.4) again, after the county exceeded both sets of numbers in recent months. The county figure has been at or below the U.S. rate 27 of the past 29 months.”

And just last month the Pennsylvania Public Utility Commission (PUC) released the latest impact fee revenue for 2014 which will provide $223.5 million across the state, with roughly $96 million going to counties with Marcellus development.

This news comes at a time when natural gas demand in the Northeast markets is increasingly growing. A variety of pipelines have been proposed to get this surplus to end users in New York City, Boston and along the East Coast where traditionally winter heating costs have been the highest in the country due to colder weather and high demand. High regional production coming out of the Marcellus and Utica Shales could be a win-win for all across the Northeast once needed infrastructure is in place.

The Marcellus and Utica Shales continue to be game-changers not only in Pennsylvania and Ohio, but across the country as this latest data demonstrates.