Well, the anti natural gas activists are at it again, coming down from Ithaca to protest an existing New York company with misinformed reasons for doing so. We covered another such protest last month at Talisman’s office in Horseheads, where these mostly out-of-towners rallied in a parking lot to disrupt business for the company. It was broken up by police after only 30 minutes, but the group’s claiming success so they are attempting round two this weekend in Watkins Glen. We weren’t planning to turn this into a series, but it seems these activists need yet another reminder of what exactly they are protesting.

Growing up in a family that bleeds NASCAR, I couldn’t help but have a little fun with this one, so buckle up, get the radio blaring “doo-wah-ditty,”, and start your engines–it’s race (and protest) weekend at The Glen!

The Drivers Line Up at the Start

The protest is being led by “The People’s Action Against Fracking” and Shaleshock Action Alliance, the same groups which organized the Talisman protest. While the last protest brought out some faces we haven’t seen too often, it was attended by the same folks who have their hand in just about everything in Pennsylvania and New York, using up vast amounts of that petroleum they love to hate. 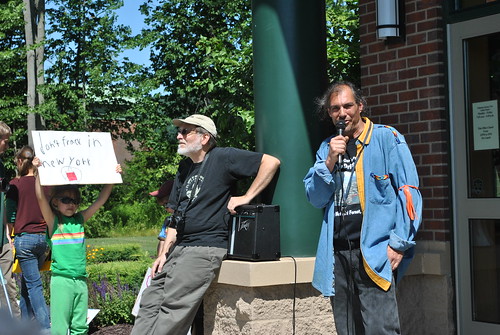 Here’s the plan for Saturday:

What: We will first gather for a pre-action breakfast and orientation. We will then caravan to the site of the action. Once we arrive at the site, a number of prepared, dedicated individuals will risk arrest by using their bodies as a direct resistance to fracking. The rest of us will join together in a large family friendly rally where we will hear speakers (including Sandra Steingraber), chant, sing, and raise our voices in resistance amid puppets, signs, and music-makers.

What to Bring: Water, a small snack (if you want), comfortable, weather-appropriate clothing/shoes, anti-fracking signs, drums and other music-makers, your voice!

Why: The anti-fracking movement needs direct action like never before. This summer, we need to show the public, the industry, the politicians and ourselves that we CAN and WILL take our bodies to the industry’s door. We must band together and resist as a community if we want to survive as a community!

As the gas industry continues to build fracking infrastructure in New York, threatening our state and others in the Marcellus region, we cannot continue to simply cross our fingers that something will prevent fracking from destroying our home. We must be the force that stops fracking.

This action is about solidarity throughout the Marcellus region. There will be NO sacrifice zones.

Pre-Orientation Meeting Thursday, August 9th:
If you are able to make it, we encourage you to come to this meeting at 6:30 PM at the Shaleshock organizing space above Autumn Leaves Used Books on the Ithaca Commons.

At the meeting, folks will be able to take on roles for the day of the action, make signs, and meet the organizers and other participants. There will also be an opportunity for legal questions and concerns to be addressed, so attendance is particularly useful for those considering risking arrest.

One has to wonder why training would be held 40 minutes away for an event in Watkins Glen, but then again the organizers who don’t hail from The Glen also had to change their “staging” location because they didn’t know about it being NASCAR weekend. That really sums it all up right there, but we’ll talk more about that later.

Interestingly, the organizer is a newcomer to the anti-natural gas scene, Sam Law, a college student from Ithaca, New York. According to his Facebook page, he may be giving up college for a time “to organize” and “help stop the destruction of my home community.” Ithaca will not likely see development judging by the depth of the Marcellus Shale formation there, but apparently this kid drank the Ithaca kool-aid and hasn’t quite realized that. But I digress…

Law identifies as an anti-Capitalist, who despite being called out even by some of his friends, like the following from Curtis, on Facebook,

It’s brought tons of new small businesses, thousands of people, and is circulating hundreds of thousands of dollars into the local economy every single day. Get your info right. And if you have such a problem with clean natural gas then don’t be apart of the problem. Don’t turn your heat on in the winter when it gets cold or don’t go into any public buildings at all and enjoy the comfort of the heat…I still am confused about the “militarized” part btw. It’s business, it makes the world turn.

Law is also the organizer of the Horseheads protest and has continued this one despite, bumping heads with some of the big wigs of the fracktivist movement.

There isn’t enough space in this movement for folks who are self important, don’t respect the organizing work of others, don’t believe that other people can work on different yet complementary projects and don’t have the slightest concept of a diversity of tactics (and I am not talking about the violence vs. non-violence debate here)

Also (it’s amazing what you can find on the internet!) Law has connections to Earth First! and Ramps (Radical Action for Mountain People’s Survival) Campaign according to his Facebook, two groups who use their bodies to protest resulting in arrests and vandalism of personal property. Saturday’s protest, according to Law’s blog posts on it, will offer individuals this same “opportunity” to get arrested.

Bill Huston, one of our favorite activists and major players in Shaleshock Media, was prominent in the last protest and will probably be at this one as well.  We’re sure he wouldn’t waste an opportunity to film other people getting arrested while he documents the action. Huston, who we’ve seen in a near meltdown over a university allowing pro-natural gas videos to be shown when the anti side of the debate chose not to and giving the famous “Ohms” at the SRBC meeting in Wilkes Barre, Pennsylvania making a mockery of the reason for public testimonies, will be driving roughly 160 miles round trip for the event.

Bram Loeb will be traveling roughly 180 miles round trip for this protest in his ethanol powered diesel truck. We should recognize him for making the effort to convert to an alternative fuel source, but have to wonder what the farmers and the rest of the movement think about the vehicle when we’re in the midst of a drought and corn prices are skyrocketing as a result of the ethanol policy?

Drought situation for corn and soy farmers from 350.org

Bram hails from the same town as our own Rachael Colley, was raised in a family of protesters, and recently dropped his son off to join the Air Force. Ouch. While Bram will continue to fight against American energy independence, we’ll keep working to ensure enlisted individuals, like his son, no longer have to go to wars overseas to secure our energy interests.

The organizers have been trying to raise money to post bail for individuals who decide to get arrested on Saturday, but have only managed to raise $175. Yikes, that’s not going to get anyone far, so we hope these folks have generous parents or some liquid funds in their bank accounts.

The number of endorsements for this protest compared to the last have dropped as well, an odd turn of events for something being touted as:

the largest demonstration directly confronting the gas industry in New York State — ever.

If Occupy Well Street is involved maybe this will be one of the protests where Alex Lotorto gets arrested instead of standing on the sidelines.

Protesting the Lead Car in Taxes and Employment: Inergy

So who are they protesting this time? Ironically, a company that has nothing to do with hydraulic fracturing or even a drilling rig, but rather one that stores and transports natural gas and propane. So much for their plans to visit a “frack site!”

That’s right they will be protesting Inergy, owner of U.S. Salt, Central New York Oil and Gas and propane storage facilities in Watkins Glen. Let’s talk a little about the company they are fighting against.

Inergy is the largest employer and the highest tax payer in Schuyler County. At a time when New York’s economy is struggling, Inergy is building a new propane storage facility that will bring new employment opportunities to the area. The storage facility is nothing new for the region as it is using a salt mine that was previously used for the same purpose for decades. Here’s some interesting tidbits we learned about Inergy:

Further the company has been an integral part of the community from hiring locally to providing funding for community service projects. In 2011, U.S. Salt alone donated to the following projects and organizations:

Inergy owns Central New York Oil and Gas, which was also given a citation for their efforts during last year’s flood.

So to sum it up, these predominantly out-of-towners are trying to protest the largest employer and tax payer in the county, who happens to give time and money to local charities and organizations that benefit the community. Wow, that makes a lot of sense.

The Course Has Yet to be Defined

Interestingly, the group has had to move their “staging” location because they weren’t aware of the NASCAR race this weekend. I had to include this and laugh when we heard because this just shows these organizers aren’t members of the community. I’m sure everyone in Watkins Glen–be it hotels, wineries, gas stations, restaurants, dollar stores, anti or pro natural gas–knows the race is this weekend. You’d have to be from a different planet not to.

The rally will be in the Southern Tier, a short drive from the staging site near Watkins Glen (which will be announced tomorrow, our original staging site has to be changed due to conflict with a Nascar race!). The rally will be part of Direct Action, where we will be directly confronting the fracking industry. There will be many ways to participate in this action, from just coming and holding a sign to using your body to directly resist the fracking industry. It should be a fun, empowering and moving action.

There will be an orientation at 6:30pm at the Worker’s Center in Ithaca (above autumn leaves on the Commons). This is not mandatory, but there will be a legal briefing and civil disobedience training if you are considering being involved in that capacity. Otherwise, stay tuned at www.dontfrackwithus.org and come to the action saturday.

See you then!
Sam Law

Will the protesters stage themselves at or near The Glen (Watkins Glen International) to disrupt an American pastime and family weekend of NASCAR? Will they go to an existing Inergy facility like U.S. Salt, the Savona Storage facility, or Inergy’s office in Watkins? Will they attempt to stop construction of the new storage facility planned in existing storage mines in Watkins Glen? We don’t know yet because they are playing their race strategy close to the chest, but what we do know is the message will be the same and it doesn’t really matter where they set up. Their motto is, “We don’t support existing business. We don’t support new business. Doo-wah-ditty-ditty dum-ditty do.”

If you are going to Watkins Glen for the race this weekend, we hope you enjoy a safe, fun weekend with friends and family. It should be a great race, as always, at The Glen!