This Again: Activist-Led Tour Results in Misinformation and Trespassing

I recently followed around yet another tour of Susquehanna County, Pennsylvania given by none other than Vera Scroggins and Craig Stevens.  A couple of New York Senators attended, including Senator Avella, who seemed particularly averse to hearing the truth about natural gas development.

The group of about 20 came from New York City to see what natural gas looks like in rural Pennsylvania.  One hopes they noticed the booming economy and the still rolling, lush hills of Pennsylvania – but my impression was they were seeking only gloom and doom to report back to constituents in justification of their already staked out positions.  They certainly weren’t pleased to have a different viewpoint along to offer a positive voice on the subject, that much is for sure.

At the first site they visited, Scroggins was visibly upset to see anyone who dared to have a viewpoint different from hers.  She tried to put me on the spot even as she regurgitated misinformation to anyone who would listen.  You can hear her, in the video below, introduce me to the crowd and tell them I worked for Energy in Depth (guilty!).  When I attempted to introduce myself, she tried talking over me and told me I should leave.  So much for getting a balanced perspective.

Senator Avella was also frustrated to have someone in his presence who supported shale development, and was rather aggressive about it, as you can see in the video.  He seemed intent during his rant on intimidating those who disagree with him in order to make himself look tough.  There are plenty of opponents of natural gas development who don’t resort to such haughty and uncivil tactics, and people likely expect better from an elected “leader.”

Senator Avella alleged that I was making the natural gas industry look bad.  That’s an interesting view for someone who went on a “fact-finding tour” with a known opponent of the natural gas industry and never bothered calling anyone to see if he could get on a natural gas well site or hear the other side.  He seemed to take in everything Scroggins said without questioning it because it fit his own personal agenda.  Granted, politicians sometimes take positions and only later seek confirming facts. But allowing yourself to be escorted around by an advocate of zero credibility and then challenging those who challenge you is not indicative of anyone interested in learning. 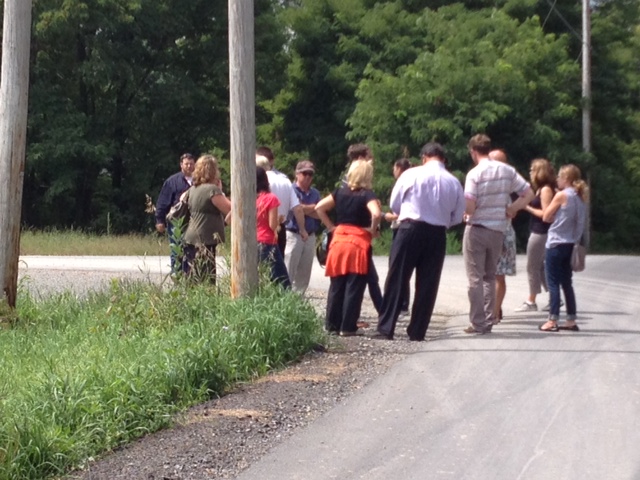 Fittingly, Scroggins and company were actually trespassing on the gas company access road, as the photo above demonstrates.  Scroggins is not allowed to take visitors on site, of course, but has a history of trespassing anyway. The ends justify the means, right?

Scroggins, who claims to be knowledgeable about the natural gas industry, was also unable to explain even the basic equipment on site.  At one point she asked me what the “gray tanks” on site were all about.  Anyone with a basic knowledge of the industry would know they are holding tanks for produced water or development mud, but since Vera doesn’t understand the industry she’s criticizing, her question was not surprising.

The tour was exactly like the last few. The part that surprises me is that otherwise intelligent people keep signing up to go on these, when the tour guide has been repeatedly exposed as a foul-mouthed xenophobe.  The facts to rebut nearly everything Scroggins offered are readily accessible and have been repeated ad nauseum.  Yet, elected officials continue to go for the charade and then act like they’ve been educated about the natural gas industry.  That’s unfortunately not surprising.  Our governor, after all, would have us believe a child can fall down a gas well, and gets his information from for-gas-before-he-opposed-it RFK, Jr.

Still, one would hope that elected officials would know better than to seek objectivity from an activist of Scroggins’ caliber.  Sadly, those hopes were dashed yet again with this tour.