It’s that time of year again. The Center for Western Priorities is out with yet another report on oil and gas industry “spills,” and as has been the case in years’ past, it once again misrepresents data and leaves out crucial context on the industry’s strong mitigation record.

The report is a shameless attempt at fearmongering from an organization that has a clear anti-energy agenda and it is part of a multi-million-dollar effort that finances causes and groups opposed to the industry. It’s just the latest example in its campaign to tear down responsible oil and natural gas development by distorting the truth.

Here are 3 things to know about the spills report from CWP:

CWP attempts to portray that there is vast amounts of materials in these spills. In 2019, the report says 23,600 barrels of oil and 170,223 barrels of produced water were spilled across Wyoming, Colorado, and New Mexico.

But how many barrels is that from the overall total produced? It’s crucial context the report leaves out, probably because telling the public that information greatly diminishes the impact it’s trying to make.

When including natural gas production – Wyoming (1,548,269 million cubic feet), Colorado, (1,992,698 mcf), and New Mexico (1,868,858 mcf) – which results in plenty of produced water, it’s clear that the percentage of material spilled is extraordinarily small compared the overall amount of energy produced.

Further, while the goal is always to have zero spills, the industry makes every attempt to mitigate the potential impacts of these incidents when they occur – a fact that is clearly shown when digging deeper into CWP’s report. CWP created a map with a red dot representing each spill that happened in 2019 in Wyoming, Colorado, and New Mexico – what the study claims is 2,811 spills in total.

But clicking on each dot reveals more information about the spill. Or more accurately, reveals that there wasn’t much of a spill at all or that it even left a containment area. A closer look at CWP’s map shows that in many cases while an incident may have occurred, oil or produced water was actually spilled, yet those “spills” are still counted in CWP’s total.

For instance, an incident near Roswell, N.M. resulted in two barrels of oil spilled with no impacts to waterways or groundwater. Yet, the report focuses on the potential effects on residents, without mentioning this key detail – which is the case with the majority of incidents. In most incidents, spilled fluid never leaves the many layers of containment resulting in no environmental impacts.  For example, one spill east of Ft. Collins, Colo. was completely contained: 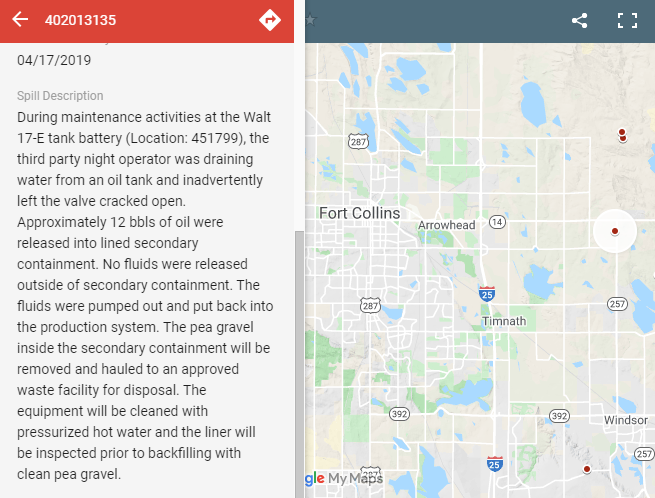 Another nearby spill also didn’t even leave the production area:

“A vac truck was called out to suck up any free liquid. Contaminated soils will be excavated and disposed at an approved landfill. After excavation, a third party will pull a soil sample from the excavation to ensure all contaminated soils have been removed. … No fluids from the release left the pad surface.” (emphasis added)

And some spills aren’t spills at all. At an incident just south of Nadine, N.M., the issue was a fire at a production site where no oil or produced water was even spilled.

Importantly, the report also made no effort to tell readers how operators addressed spills – unless they had the time to click on hundreds of red dots. For example, clicking for more details on another Colorado spill reveals:

“Contractor left transfer pump engaged while helping with another task on location. Before returning to the task, the filtered water overflowed approximately 1 bbl of flowback fluid. The tank valve was then closed off and the transfer pump was shut down. A vac truck was called in to suck up any free liquid. The tank was taken out of service and moved out of the way so the contaminated soil could be removed, and new clean dirt brought in.”

Yet nowhere does CWP discuss any of this in its report, leaving the public and media to only get it if they click through thousands of incidents on the map for more information.

CWP’s spills report is hardly an unbiased analysis of important data. The group has run anti-fracking ads across Colorado’s Front Range and joined other activist groups like the Sierra Club, Earthworks, and Environment America in 2014 in an effort to ban two-thirds of oil and natural production in Colorado.

CWP is part of the New Ventures Fund that’s distributed millions of dollars to anti-energy causes and campaigns and has done polling to boost a legislative initiative in Arizona funded by billionaire activist and former presidential candidate Tom Steyer.

This isn’t the first time CWP has pushed a flawed study on spills and even attempted to blame a methane cloud along the New Mexico-Colorado border on oil and natural gas even though the region is home to large natural methane seeps, abandoned mines, and other sources. It also published a misleading map that exaggerated the size of the average oil and natural gas well as many as 45 times.

The Center for Western Priorities has no interest in sharing accurate information with the public, as demonstrated yet again by its latest study on spills. It left out key context and hid information from readers in an attempt to fearmonger. This report is just another example of anti-energy activist groups that spend millions of dollars working to ban responsible energy development attempting to influence public opinion with biased research.