Top Energy Officials: Ohio to Produce More Gas than it Consumes, Thanks to Fracking

Ohio’s oil and gas division chief Rick Simmers told a packed room in Youngstown this week, “We have our lifestyle because we have energy. Energy is an important asset to use because we have oil and gas.” This declaration came in conjunction with major news this week from  James Zehringer, director of the Ohio Department of Natural Resources (ODNR),  who announced that Ohio is on pace to produce more natural gas than the state consumes. The agency predicted Ohio would hit this milestone later this year, making Ohio a net exporter of natural gas.

Zehringer and Simmers both acknowledged the staggering production coming from the Utica Shale for achieving this feat, boasting that the state’s oil production doubled from 10.9 million barrels in 2014 to 21.9 million barrels last year, while natural gas production rose a whopping 110.6 percent from 452 billion cubic feet (Bcf) in 2014 to 953 Bcf last year.  To date, Ohio has 1,500 wells drilled of which 1,000 are in production.

In addition to an overview of the current state of Utica Shale development, ODNR officials also took time to address questions and concerns from the community. Topics included injection wells, well construction rules, and other matters pertaining to regulating the oil and gas industry.  To sum up the event, Director Zehringer said it best,

“We’re going to continue to make sure that we have regulations and policies in place that are science-based and not emotion-based, and we continue to work with the industry. Governor John Kasich wants to encourage oil and gas development, but not at the expense of the environment.”

Here are the three key takeaways from ODNR’s update.

ODNR posted the most recent Utica shale results for the fourth quarter of 2015 last month. The results showed that horizontal shale well production increased more than 75 percent for oil and 80 percent for natural gas from the previous year.

As EID pointed out recently, Belmont County is the natural gas county to watch in 2016 and that was certainly obvious by the fourth quarter’s production results: Belmont County had the top 10 best producing gas wells in the state.  The Utica Shale operators with the best wells this quarter were Rice Drilling, Ascent Resources (formerly American Energy Utica), and Chesapeake.

The top ten natural gas wells this quarter were as follows: 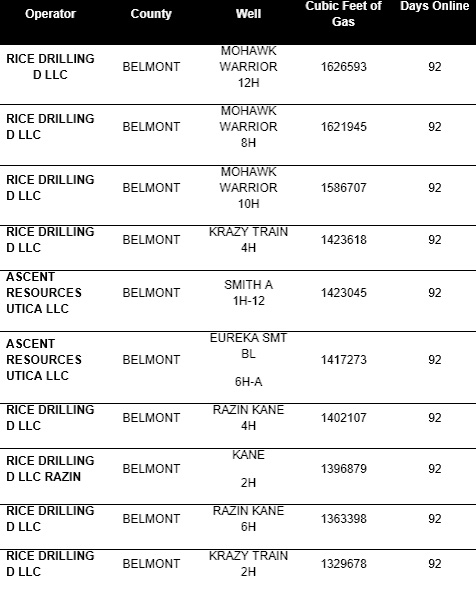 As ODNR officials stated this week,

This is all certainly wonderful news for Ohio’s growing economy, which — as recent reports indicate – will continue to benefit from shale production and the construction of associated infrastructure for years to come.

The Youngstown Business Journal reported that, “members of the audience – including some opponents of oil and gas drilling – appeared satisfied with the ODNR officials’ presentation.”  That’s because Ohio regulations have been keeping pace with the oil and natural gas industry.  Nowhere is this more obvious than the state’s primacy over the U.S. Environmental Protection Agency’s (EPA) Underground Injection Control program (UIC), which even the most outspoken of activists have acknowledged. Frack Free Mahoning Valley anti-fracking organizer, Dr. Ray Biersdorfer who said, “now they’re being much more responsive to it.”

Ohio was given the right to regulate its UIC program in 1983, and was granted permission to continue doing so this year after the state received high remarks following an audit of the program by the EPA. As the oil and gas division chief rightly pointed out at the meeting this week,

“[T]he federal government gets to decide whether our laws and rules are at least as stringent, if not more stringent, than the federal code.”

To highlight that point, take a look at the states’ regulations vs. the U.S. EPA’s on injection wells.  As you can see, Ohio clearly has more stringent regulations than even the federal government. 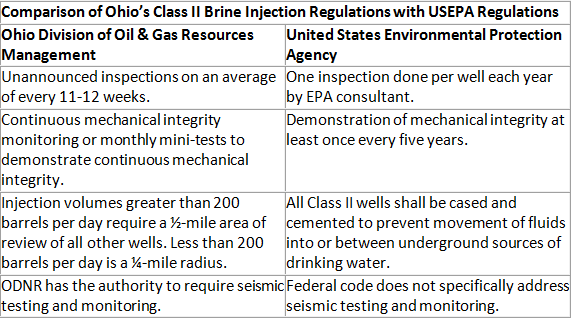 Allowing the state to regulate the industry has enabled Ohio to keep pace with the industry as well. It was noted several times by the Ohio regulators that the state has “learned a lot” along the way and as a result, continues to make the regulatory changes required to address various measures associated with the safe and responsible development of oil and natural gas.

These changes have allowed Ohio, and more specifically the Youngstown area, to gain national attention in the United States Geological Survey’s (USGS) National Seismic Hazard Mapping Project because this year Ohio’s risk level has been reduced. In fact, the Youngstown area is no longer listed as a geologic hazard.

Chief Rick Simmers believes that this is a direct result of the swift regulatory changes made by the state. He pointed to a recent statement made by USGS Seismologist Justin Rubinstein, who said,

When it comes to earthquakes, both the USGS report and the example of Ohio’s mitigation efforts clearly show that wastewater injection is a primary cause of induced seismic events, rather than fracking. It also illustrates that the risk of damaging earthquakes from induced seismicity is low, and through proper regulator reforms, can in fact be mitigated through seismic monitoring.

#3: Drilling in and under Mill Creek Park is not new, and we are producing oil and natural gas safely

Perhaps one of the most beautiful areas in Ohio is can be found in Youngstown at Mill Creek Metroparks. The park includes miles of bike trails, hiking trails, waterfalls, and it surrounds Lanterman’s Mill, a historic landmark built in 1845-46. Nestled among the sprawling Youngstown state park are dozens of residential areas—from historic homes to new subdivisions—and also peppered throughout the area are a host of oil and natural gas wells. In fact, the most recent report shows that the park received over $118,000.00 from oil and gas royalty monies in 2014, and over the years has actually received millions of dollars.

What’s more is that throughout the long history of oil and natural gas development in the park, it has been done both safely and responsibly. Former ODNR director, Sean Logan, discussed this at the event this week,

“I helped negotiate a lease that has producing wells located right now in Mill Creek Park. It can be done safely and appropriately. It is being done right now. It’s about how the well is constructed. “

One only has to take a look at the following picture of a neighborhood in Canfield that sits adjacent to the park, less than a quarter mile from completed wells and tanks, to see that these wells can be developed without harming nearby residential areas. 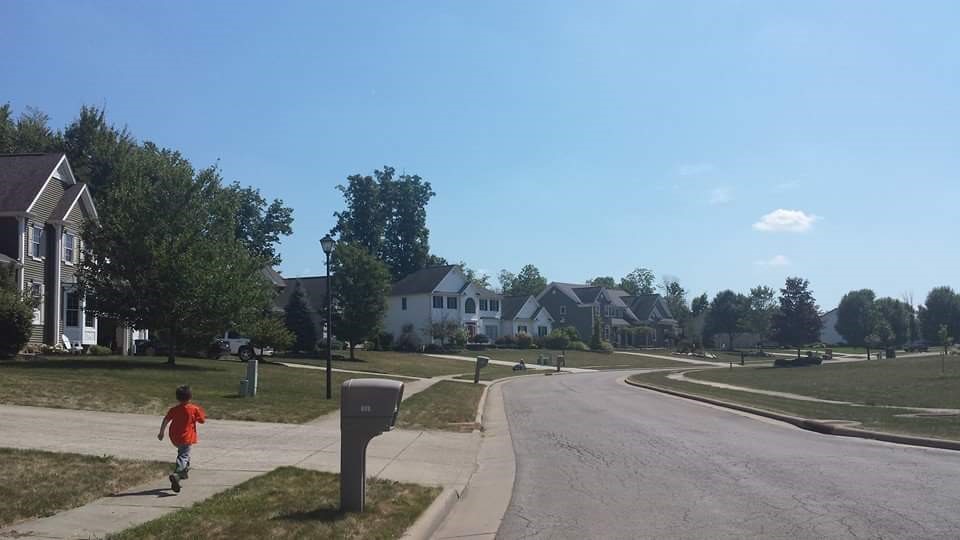 As can be seen in the picture, oil and natural gas production is quite literally occurring safely and in conjunction with the park, while providing vital funds to the metroparks that allow the residents of this community and visitors to enjoy the park at no charge. This is certainly a win-win.

The bottom line is Ohio is on the verge of producing more energy than it consumes, allowing the state to be a net exporter, while keeping regulatory pace with the industry and we are all benefiting as a result.  Ohio’s former ODNR director Sean Logan, truly summed it up by saying, “The thought it can’t be done, it can.  And it’s being done now in a responsible way.”