UPDATE (12/11/2015): The Williston Herald recently confirmed what many observers of “Fracking Hell” suspected: Much of the content of the program was completely made up.

As the outlet reported, “an assistant to the show’s producer, along with a man who appeared on camera during the program, have said in recent weeks that the final product was not a completely honest portrayal” and that they “weren’t trying to paint a pretty picture.” (emphasis added)

“They spun a lot of those stories in a different direction than how we filmed them,”  film crew member Greg Zart to the paper. “I was disappointed with the subtle things they did that they didn’t need to do. They cut it and edited it in a way that was slightly different from reality.”

“That never happened,” said Zart, who attributed the scene to the editors’ cherry-picking.”

Speaking of the biker gang narrative, “Rick,” the masked man portrayed as one of the gang’s leaders doesn’t even own a motorcycle (The man shown on the bike was not “Rick” at all).

Zart also said the producers wanted to create a narrative of underground gambling, but had to scrap the plan when they couldn’t find a single bookie. And the shots in which scrap metal thief and meth head “Cowboy” apparently reacts to being recognized on the road by police and describes one final heist of scrap metal as his ticket home are fiction as well. “All that was completely fake,” Zart said.

“Cowboy,” who declined to reveal his real name, told the paper that the show’s editors took things he said out of context to make their portrayal of him as an addict and desperado more convincing.

“I wasn’t going to wear a mask,” “Cowboy” told the Herald. “Now I understand why (they insisted). They turned the story to where what I told them they took it and  intensified it. I just basically told them how it worked.”

“After I watched the video…they just did it for the damn money, the publicity,” he said. “They had me believing they cared.”

Hollywood is known for its sensational depictions of just about everything, but ABC’s “Blood and Oil” and the recent “Fracking Hell” episode of the National Geographic’s Underworld Inc., which attempt to depict life in the Bakken Shale, have taken sensationalism to a whole new (and actually quite hilarious) level.

Just how over-the-top are these new shows? Here are the five silliest mistakes Hollywood has made about fracking in North Dakota.

#1: They film mountains – in North Dakota! 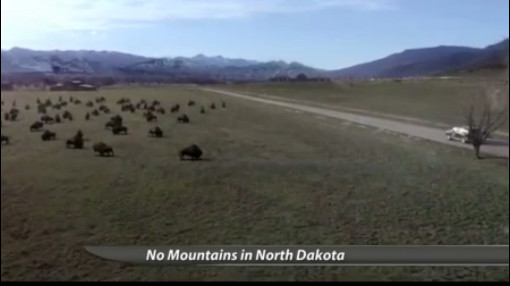 Reporting on the premier of “Blood and Oil,” Reuters noted,

“North Dakotans, so annoyed that ABC’s oilfield soap opera ‘Blood & Oil’ features sweeping vistas of mountains that don’t exist in their state, made a drinking game out of the geological farce during the show’s Sunday night premier.

See the dusty peaks of the Rocky Mountains towering over pipelines? Take a drink.”

The show is actually shot in the mountains of Utah,  900 miles away from Williston, the town for which the fictional Rock Springs is based upon. “Blood and Oil” co-creator Josh Pate offered the following explanation to Reuters:

“We looked into filming in North Dakota, but there are more resources in Utah.”

Pate is referring to the $8.34 million tax credit the show’s creators received in Utah, which offers filmmakers a 25 percent tax rebate!

This ever so slight miscalculation of oil prices in “Blood and Oil” at $756 a barrel didn’t go unnoticed by top energy beat reporters, including the Houston Chronicle’s Jennifer Dlouhy, Politico’s Elana Schor and Bloomberg Business’ Stephanie May Joyce.

They also predicted that the show wouldn’t last much longer: 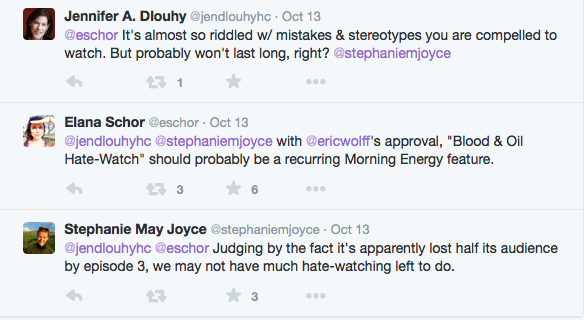 #3: Portrays everyone in Williston as a criminal

If you’re looking to win friends and influence ratings, it might not be the best idea to suggest that everyone in Willison is a criminal.  But National Geographic’s “Fracking Hell” portrays life in Williston based almost exclusively on anonymous sources who choose to wear disguises and mask their voices because they don’t want to get caught by the police.

But as Rob Port, one of North Dakota’s most prominent bloggers, recently pointed out, despite incessant stereotyping, North Dakota has one of the lowest crime rates in the nation, and a far lower crime rate than many metropolitan regions such as Minneapolis. One can find criminals anywhere so seeking out a few local petty criminals doesn’t exactly make Williston a “fracking hell.” 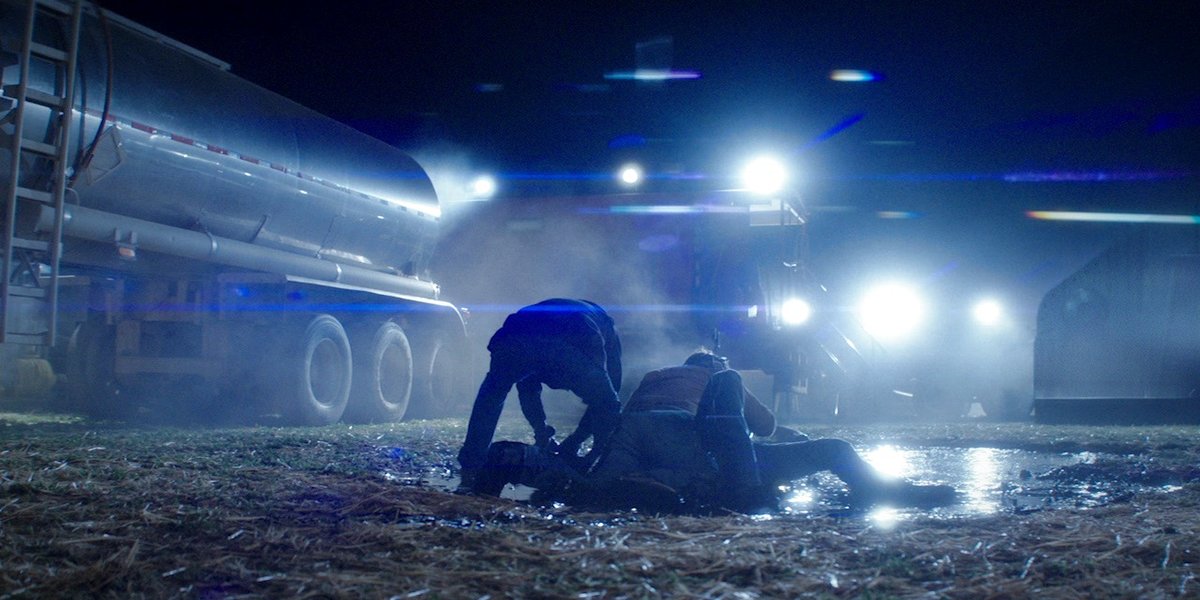 The closing scene of the first Blood and Oil episode features a brawl between Don Johnson’s oil baron character and his son in a puddle of jet-black crude. But North Dakota’s light, sweet crude is actually amber in color. Oops.

“Fracking Hell’s” producers came into Williston with the notion that violence and gang activity would be everywhere. But when they couldn’t find either, they apparently decided to manufacture some.

According to local accounts, a scene in which the narrator claims police are breaking up a fight between bikers at a bar is completely fabricated. There was actually no violence that evening, and the Williston police officers in the scene were just visiting with bar patrons:

“They came here just to get a story to make money,” one of the men who can be seen briefly on the show standing in front of the bar told the Williston Herald. “They didn’t talk to anybody, they just recorded, and made (expletive) up. Everything (was) slander, slander, slander.”

The scene concludes with a shot of two of the men involved in a conversation with police storming off on motorcycles. The narrator indicates that they are members of a biker gang and are heading uptown to cause trouble – a claim that the bar owner immediately debunked.  From the Williston Herald:

“They should try to make something that shows what Williston is really about. I wouldn’t want to be here if it was really like that, and I sure as hell wouldn’t want to be running a bar if it was like that,” said Ginger Peterson, manager of The Shop, a downtown biker-themed bar that filmmakers sought to use as an example of outlaw motorcycle gang activity.

Considering all this, we’re certainly not surprised to discover that “Once Upon a Time” (what show is that now?) is beating “Blood & Oil” in ratings.

The Williston mayor Howard Klug perhaps put it best when he said,

“Obviously, the show’s creators haven’t been to Williston.”

“Blood and Oil” and “Fracking Hell” are shows about oil that have nothing to do with oil, because if there was an actual show about energy development – accurately depicting all the paperwork and regulations and the rigorous procedures in place – it would be one of the most boring shows on television!