Top Ten Reasons To Be Thankful for Fracking This Thanksgiving

Americans will soon be gathering to express gratitude for all this great country has to offer this Thanksgiving, and there is plenty to be thankful for courtesy of the shale revolution.

Here are the top 10 reasons to be grateful for the shale revolution this Thanksgiving:

Approximately 42 million Americans will be hitting the road on Turkey Day, and those travelers will arrive at their destinations with some extra cash to spend on Black Friday thanks to the lowest gas prices in years. The Energy Information Administration has the prices across the country here: 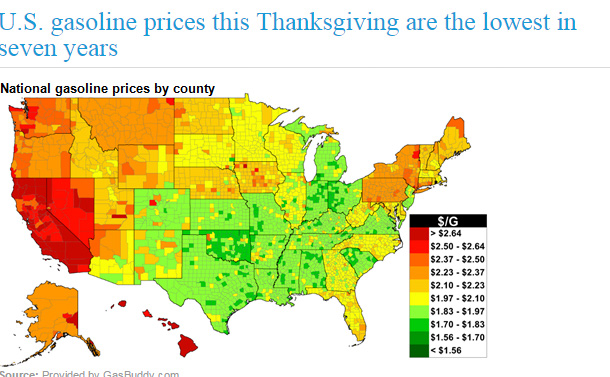 Average gasoline prices fell below $2 a gallon in 18 states last week and are expected to drop below the $2 threshold nationwide by Thanksgiving – that’s the lowest national average since 2008. GasBuddy predicts prices could continue dropping through December due to continued low crude oil prices (made possible by fracking) and a number of refineries coming back online following seasonal maintenance.

Once you get to your destination, shale development is also helping to lower how much it costs to cook your thanksgiving meal. According to Consumers Energy – Michigan’s largest utility – consumers are expected to spend 25 percent less than last year for the necessary energy it will take to cook a full Thanksgiving meal.

Consumers Energy even went as far as to breakdown the energy costs for each different Thanksgiving dish:

Some parts of the country are already finding themselves in the throes of another long, cold winter. But thanks to low natural gas and oil prices, most U.S. homeowners won’t feel a bitter chill when they get their heating bills this winter.

The Energy Information Agency (EIA) is forecasting 10 percent lower heating bills this winter, an outlook based in large part on the fact that half of U.S. households are heated with natural gas. Those who use heating oil and propane can expect even bigger savings of 25 and 21 percent, respectively.

Three of the most dangerous air pollutants have declined dramatically since 2005, while natural gas production – made possible by horizontal drilling and hydraulic fracturing – has skyrocketed. It’s no coincidence, as EPA administrator Gina McCarthy has acknowledged: 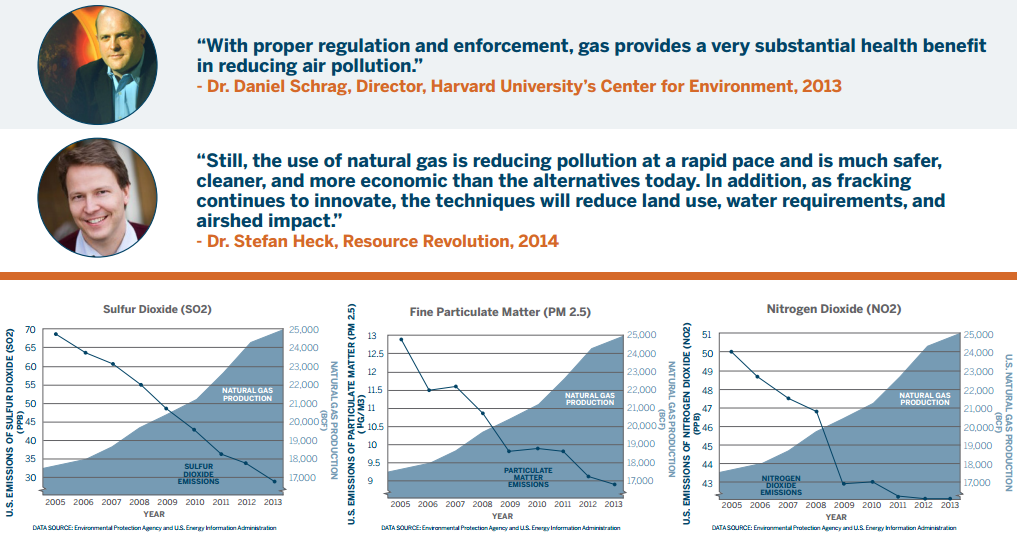 Shale development has fueled the transition to cleaner burning natural gas which has meant that our greenhouse gas emissions have declined significantly. In fact, a report released this week from the EIA found that C02 emissions fell in almost every state in the nation from 2005 to 2013. 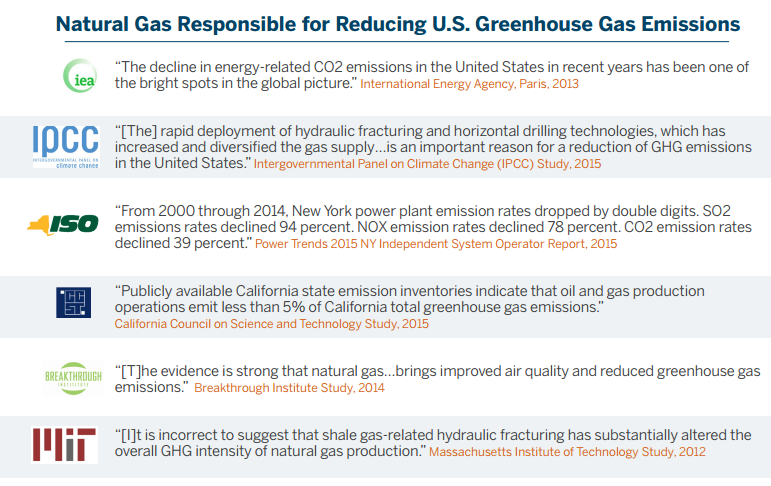 The United States is the only country in the world to achieve such significant reductions. In fact, electricity-related CO2 emissions dropped to a 27-year low in April. Without domestic shale development and increased end use of natural gas this first major step in getting a grasp on climate change would have never been possible.

With shale development continuing to expand across the country, the roll out of large scale renewable projects have also picked up traction. Natural gas – derived from fracking – has been providing the necessary baseload for renewable power generation when those sources of energy aren’t able to meet demand. Academics as well as national and international agencies have pointed to the harmony between gas, wind and solar:

For a real world example, take look at the Ivanpah, the world’s largest solar concentrating plant has needed to ramp up its use of natural gas to offset cloudy conditions and meet public demand for electricity. Without the abundance of domestic natural gas projects like Ivanpah would have been impossible.

A recent Dartmouth study confirmed what many have suspected for years: the Great Recession would have been much worse if not for the shale revolution. According to the study, new oil and gas extraction led to an increase in aggregate U.S. employment of 725,000 and a 0.5 percent decrease in the unemployment rate during the Great Recession. The report also noted the ripple effect of economic development realized 100 miles from active development:

It’s projected that upstream oil and natural gas activity will create 2.5 million jobs this year, which will continue to lift communities out of the recession.

It used to be much more economical to manufacture goods in places like China, but thanks to shale development here in the United States, all that has changed. A Boston Consulting group recently found that the average cost of manufacturing goods in the U.S. is currently only 5 percent higher than in China. The group predicts that by 2018, those manufacturing costs will be 2 or 3 percent lower here in America. From a Fortune article:

“But perhaps the single largest factor is that fracking has helped dramatically drive down the price of oil and gas that’s being used in energy intensive industries such as steel, aluminum, paper and petrochemicals. BCG calculates that U.S. industrial electricity prices are now 30% to 50% lower than those of other major exporters.” (emphasis added)

Lower energy costs are re-shoring American manufacturing jobs and generating major industrial investments back to the United States. This past year the Linde Group revealed its plans for a $200 million expansion for its La Porte Texas industrial complex. The company announced that its expansion was a result of a “competitive edge” over its competitors in other parts of the globe.

Thanks to shale, the U.S. is less reliant on foreign energy sources than it has been in decades. Proven reserves of natural gas rose to record highs in 2014, while proven oil reserves rose to their highest levels since 1972, according to the EIA. EIA analysis also shows the U.S. is now on track to become a net energy exporter by 2020 thanks to a dramatic increase in domestic oil and natural gas production, which has increased six years in a row. The U.S. hasn’t been a net exporter of energy since the 1950s.

Perhaps even more importantly, the U.S. also now has leverage on the diplomatic front as a swing producer. We now have the ability to influence the price of oil and shift power to our side — something even well-known fossil fuel opponent John Kerry has acknowledged, saying the shale boom has “created incredible new possibilities” in diplomacy and “has had a profound impact on the budgets and choices of countries that have been creating some problems.”

Reason #10: America’s Oil and Gas Industry is Putting Hardworking Americans Back to Work

It’s no surprise that America’s oil and gas industry has been a huge job creator over the last decade. In fact, over 1 million hardworking Americans get up every day and head to work so we have access to more affordable energy. But until you see it firsthand, like many of us who live in areas of shale development across the country, you might not get it. Here’s an excerpt from a guest post an Ohio University student submitted to EID that will hopefully put this into perspective:

In 2011, my dad made a decision that changed our lives for the better. He enrolled at the New Castle School of Trades to get his commercial driver’s license (CDL). He took money from his 401(k) to pay for our bills and his tuition. After only six weeks, he completed the course.

In November 2011, he began his first job in the oil and natural gas industry at Keane and doubled his salary from when he worked two full time jobs. After six months, he went to work for Multi-Chem, a Halliburton owned company. This increased his pay even more.

My dad’s new schedule had him working ten days with five days off, which meant I could see him a lot more often. He was home for major holidays and finally able to go on family vacations. I don’t think I could explain the amount of excitement in our family when my father could be there to share memories with my mother, brother, and me. During this time, my dad’s employment became even more vital, as my mother had to file for disability.

My dad always encouraged me to go for my dreams. His mantra is that determination equals success. I knew what I wanted to do with my life. I wanted to go to college at Ohio University to study political science. Now, here I sit, in large part due to my father’s resolve to give me opportunities I need to succeed.

I can honestly say that if it weren’t for the oil and natural gas industry, I wouldn’t be here. It took only six weeks for my dad to change the course of our lives.

From everyone here at Energy In Depth: we wish you and your family a happy and healthy Thanksgiving!