The U.S. energy revolution that’s taken place since 2000 catapulted the country to become the global leader in petroleum, including oil, and natural gas production in 2018, according to a recent report from the Energy Information Administration:

“Last year’s increase in the United States was one of the largest absolute petroleum and natural gas production increases from a single country in history.”

From a Competitive Race to Undisputed Leader

In 2008, the United States lagged far behind Russia and Saudi Arabia in petroleum production, generating an output of approximately 13 quadrillion BTUs, compared to more than 20 quadrillion BTUs from the other two countries. Within a decade, not only had the United States caught up to the production totals of Russia and Saudi Arabia, but it surpassed them in 2018 with a record-breaking 11 million barrels of crude oil per day. 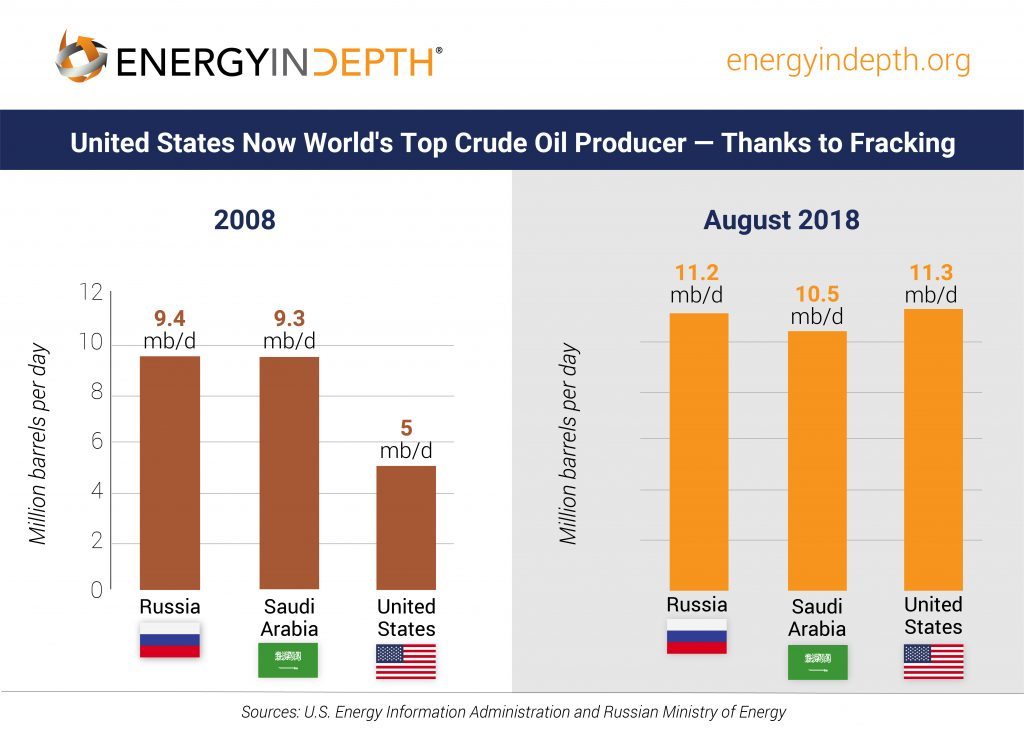 As EIA explains, this American oil production growth was driven by production in the Permian Basin of western Texas and eastern New Mexico.

In natural gas, the U.S. and Russia were neck-and-neck for years until 2012 when the shale revolution powered the United States. In 2018, the U.S. produced 31.5 quadrillion BTU of natural gas, another record, and continues to outpace Russia year after year.

Another factor helping to drive record natural gas production is that U.S. liquefied natural gas exports have skyrocketed since 2016, thanks to increased foreign demand for U.S. energy.

The growth in U.S. LNG and overall increased global demand for natural gas is changing how Europeans receive this resource, according to Pipeline & Gas Journal:

“Europe’s two biggest suppliers of pipeline gas, Norway’s Equinor and Russia’s Gazprom, have lost market share for the first time in at least four years amid a tripling in LNG imports into the region over the past 10 months. … LNG from the United States into northwest Europe accounted for 2 percent of total gas supply into the region, contributing to the strong increase in LNG in Europe.”

Growing oil and natural gas production in the U.S. has turned the nation into an energy superpower and it has surpassed traditional rivals like Russia and Saudi Arabia. It’s also ensured that allies in Europe have a steady supply due to increased LNG exports. It’s a win-win outcome that’s powered the American economy at home and helps maintain a strong presence on the international stage.