U.S. Metropolitan Areas Getting Big GDP Boosts, Thanks to Shale

A new report from the Bureau of Economic Analysis (BEA) recently highlighted the economic growth throughout metropolitan areas in the United States in 2014. According to the report, real gross domestic product (GDP) increased in 282 of the nation’s 381 metropolitan areas. While several industries led this growth, there was a strong contribution from natural resources and mining. From the report’s news release:

“Although natural resources and mining was not a major contributor to growth for the nation, this industry contributed to strong growth in several of the fastest growing metropolitan areas. Mining in the Permian Basin and Cline formation led to notable growth in total real GDP for Midland, TX (24.1 percent) and San Angelo, TX (11.4 percent). Mining in the Marcellus shale formation contributed significantly to the 9.5 percent increase in total real GDP for Wheeling, WV.”

Thanks to shale development, energy producing states are outperforming other parts of the nation and growing their cities’ economies at incredible rates. From the BEA report, here are the fastest growing metropolitan economies:

While these cities lie in different geological regions, they do have one thing in common: shale development. Oil and gas development in these cities was the biggest economic driver throughout 2014. For instance, take a look at the Greeley, Colorado metropolitan area, which encompasses Weld County, where a large percentage of shale development is taking place. It grew its GDP by 9.9 percent in 2014 and ranks fourth in the nation in terms of percent growth. According to a BizWest.com article:

“Greeley’s 2014 growth was dominated by the mining sector, which includes oil and gas extraction, growing by 24.6 percent from the previous year.”

Another shale success story is Wheeling, West Virginia which ranked 5th in the country for fastest growing metropolitan. Wheeling is known for some of the most successful Utica shale wells in the country and thanks to this booming oil and gas industry companies are investing in the region and creating well-paying jobs.

Shale development also indirectly helped some cities make the above the list. Take Lake Charles, Louisiana: thanks to increased domestic oil and gas development, companies are investing in petrochemical plants and locally based refineries. It was recently announced that a Thailand based company plans to invest $175 million to renovate and restart a dormant ethane cracker in Lake Charles, Louisiana. These types of large investments would have never been possible without the continued development of our domestic shale resources. 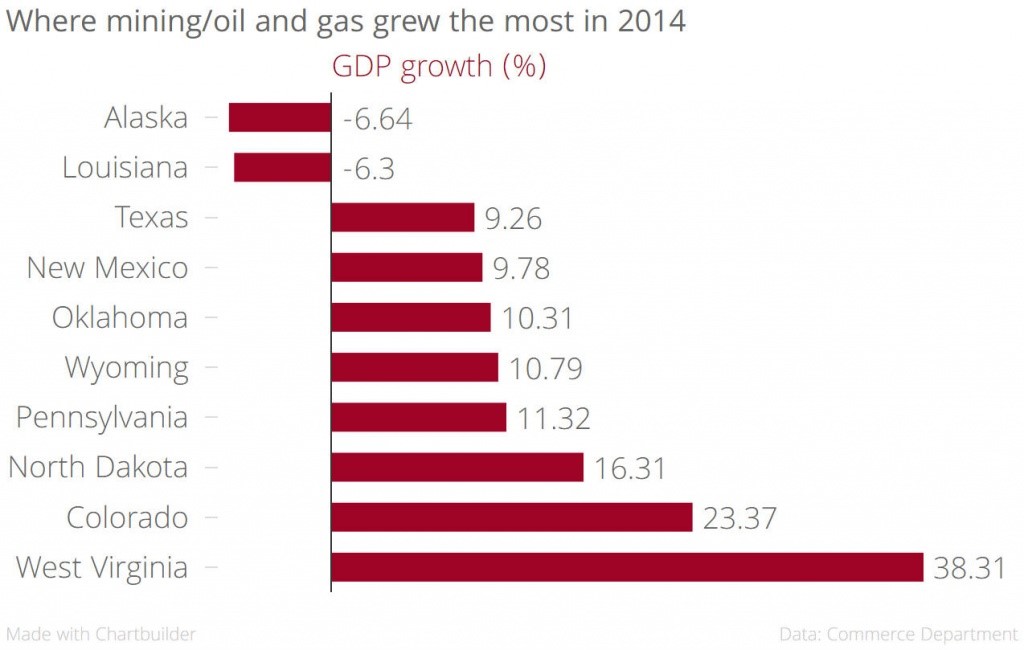 While some cities did not see the amount of GDP growth that others did, states across the country have benefitted from shale development. Natural resources and mining was Pennsylvania’s fastest growing sectors and as a whole, and the state was able to grow its GDP by 11.32 percent in 2014. According to a recent TibLive.com article:

“Mining contributed $6.6 billion, or 5.3 percent, to the total dollar value of goods and services produced in Pittsburgh last year.”