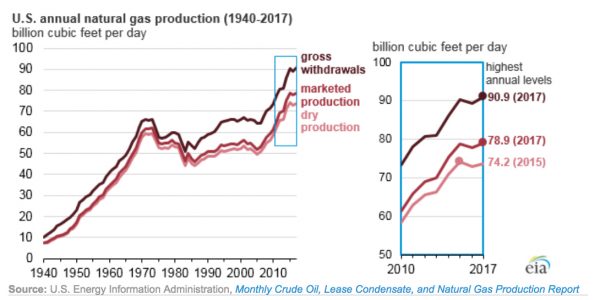 According to the EIA’s latest data, gross withdrawals of natural gas were 90.9 billion cubic feet per day (Bcf/d) last year, breaking the previous record of 90.2 Bcf/d set in 2015. The EIA defines gross withdrawals as follows:

“Full well stream volume from both oil and gas wells, including all natural gas plant liquids and nonhydrocarbon gases after oil, lease condensate, and water have been removed. Also includes production delivered as royalty payments and production used as fuel on the lease.”

EIA notes that this record production was spearheaded by a 1 Bcf/d year-over-year increase in Louisiana production and continued surging Marcellus and Utica shale output in the Appalachian Basin. As the following EIA chart illustrates, the Appalachian Basin — including Pennsylvania, Ohio and West Virginia — not only retained its title as the nation’s most prolific natural gas producing region, its gross withdrawals increased from 22.2 Bcf/d in 2016 to 24.3 Bcf/d in 2017.

EIA reports that Ohio enjoyed the largest state-level percentage increase in natural gas withdrawals in 2017, increasing 24 percent to 4.9 Bcf/d. This prolific production is just one reason a recent report argued the Appalachian Basin is the most profitable region for petrochemical investments.

Even more remarkably, the shale gas revolution appears to be only in the second or third inning, as both the EIA and International Energy Agency (IEA) project U.S. production will increase dramatically over the next four years. 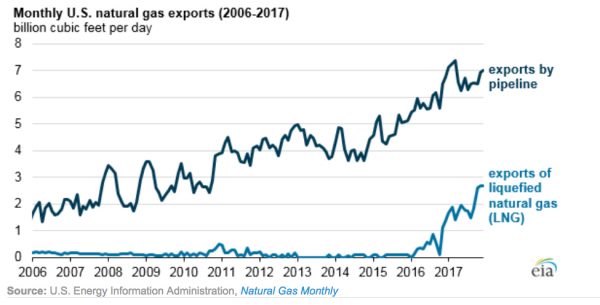 The EIA believes that growing natural gas exports will be coupled with increasing domestic consumption as well. From the report:

These developments are simply remarkable considering media outlets such as TIME magazine were publishing stories headlined “Why U.S. Is Running Out of Gas” as recently as 2003, while the Post Carbon Institute’s David Hughes and other “peak gas” pundits were making the following claims as recently as 2006:

“Only about four percent of the world’s reported gas reserves are in North America. If you look at world natural gas to production ratios, how long they will last at current production rates, we can see that North America has about 10 years.”

Flash forward 12 years from when Hughes made that claim, and the U.S. not only has not run out of natural gas, it has more of the clean-burning resource than it has at any time in its history — all thanks to fracking.